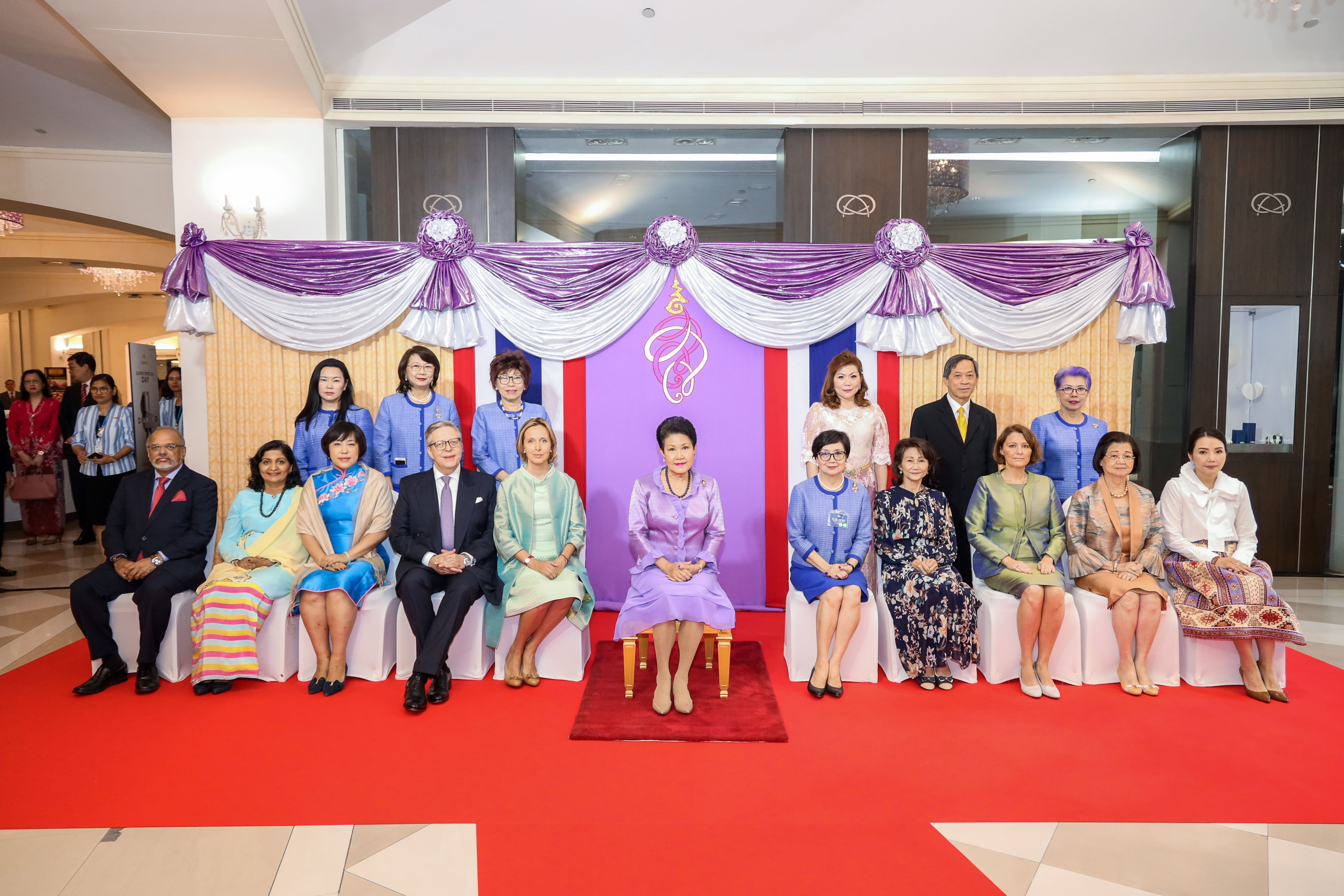 The YWCA of Bangkok was officially established and registered as an association in 1947.  Located in the heart of Bangkok on Sathorn Tai Road with many foreign embassies as its neighbours, when the organization purchased this property using the funds contributed by the YWCA of the USA and those raised from their first bazaar, there was just an old house in a large compound.  Over the years, changes have been made, but it is here that most activities and services still take place. “Our visions are a fully inclusive world, where justice, peace, human dignity, freedom and care for the environment are promoted and sustained through women’s leadership by Christian principles”, shared the association’s hard-working president, Mrs Usana Sukhothsub, who chairs all fundraising activities. “Through the grace of God, we are very blessed to have successfully organized the YWCA Diplomatic Charity Bazaar in November every year.”

Since its establishment, the YWCA of Bangkok has provided support for social development through various charity projects.  Mrs Usana proudly explained, “The YWCA of Bangkok celebrated its 72nd Anniversary in 2019.  If the association were a human being, it would have completed its very auspicious 6th cycle of the Thai zodiac and grown into a beautiful adult. Fortunately, God has blessed the YWCA of Bangkok with the strength to service His ministries.” She credited the success of the charity event to the cooperation of the YWCA of Bangkok, spouses of the ambassadors to Thailand of various countries and Central Pattana Public Co, Ltd (CPN). In 2019, the proceeds from the YWCA Diplomatic Charity Bazaar were used to support more than 40 charity projects in the areas of education, health, quality of life and victim relief to those underprivileged in Bangkok and other provinces.

The bazaar was initiated in 1951 by the association’s Thai and foreign board of directors and originally called the “Christmas Bazaar” as it was held around Christmas and was fortunate to receive royal support from Her Majesty Queen Sirikit The Queen Mother and the Royal family who have continued to preside over the opening ceremony every year.  HRH Princess Soamsawali Krom Muen Suddhanarinatha has graciously presided over the ceremony since 1995. For many years, the bazaar was held at the YWCA headquarters at 13 Sathorn Tai Road, before the current 31-storey BKI building was built.  This joint activity was the basis for the long, endearing relationship between two groups, one Thai and the other diplomatic spouses, sharing the mutual goals of helping the needy and contributing to their enrichment.  Later, the Christmas Bazaar was renamed the YWCA International Bazaar using Queen Sirikit Convention Centre as the venue until 2002 when Seacon Square Srinakarin offered the YWCA free use of its shopping complex.

The bazaar venue next moved to the more convenient CentralWorld at the heart of the Bangkok Ratchaprasong shopping district in 2006 when the former CEO of Central Pattana Public Co, Ltd (CPN), Mr Kobchai Chirathivat, approached the YWCA of Bangkok executive director, Ms Noreerat Noparatanaraporn, and invited the association to use CentraWorld as the venue for the annual YWCA Diplomatic Charity Bazaar, where it continues to be held. Mrs Usana went on to say, “The YWCA of Bangkok is very fortunate to have the support of many professional, well-connected diplomatic and local leaders as advisors to the organizing committee, despite their busy schedules.” The 67th YWCA Diplomatic Charity Bazaar 2020 is scheduled for 13-15 November (Friday – Sunday) this year at CentralWorld.  A variety of attractive products will be on display, from exquisite jewellery, delicate handicrafts, radiant cosmetics, charming souvenirs and splendid home décor, to healthy cuisine, superb wine and beverages.

Madame Christina Macpherson, the wife of the New Zealand ambassador to Thailand and president of SHOM (Spouses of the Heads of Missions), chairs this year’s organizing committee. She was very kind to share her vision for this year’s event.

“I am really honoured to undertake the role of chairperson of the Diplomatic Executive Committee for this event.   It is my hope that the committee, with the guidance and support of YWCA representatives and the executive board led by Mrs Usana with advisory members Mrs Suvimol Mahagitsiri, M.L. Poomchai Chumbala and Mrs Sirin Artinian, can plan and implement a safe and successful 67th YWCA Diplomatic Charity Bazaar at CentralWorld in November. “As in previous years, we are grateful to participating embassies, vendors and partners for their involvement to help make this annual event possible. We are also very appreciative to the Central Pattana PLC (CPN) for their gracious gift of space, support with organizing and for hosting the event each year at CentralWorld.” With concern for “social distancing” measures, Madame Chrissy said, “There is no question that the Covid-19 pandemic has had a significant impact on Bangkok and around the world. I am confident that the YWCA in Bangkok will work closely with CPN to take appropriate measures to ensure visitor safety, including taking body temperature, providing hand sanitizer, maintaining social distancing among visitors and serving fresh, hygienic food.  We will also likely see a reduction of booths to allow for safe social distancing.”

Therefore, for the first time, an online marketplace, “YWCA Online Charity Bazaar 2020”, will be available from 1 November to 31 December 2020 as part of the event’s fundraising activities for charity projects.  Those interested can access this through two channels, Facebook Page: YWCA Charity Bazaar or Instagram: ywca.charitybazaar.