Chanthaburi – City of the Moon 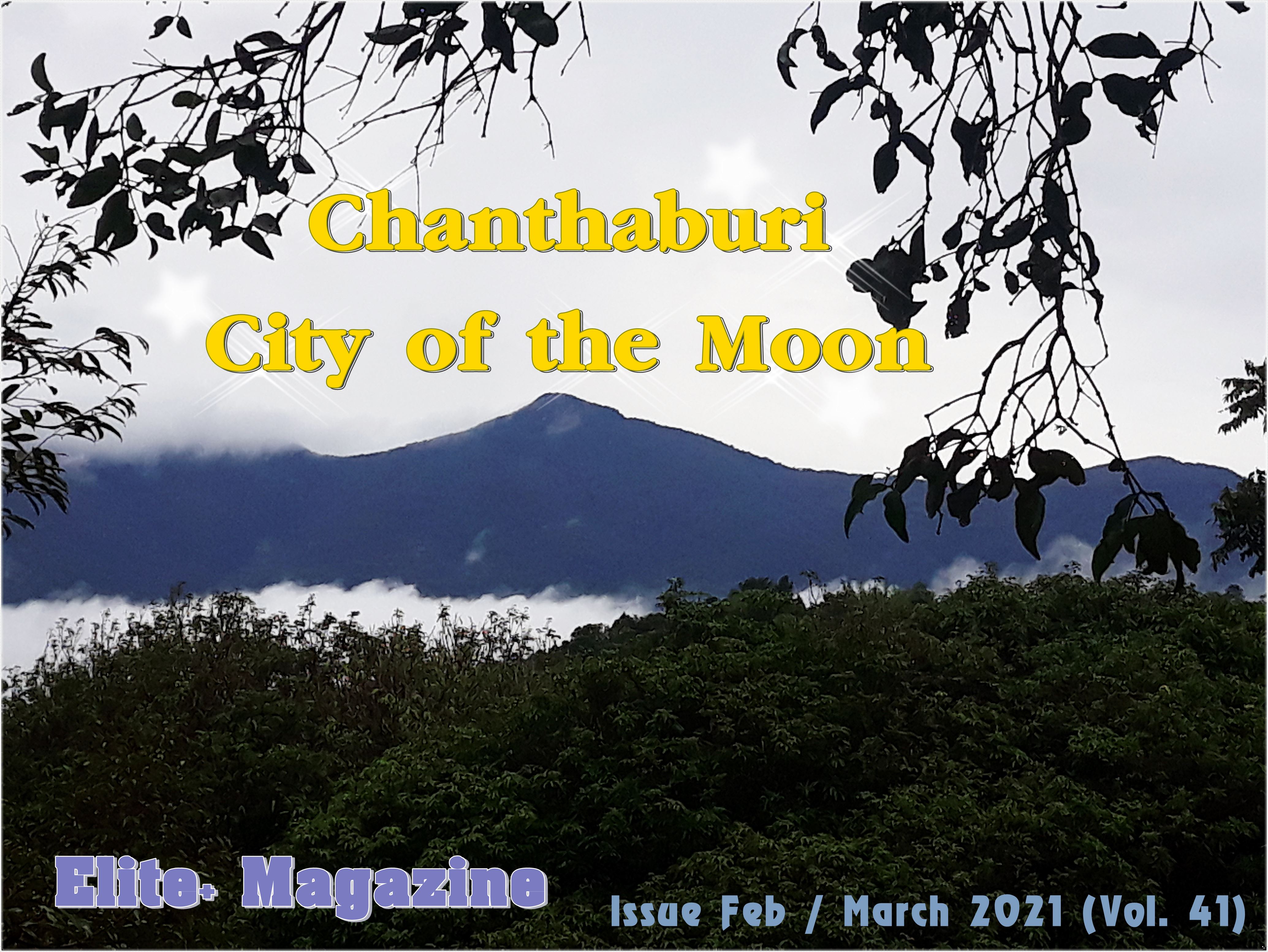 Just before the New Year arrived, December 29th, to be exact, the moon rose full and bright over the Cardamom Mountains that extend from Cambodia in the west into the eastern Thai province of Chanthaburi, which is translated as The City of the Moon. It appeared so clear and close that it felt like I could almost touch the rabbit in the centre of the white sphere. That is from the foothills of Khao Soi Dao (Star Catcher Peaks as I translate the name), with the southern peak of this north-south range, the province’s tallest summit, rising nearly 1,700 metres above sea level. Within the Khao Soi Dao Wildlife Sanctuary is one of the most beautiful cascading waterfalls, Namtok Khao Soi Dao, comprising 16 tiers beginning close to the peak and dropping to the sanctuary’s floor. The butterflies that swarm and flutter about in a spectrum of colours in the dense rainforest and above the shimmering waters bring many lepidopterists, someone who studies moths and butterflies while the many species of birds bring ornithologists, birdwatchers. The sanctuary is also home to a variety of wild flora and fauna, both big and small, from mammoth elephants to the tiny endemic Spiny Breasted Frog. But this is just one of the many attractions that have brought us to this lush and fertile, undulating terrain, known as the eastern Thai fruit basket with orchards producing the finest durian, mangostene (mangkut), rambuttan (ngor), tamarind (makham), snake fruit (rakam) and salak (sala), plango (maprang and mayong-chit) and longkong along with fruit of the north, lychee (linchi) and longkan (lamyai) and the those found nearly everywhere, mango (mamuang), papaya (malakor), jack fruit (khanoon) and more. Then, there are the native peppercorn vines growing up posts set in rows. Called Prik Thai, Thai pepper, it is a favourite condiment, both fresh and dried and ground, in many Thai dishes. In the past, it was an important trading commodity with the French when they ruled nearby Indochina. In fact, following the infamous Paknam Crisis in 1893 when the French sent a gunboat up the Chao Phraya river to stop Siam from demanding an annual tribute from the vassal Lao kingdom, which was also part of French Indochina, French troops occupied Chanthaburi until 1905, and this can be seen in some of the old structures, like the Customs House at Laem Singha beach as well as buildings in town lining the Chanthaburi River along the

Sukhaphiban Road, the first paved street in the province. Known as Chanthaboon Waterfront, this was Chanthaburi’s first settlement, dating back to the reign King Narai of Ayutthaya when it served as an important centre for trade. Then, you would have seen Thai farmers bargaining with Chinese merchants, Siamese or French troops having a drink or meal as well as Chon miners, Khmer sailors and Vietnamese coolies. Today, while much quieter, its heritage is being restored. Many of the ancient Sino-European row houses have now been transformed into cosy cafés and restaurants with verandas on the river as well as tasty noodle shops, attractive galleries and tiny boutiques. Two of the more impressive restorations located at the centre of the lane on the western river bank are the 150-year-old Baan Luang Rajamaitri Historic Inn and the even older Baan Bunyatthiti House. The former, recognized by UNESCO in 2015 as “an innovative new social enterprise model of urban heritage conservation”, was the home of a beloved noble for which the house is named who introduced Para Rubber tree plantations to Chanthaburi and the neighbouring east coast provinces. The latter, just opened last year, is a beautiful representation of the Chinese-style home that was popular among Chinese who moved abroad and would display their quite eclectic collections of Chinese items as well as Western and, in this case, local Thai. At the north end of Sukhaphiban Road, overlooking this 1-kilometre lane, is the ornate 19th-century ordination hall of Wat Bot Muang with its gold-painted chedi that as night descends creates a magical ambience with its reflection shimmering on the river. This is further enhanced by the soft hue created by lampposts with golden depictions of the mythological Kinnaree lining the quaint walking street. At the southern end is an arched pedestrian bridge over the river that leads to the Gothic-style Cathedral of the Immaculate Conception that is said to imitate the Notre Dame de Paris. First erected in 1711, it has actually undergone five reconstructions to meet the needs of a growing Catholic population as refugees came to Thailand from southern China and mostly Vietnam. In 1944, while the Japanese occupied the Kingdom and again returned the province to Thailand, the church was elevated to a Cathedral and named the seat of the Bishop of Chanthaburi. While the very bright stained-glass windows depicting different Catholic saints are quite beautiful, it is the statue of the Virgin Mary on a gold dais by the alter that captivates visitors with its adorning few hundred thousand semi-precious gems reflecting the skills of local artisans. Many of these dazzling stones are probably from Srichan Road, better known by locals and those in the trade as Gem Street, which is just a short walk after recrossing the bridge. Here on weekends Srichan and a cross street, Trak Kachang, are transformed into a congested international gem trading fair with rows of shops and makeshift tables set up along the sidewalks where venders display their rough cuts and polished gems and buyers search for something that catches their eye; after which, negotiations, sometimes heated, take place. This has been happening since 1962 when Myanmar, then Burma, closed its borders to foreigners and Chanthaburi became an important market first for its own crimson and scarlet rubies and translucent sapphires and, soon after, for semi-precious and precious stones from around the world. After our stroll through the market, we had to make a stop at the City Pillar and Shrine of King Taksin the Great, located on Tha Luang Road next to the Taksin Marine Camp on the northern most hilltop watching over the provincial capital. After Ayutthaya fell to the Burmese in 1767, Taksin, then the Lord of Tak, led an expeditionary force to Chanthaburi to put down an insurrection, but instead recruited more troops and marched back to subdue the Burmese army in 1794 after which he established the Siamese Kingdom of Thonburi. So, he is considered by many their saviour and thus patron of the province. The shrine itself can be recognized from afar by its blue, gilded nonagon roof that resembles the hat the great king would wear. Locals and visitors alike come to pay homage to the blackened brass sculpture of the king seated upon a throne as many believe his spirit continues to watch over them. It should not be forgotten that Chanthaburi is bordered to the south by the Gulf of Thailand and so in addition to exceptional fruit, it is also a hub for fresh seafood where you can dine on the freshest prawns, crabs, oysters and squid, large and small and scallops as well as cockles, muscles, and a wide assortment of fish. There are also some very nice beaches, some offering bungalows, like Chao Lao, or just spectacular scenery and dining like Laem Sadet, Kung Wiman, Ao Yang, Ao Krating and Laem Singha. Chanthaburi offers a lot, and so the provincial slogan, while long, does say it all:

"Magnificent waterfalls, fruit basket, spicy peppercorns, gem centre, Chanthabun woven mats, hats and accessories, fertile nature and gathering place of King Taksin the Great's Liberation Army". Just 215 kilometres or a few hours travel from Bangkok, it is easy to understand why it is well worth a visit.