West Papua: In Search of the Birds of Paradise 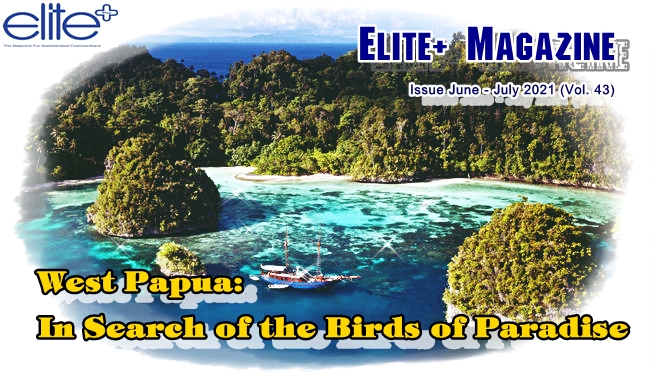 My new adventure took me on a long and tiring journey to West Papua, a province in Indonesia located on the island of New Guinea, which is the world’s second largest island after Greenland. New Guinea is equally divided into the independent nation of Papua New Guinea on the eastern part of the island and West Papua on the western part. As a wildlife photographer and a birder, I have been captivated by stories, video clips and photographs of the birds of paradise I have seen in magazines, books and websites and thus planned to visit Papua New Guinea or West Papua, both habitats of birds of paradise. There are forty-two species of birds of paradise that can be found only on New Guinea and nearby islands. I consulted an Indonesian travel company whose services I employed on my previous trips to Sulawesi and Kalimantan and learned to my dismay that the habitats of the birds of paradise were not located in one site or even near one another. Most of the species dwell in different areas from forests in the lowlands to dense jungles in the high mountains of New Guinea and West Papua. I thus felt compelled to embark on several trips to cover all of the species. The travel company advised me to begin with the most accessible way to see some species of the birds of paradise by going to Ishio Hill Birdwatching Lodge in Nimbokrang, West Papua, where I would certainly see at least four species – the lesser bird of paradise, twelve-wired bird of paradise, king bird of paradise and pale-billed sicklebill. The adventure commenced with a flight from Bangkok to Jakarta, continuing on a connecting flight for eight hours to reach Jayapura near the Papua New Guinea border. A rented car with a driver provided by the travel company took me on a forty-minute drive past rubber plantations and forests to Nimbokrang and my final destination at Ishio Hill. I was welcomed by Alex Waisimon, an indigenous Papuan, who had turned the forest of 190 square kilometres he had inherited from his grandfather and father into a well-known sanctuary for birds of paradise and many endemic and rare birds of West Papua. At four o’clock in the first morning at Ishio Hill, Alex and I left the lodge on a forty-minute walk to a spot where we could witness male lesser birds of paradise courting females. Arriving before sunrise, we set up our cameras about 100-150 metres away from a large tree which would become a courtship venue of the lesser birds of paradise species. As the light of dawn appeared, we heard a high-pitched call from that tree. Alex said in a low voice that a male lesser bird of paradise had arrived, but thick leaves obstructed our sighting of the bird. Five minutes later a call from a different male was heard as another suitor showed up. Then, I saw a female perched clearly on a branch and was able to photograph her. As the two males were competing by calling and moving from branch to branch, showing off the colourful plumage their maroon-brown body, a yellow crown and long, yellow and white rear feathers, it was indeed very challenging to capture their images from the distance amid less favourable light and obstruction from leaves and branches. Soon the female left as the two males were still competing in their courting efforts. The whole activity came to a stop after thirty minutes followed by complete silence on that tree. Alex said all the birds had left and would renew their courtship attempt around three o’clock in the afternoon. The lesser bird of paradise is a medium-sized bird having a body length of up to 32 cm.

Alex then led us along a trail up the mountain that let us spot and photograph several endemic birds of West Papua, namely, a male and female red-cheeked parrot, a male golden monarch and a black sunbird. I was rewarded with a delightful surprise when suddenly a pale-billed sicklebill, another bird of paradise species, came to rest on a leafless tree thirty meters away. It stayed for only ten seconds before it flew away, but long enough for me to capture its image. In the distance I also saw a male and a female Blyth’s hornbill, also known as the Papuan hornbill, a large bird with the size of 76-91 cm, on a tree, a Meyer’s friarbird and a helmeted friarbird, but they were all too far to have a good image of the four birds. The next morning, we left the lodge again at four o’clock on foot for a tower Alex had constructed to see twelve-wired birds of paradise. From the tower, we had a clear view of a tall dead tree about forty meters away, which was where the twelve-wired birds of paradise would show up. As the sun was rising, providing sufficient light, a male silently appeared on top of the dead tree and began voicing its melodic courting call. This handsome bird with a 33cm body length had twelve long, black, wire-like filaments extending from its rear yellow plumage. A short while later, a female of a similar size, but with brown plumage and black-barred underparts, appeared on the same tree for only a few seconds; then suddenly, it left before I take a shot. The male, however, stayed on for thirty minutes, moving up and down the tree trunk displaying its beautiful black and yellow plumage and twelve wires to attract other females. But no other female came, and the male decided to end its courtship dance and flew away. That afternoon, Alex led me on a trail deeper into the hilly forest until we reached a wide roofless square-shaped platform built one metre above the ground surrounded by groves of tall trees. The platform was the most suitable spot to see and photograph the king bird of paradise, the smallest species of the bird of paradise with the male just 16cm and the female of 19cm in size. We sat in silence on the platform for half an hour until the leaves on top of a large tree about 100 metres away began to shake abruptly. A small crimson bird, apparently a male king bird of paradise, appeared periodically while feeding on fruits of that tree. Moving agilely among the dense leaves and with such a small size, the bird provided limited opportunities to get a clear shot; however, I managed to get one after several disappointing tries. On our walk back to the lodge in the late afternoon, I was delighted to spot and photograph two endemic species of the area, a yellow-billed kingfisher and a rufous-bellied kookaburra. Both species are known as tree kingfisher and do not feed on aquatic animals like the other kingfishers we’re familiar with. Their diets are insects, worms, small rodents and small reptiles. Alex delayed our return walk until the night came as we reached a spot not far from the lodge. He shone his flashlight on a tree where we saw a large frogmouth. I learned from Alex that that this Papuan frogmouth is the largest species of frogmouth with a size of 50-60cm. I spent the last day at Ishio Hill birding around the lodge and discovered a few endemic species, namely, a buff-faced pygmy parrot, the world’s smallest parrot with a size of 8-9cm; a female small red-capped flowerpecker with a 9cm body length; and a male shining flycatcher, 16-18cm in size, incubating an egg in its nest. Both male and female shining flycatchers actually take turns incubating their eggs. The next day, I continued my search for more birds of paradise, travelling to Waigeo Island in the Raja Ampat Islands Archipelago, also a part of West Papua, which I will report on in the next issue of Elite +.