Discovery of 'Omicron' in South Africa has changed the world of coronavirus. 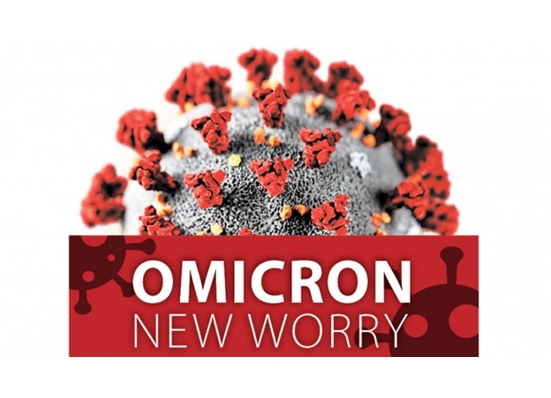 The coviral mutant "Omicron" (Omicron), or B.1.1.529, was discovered and reported to the World Health Organization for the first time. It was found by researchers in South Africa on Nov. 24 and is now found in more than 40 countries around the world, including the US, Germany, Australia and India.

The World Health Organization has designated the Omicron strain of concern as a variant of concern, as more than 50 mutations have been found, which could make the virus more prone to spread. may have a more severe illness or resistant to vaccines that are currently in use

last weekend The number of coronavirus cases in South Africa has quadrupled from 4,373 daily cases at the start of the week. More than 16,000 cases per day, and within two weeks, the covid-19 mutated "Omicron" replaced the "delta", becoming the main strain in the area. This caused the South African government to deal with the coming 4th wave of outbreaks. While many countries around the world are starting to relax their Covid measures for people to live a normal life and start accepting flights from abroad There was news of the discovery of a mutated coronavirus. causing some countries to impose restrictions on entering the country again And some countries have to delay plans to cancel the covid measures first.

Retracing the discovery of "Omicron"

Between 11-23 November, during the testing of samples infected with COVID-19 at the Lancet Lab in Pretoria south Africa Researchers have found abnormalities in a sample of infected people coming from a mass outbreak in Gauteng province. of South Africa, from Botswana and Hong Kong, found that RT PCR did not find one gene. which is usually found in viruses that have been spreading showed that the virus had a mutation. A few days later, the same anomaly was reported at a lab in Johannesburg. The researchers found that Omikron had an astonishing accumulation of nearly 50 mutations, indicating that the virus had not been discovered for a very long time. in areas without examination or surveillance of outbreaks or chronic infection in immunocompromised patients causing the virus to persist and divide and mutate continuously before spreading widely

Despite South Africa reporting to the World Health Organization on Nov. 24 about the discovery of the omikron species for the first time. It does not mean that it has just had this infection. and there will be a new mutation. As long as there is no confirmation of The "first patient" (Patient Zero) of this species.

Experts point out An epidemic of omikron may occur in southern Africa. which has no epidemiological surveillance system and the vaccination rate is still low. And finding the source of the mutation can be extremely difficult. After the infection is detected when it has spread widely. when a traveler from South Africa has brought the infection to spread in various countries In many cases, the infected are travelers from South Africa, North Africa and Nigeria.

While Scotland is trying to determine the source of the virus spreading in the area. It was found that none of the 9 patients had a history of traveling abroad before. So it is assumed that the Omicron strain in Scotland. It may begin spreading widely for the first time since the United Nations Climate Action Conference (COP26) was held in Scotland between October 31 and November 12. News of the Omikron discovery comes at a time when many countries have begun to cancel it. and relax measures to prevent covid It is open to international travelers. and return to travel across the country again in the year People started to do activities outside the home. and many countries have concerts organize a sporting event and celebrate Thanksgiving joyfully before preparing to celebrate the end of this year's Christmas

But after the World Health Organization released the Omikron, countries have resumed restrictions on entry to the country. Travelers from South Africa, Namibia, Zimbabwe, Botswana, Angola, Mozambique, Malawi, Zambia, Lesotho and Eswatini cannot enter the UK. unless you are a British citizen or Ireland Same as the US and many European countries that began to restrict travel, forbidding people from these countries to enter the country since the beginning of last week

Australia has suspended flights from African countries for 14 days to travelers who have been to Africa in the past two weeks. has been banned from entering Australia Moody's rating agency released a report that said the Discovery of the Omikron mutant caused a new uncertainty as many countries had to delay their plans to return to normal again. and also reiterated that COVID-19 is still a threat to the public health of the world. and put the global economy in uncertainty

Johns Hopkins University data shows the spread of COVID-19 Globally, starting at the end of 2020, there have been 263 million cumulative infections and 5.2 million deaths worldwide. Currently, more than 8 billion people have been vaccinated with more than 8 billion doses, most of them in wealthy countries such as the United States and Europe, while poor countries like South Africa The vaccination rate for people is only 10% of the population.