UNESCO declares the registration of Nora 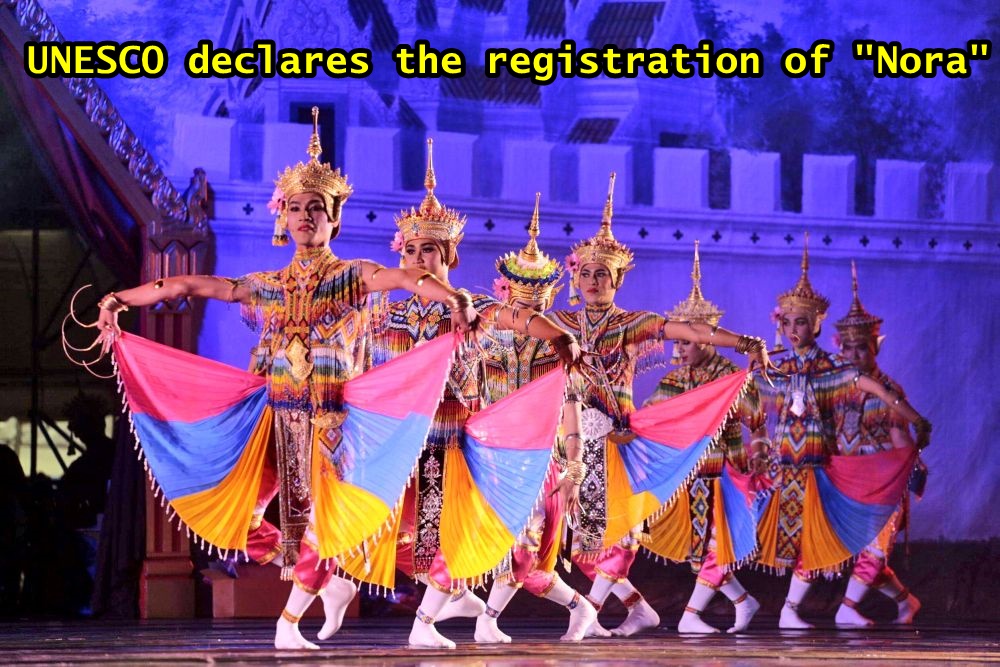 Ministry of Culture by the Department of Cultural Promotion Nora celebrations The wisdom of the land after UNESCO declared the Nora registration. It has been officially designated as a representative list of the intangible cultural heritage of humanity on December 15, 2021 in Paris, the French Republic. On December 16, 2021, Mr. Itthiphol Khunpluem, Minister of Culture (CAT), chaired the event, said that on March 12, 2019, the Cabinet resolution approved the document to propose Nora to be listed as a representative list of intangible cultural heritage. of humanity towards educational organizations Science and Culture Organization of the United Nations (United Nations Educational, Scientific and Cultural Organization: UNESCO) and it is a pleasure and pride to join another agenda for all Thai people. At the United Nations Educational, Scientific and Cultural Organization, UNESCO has announced the Nora registration. Traditional performing arts that have been passed down for a long time. and widely popular in the southern region of Thailand To be a list of representatives of the intangible cultural heritage of humanity. At the 16th meeting of the Intergovernmental Panel on the Parties to the 2003 UNESCO Convention on the Preservation of Intangible Cultural Heritage in Paris, France,

On December 15, 2021, the Intergovernmental Commission on the Preservation of Intangible Cultural Heritage approved the registration of "Nora, Dance Drama in Southern Thailand" as a representative list of tangible cultural heritage. not of humanity (Representative List) as proposed by Thailand.

The resolution was adopted at the Sixteenth session of the Intergovernmental Committee for the Safeguarding of the Intangible Cultural Heritage, held on the 13th. – 18 December 2021 in online format from UNESCO Headquarters, Paris, France by the Intergovernmental Commission Consider registering Nora because they have all the qualifications in accordance with all 5 criteria of registration type Representative List :

1. The heritage is consistent with the nature of the intangible cultural heritage. as defined in the Convention, Article 2

2. That inheritance, after being registered It will promote awareness and awareness of the importance of intangible cultural heritage. It also encourages exchange of ideas to reflect global cultural diversity. and represents the creativity of humanity.

3. Preservation measures have been carefully considered for the protection and promotion of that legacy.

4. The inheritance to be proposed is caused by the community, group of people or individuals involved. Participate as widely as possible together with the approval that comes from the first independent perception.

5. The inheritance exists and exists in the territory of the proposed State Party. which are already included in the list of intangible cultural heritage of that State Party As defined in the Convention on the Preservation of Intangible Cultural Heritage, Articles 11 and 12 Nora has value and importance as an intangible cultural heritage with a distinctive identity in the performing arts that has developed over a long period of time since the 18th-19th century and conforms to the rules of the captured cultural heritage. It must not be, as stated in Article 2 of the Convention for the Safeguarding of the Intangible Cultural Heritage (2003 Convention for the Safeguarding of the Intangible Cultural Heritage), in four branches: 1) oral 2) performing arts; 3. social practices, ceremonies and festivals; and 4) traditional craftsmanship as a performing arts that has long been popular in the southern region, rooted in community beliefs and rituals that pay homage to ancestors. There is a powerful and beautiful dance. Along with singing the song in a southern dialect that requires tact in response. with rhythmic music that gives a sensational melody The stories shown are taken from fairy tales, legends and folk literature. The costumes reflect the unique craftsmanship of the local area. At present, there are 387 professional Nora faculties in Thailand, 70% of which are concentrated around the Songkhla Lake basin. The arts, including performance, craftsmanship, music, and rituals have been passed down from generation to generation through the Nora family, community, temple and into the course of study. Teaching in educational institutions at all levels throughout the southern region and enter the course of study.

Nora is both a ritual and a performing arts for entertainment. that is rooted in the faith of the community There is a long tradition. It is of profound cultural and social significance. Nora holders and practitioners pass on the faith and knowledge gained from the ancestors. In order to inherit ethics, practice guidelines to create unity solidarity It connects cultural traditions through performing arts that are unique to the local region of the South. It is "a beautiful, powerful and lively show" and is a "dance of the southern people". Singing poems with beautiful melodies Use improvisation in improvisation. and negotiate with a local southern accent There was a couple and the music was sung with a fast and energetic rhythm. being declared registered by UNESCO considered international cooperation And to develop the promotion and preservation of the intangible cultural heritage of Thailand to be strong. It also makes people in the nation a sense of shared ownership and acceptance of cultural diversity. sparked interest in intangible cultural heritage Encourage everyone to participate in conservation which will lead to the unity of people in society and sustainable development. Department of Cultural Promotion As an agency responsible for promoting and protecting the intangible cultural heritage has announced the honor of the artist Nora as a national artist and support the establishment of the Nora Association of Thailand To carry out the project of transmitting Nora folk performances to youths as well as supporting research scholarships and set up a stage for Nora performances at local, national and international levels. as a cultural heritage of humanity by integrating with various network partners in both the public and private sectors So that Thai people can be proud and realize the importance of Nora in the next order. 1) Organizing activities for public relations Nora registration announcement It is a list representing the intangible cultural heritage of humanity.

2) Raising awareness of the importance of Nora to the media/public/young people by publicizing and disseminating the body of knowledge in various forms.

3) Creating participation of artists, Nora community, and educational institutionsTo promote the development of Nora inheritance and expanding the base of practitioners holders to be broad and strong.

4) Announcing the honor of an individual/group of person/community/organization that has promoted the succession of Nora.

The atmosphere in this press conference consists of an exhibition to disseminate knowledge about Nora registration As a representative of the intangible cultural heritage of humanity to UNESCO Beliefs and rituals related to Nora Nora's costume Nora's musical instruments and Nora's dance moves By organizing the event under strictly preventing and controlling corona virus disease 2019 (Covid 19) at the outdoor courtyard, Thailand Cultural Center.