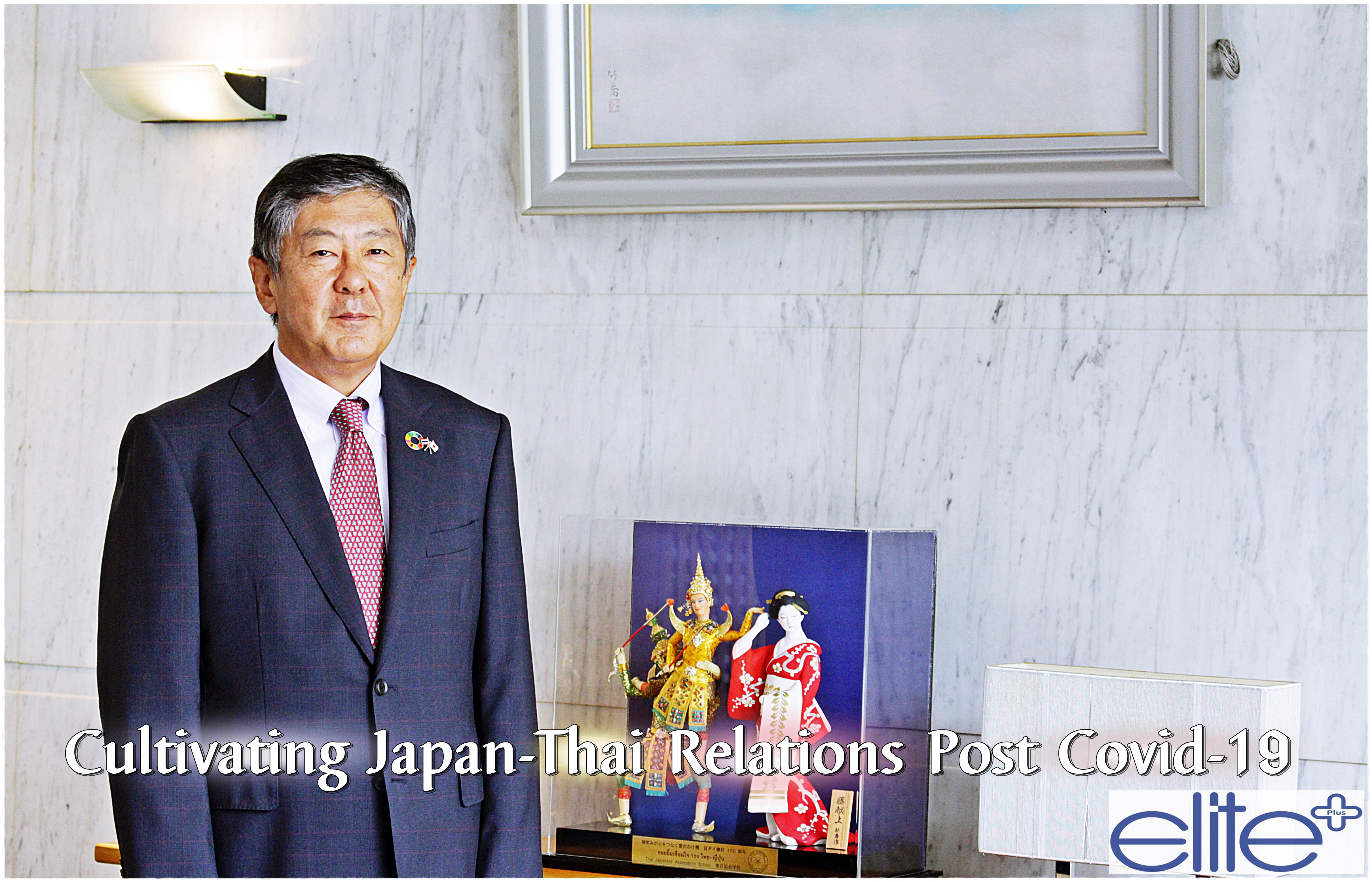 As Japan and Thailand prepare to celebrate 135 years of diplomatic relations next year, HE Nashida Kazuya, Ambassador of Japan to Thailand, recently took time to discuss with Elite+ the very long and expansive business, trade and cultural relations between Japan and Thailand as well as the recent hosting of the Tokyo Olympics and Paralympics.

HE Nashida Kazuya, Ambassador of Japan to Thailand, arrived in Bangkok in December 2019 to assume his post after an already formidable career as a diplomat. Ambassador Nashida joined the Ministry of Foreign Affairs in 1984 and since then has served at the embassies of Japan in Pakistan and the United States. Before Thailand, he was Japan’s ambassador to Iraq from 2015 to 2016 after which he returned to Tokyo to become Director-General in charge of ASEAN and Southwest Asia and Director-General in charge of the Office of Development Assistance (ODA). To begin, could you give us some background of Japan-Thailand relations?

Japan and Thailand have been fortunate to enjoy a cordial relationship for centuries. Historical records talk about relations between the Ryukyu (Okinawa) and Ayudhaya kingdoms as far back as the 15th century, which attest to our continued close ties dating back more than 600 years. Next year, in 2022, Japan and Thailand will celebrate the 135th anniversary of our now formal diplomatic relations.

I believe Japan and Thailand share a number of basic ideals such as democracy and a free market economy, which enables both countries to mutually engage in many forms of exchange in various fields such as politics, economics and culture. For the past few decades, the Japanese expat community in Thailand has grown in line with Thailand’s economic growth, and Bangkok today boasts the world’s largest or second largest Japanese community in any city outside Japan.

Before the Covid-19 pandemic, inbound and outbound tourism between our two countries increased annually in each direction. Although we have both struggled to curb the pandemic and endeavoured to tackle economic recovery, I am absolutely convinced that the continued strengthening of relations between our two countries will contribute to the economic recovery of this region in the post-pandemic era, consequently enhancing global prosperity as well. Since assuming your post as ambassador in April of last year, what have been your main focuses of attention?

I have worked to promote more instances of mutually beneficial interaction between our two countries. Since many Japanese citizens and companies are based in Thailand, as ambassador, I do my best to support them. I would like to help ensure a safe and happy life for the many Japanese nationals in Thailand, particularly during this difficult period caused by the Covid pandemic.

Japan has been supporting Thailand in overcoming Covid-19 by sending vaccines and medical related equipment. Another important objective is to continue to promote an upward trend in business and once our countries reopen, leisure travel between Japan and Thailand. My aim is to also maintain this  amicable relationship through people-to-people exchanges between Japan and Thailand Now, could you tell us about trade between Japan and Thailand as well as ASEAN?

The total trade value between Japan and ASEAN in 2020 was approximately US$190 billion. This accounts for 15% of Japan's total trade. Thailand is the largest trading partner for Japan among ASEAN countries with a total trade volume of about US$50 billion in 2020. Since the Japan-Thailand Economic Partnership Agreement (JTEPA) came into effect in 2007, trade volume has increased 1.4 times between 2006 and 2019, particularly in food and agricultural products exported from Thailand such as canned seafood and chicken products, which have both expanded by more than five times early amounts.

Japan is Thailand’s largest foreign direct investor with a stock base of US$95.3 billion in investments, representing 33% of Thailand’s total FDI. There are about 6,000 Japanese companies active in Thailand. This represents the third largest group of Japanese companies operating overseas after those in China and the US. Member companies of the Japanese Chamber of Commerce here employ 85,000 Thai people. Our expat community living here is one of our largest, numbering about 100,000 people. What advice would you give to Thai as well as Japanese entrepreneurs who would like to invest or do business in Japan or Thailand, respectively?

Japan began cooperating with Thailand based on the “BCG economic model”, following a ministerial conference in August. As the Japanese government has also formulated our “Green Growth Strategy”, these offer potential areas for further collaboration between our two countries.

Some Thai companies have developed into global entities and by combining their marketing and sales channels with Japanese companies' technological capabilities, we can expect to see further expansion of their business not only in Thailand, but also in the wider ASEAN region and beyond. Since last year, the Japanese government has been supporting collaborative projects between Japanese and ASEAN companies to solve social issues through digital technology. Like Thailand, Japan had been facing a new wave of the Covid-19 pandemic. In fact, I understand that you became infected, and I hope have made a full recovery. My question now is actually two-fold. Can you tell us how Japan has been coping and what measures you have put into place? And second, how has this affected your activities in Thailand?

Currently, both Japan and Thailand are facing the same challenges: taking action to control the Covid-19 pandemic as well as to revitalize our economic and social activities.

I have the greatest admiration for the Thai Government in its tireless efforts to combat Covid-19 such as its drive towards vaccination for all. To help Thailand overcome this pandemic, Japan, as a “Strategic Partner”, is cooperating in various ways. We donate about 2.05 million doses of the AstraZeneca vaccine as well as provided oxygen concentrators for Covid-19 patients and cold chain equipment needed for vaccine transportation and storage, and Japan will continue to extend our support in the efforts of the Thai people and government to alleviate the spread of Covid-19.

Moreover, thanks to the generous support of the Thai government, a large number of Japanese residents in Thailand, as many as 23,524 as of mid-November have been vaccinated, providing all with a sense of greater peace of mind while living and doing business in Thailand. Moving on from my previous questions, Japan not too long ago hosted the Tokyo Olympics and Paralympics. How difficult do you feel this was and were you involved in any of the promotion and if so, how?

I am really happy that it was possible to give people all over the world courage and hope by holding the Olympic and Paralympic Games in Tokyo during this Covid pandemic. It was an unprecedented event, especially after the one-year postponement and few or no spectators. I was also pleased to see Thai athletes perform so proudly and enthusiastically, especially in the Paralympics, where Thai athletes did so well. I think this Olympic and Paralympic summer reminded people of the power of sports. Furthermore, what do you think Japan gained as the host of these two events?

Japan held the summer Olympic games after a 40-year interval since the Tokyo Olympics in 1964. The Olympic games at that time demonstrated to the world that Japan had been rebuilt from the devastation of WWII as the country experienced such a remarkable economic resurgence in the aftermath. The Olympic games this time showed that Japan has become a responsible member of the global community. This year’s Olympic games helped to showcase the Japanese way of solving problems in the modern world. For example, the medals awarded were all made from recycled metal from urban centers.

In terms of our relationship with Thailand, several municipalities played host to Thai athletes. This provided a precious opportunity for both Japanese and Thai people to get know each other, and I hope the friendships that started in this way will last for a long time. Now, as restrictions are once more being lifted in Thailand, what types of cultural and investment promotional programs do you plan to implement?

The 9th generation of the academic NIHONGO (Japanese) partners program, supported by the Japan Foundation, is now engaging in activities in Thailand, but under the Covid situation, their activities are still limited as they can only contact students online. As restrictions are lifted further, their activities are expected to expand and they will once more be able to teach Japanese culture to Thai children more directly. I hope this program will promote further cultural exchanges between Japan and Thailand.

I would like to encourage your readers to dine in Japanese restaurants in Thailand and enjoy Japanese cuisine. While I also hope Thais will visit Japan, I understand it is still difficult to travel freely. Therefore, it would be great if people visit Japanese restaurants and experience Japanese food culture with their five senses. Before the pandemic in 2019, approximately 1.8 million Japanese tourists visited Thailand and 1.3 million Thai tourists visited Japan, the largest numbers ever.

As far as other cooperation between Japan and Thailand, this past July the Embassy of Japan co-hosted an online seminar titled "Envisioning the Future: Thailand-Japan Strategic Economic Partnership" with the Thai Ministry of Foreign Affairs as well as a meeting with the Thai BOI, or Board of Investment, to discuss how to make the business environment more conducive to Japanese companies in Thailand.

Since coming to Thailand, what has impressed you most?

I have been amazed at the significant presence of Japan in Thailand. Japan ranks at the top in many categories. We have the biggest population of nationals among developed countries, the highest number of companies and largest FDI here. I’m proud that among Asian countries, it is only in Thailand where Japan has achieved top ranking in these three categories. I believe that Thailand and Japan have established such a mature, mutual relationship because of our long and profound friendship that has lasted over 600 years.

If you have been able to travel around the Kingdom and region, what impressions and memories will you take with you and where do you hope to visit during the rest of your stay?

I have visited almost all the 22 Asian countries except for Brunei, East Timor and North Korea, and Thailand is one of my favourite countries. Unfortunately, due to the impact of Covid-19, I have only had a few chances to travel within Thailand. I eagerly hope that I can visit many beautiful spots in Thailand in the near future.

I believe we can overcome Covid-19 soon and it is my sincere wish that we all can travel between Thailand and Japan freely again with bright smiles very soon.