Madame Louise Åkerblom: An Economist with a Heart for Women Empowerment 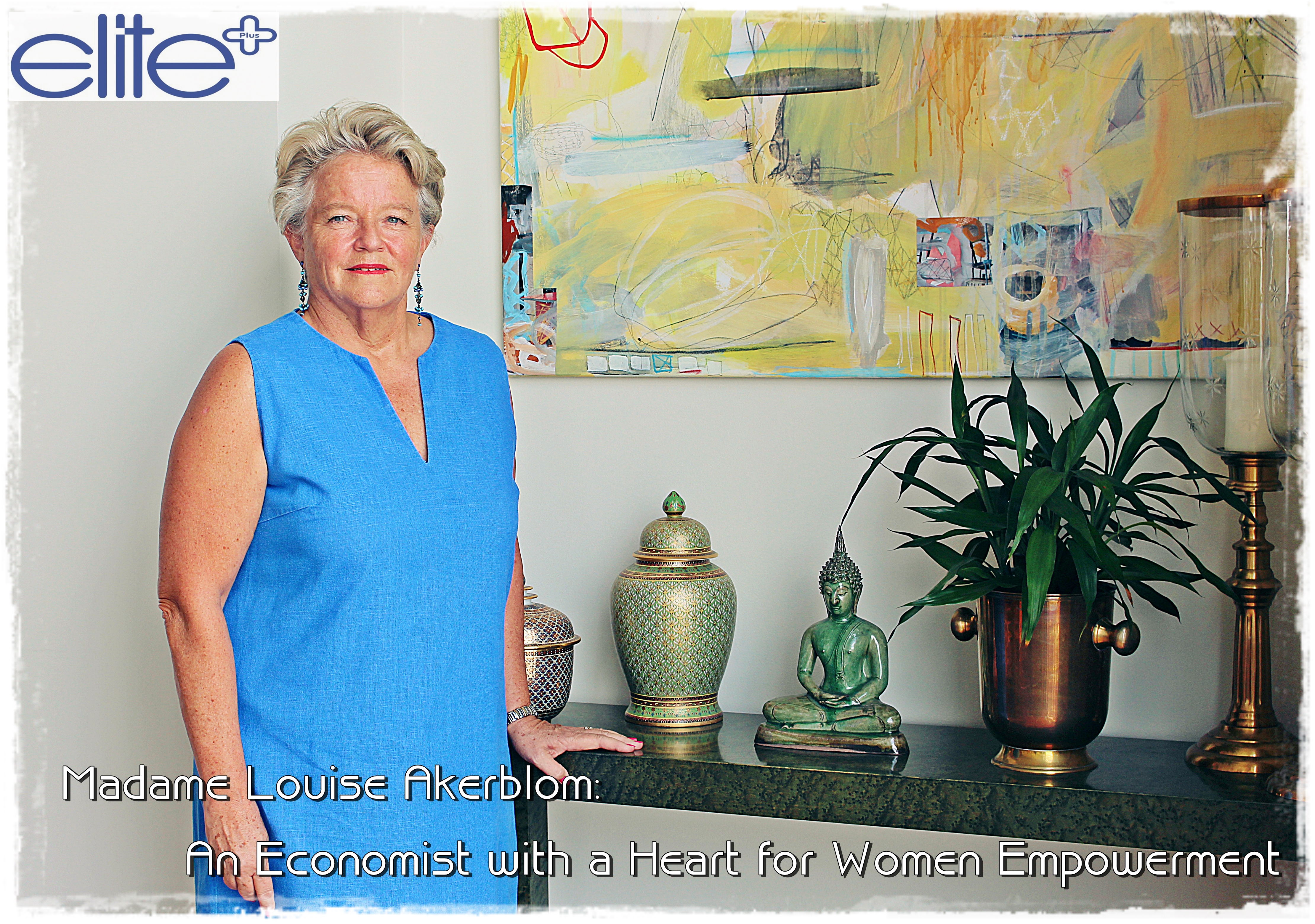 Madame Louise Åkerblom arrived in Bangkok in 2019 with her husband, HE Jean-Paul Senninger, ambassador of the Grand Duchy of Luxembourg to the Kingdom of Thailand. At their elegant high-rise residence overlooking the bustling business district of Bangkok, Elite+ sat down with Madame Louise to discuss her vast experience as a working mother and professional who has focused on women empowerment tirelessly throughout the years. Born in Sweden, Madame Louise had her first extended expatriate experience in 1973, at the young age of 15, working as an au-pair in the United States. She then returned to Europe and studied French in Geneva, graduating from high school in 1977 and next working as a “gouvernante”. As a skilled linguist, she speaks Swedish, Luxemburgish, English, French, German and Spanish. In 1982, Madame Louise earned her undergraduate diploma in International Economics at the University of Uppsala in Sweden. As a trailblazer when master’s degrees were still uncommon, in 1984, Madame Louise received a scholarship for postgraduate studies in European Integration at the College of Europe in Bruges, Belgium where she met Ambassador Jean-Paul. After a year working in the automotive industry in Sweden, she permanently emigrated to Luxembourg in 1985. Madame Louise recalled, “I have enjoyed my working life. I remember that at a young age, I wanted to go abroad. Both my mother and grandmother worked and taught me to be independent. I was very fortunate to be offered the scholarship for my master’s degree and, thus, not be burdened with the need to pay back a student loan.” After settling in Sweden, with her economics background, Madame Louise worked with corporate clients dealing with foreign exchange trading and currency analysis in Swedish banks. When asked about her work experience, she proudly states, “I am very pleased of the 11 years (1993-2004) I spent with Initiativ Rem Schaffen in Luxembourg. I was the general manager of this non-profit organization that in those days focused on women only, but today, we assist all genders. We support and coach long-time unemployed, mainly “professional returnees” who need new vocational training and to update their skills. In Luxembourg, many women stop work to care for their family and then return to work once their children have grown up and they miss the challenge. Coaching and mentoring are an important part of our success rate. We started off as a small organization with one office in Luxembourg and have now expanded to comprise three branches with additional staff. Currently, I still serve on the board.” Madame Louise went on to say, “In Luxembourg, as probably in many parts of the world, women tend to give up on their careers to start a young family. After a few years of absence from job market, it can be very difficult to return to the workforce. This was especially true for women who took a career break in the 1980’s and then struggled to return to the office in the 1990’s without computer and IT training. Another common issue is that women tend to earn only about 80% of what a man is paid for the same position.” Dedicated to women empowerment, Madame Louise candidly shared a personal story. “In the1980’s, few schools in Luxembourg had canteens. They would close at noon, and children were expected to return home for lunch. This posed a problem for working mothers. To take a stand on this issue, a group of us enrolled our children in another school that offered lunch. Finally, in 1994, we successfully petitioned with other parents to force schools to offer canteen service.”

Madame Louise elaborated further, “I strongly believe that in Luxembourg as in many EU countries, women are very fortunate to have the resources available to them. It is our choice to take charge of our own lives instead of playing victim. We are working on a project in Luxembourg to facilitate diplomatic spouses to continue their own career. It is important not to lose sight of the fact they can pick up on their career after returning from postings abroad. This also means they can continue to contribute to their pension funds so they are independent upon retirement.” During eight years following her husband as a diplomat’s spouse between 2004-2012, Madame Louise spent time in Madrid, Spain and Washington, DC. She volunteered in public outreach programs, various women’s organizations, public schools and local organizations as well as served as a liaison with “Luxemburgers in America”. Prior to moving to Thailand, at home, she worked with the Luxembourg Chamber of Commerce to handle economic missions for two years before joining the Ministère des Affaires Etrangers et Europeens, representing Luxembourg as Vice Chair of the International Preparatory Committee charged by 25 countries to set up the Unified Patent Court.

On the subject of charity work, Madame Louise explained, “I prefer to work with smaller organizations that need more support than larger charities that have greater access to resources. In Thailand, our embassy works closely with “Friends of Thai Daughters” in Chiang Mai, which provides a safe place to stay for vulnerable girls. Many have managed to complete their studies while residing there. Another important project for us is Dr Cynthia’s Mae Tao Clinic in Mae Sot, a community-based organization providing support to the local population and many refugees.

“I would like to add that I am a member of Zonta International and a founding member of a Zonta club in Luxembourg. I also assisted in founding the first Zonta chapter in Madrid and have continued my membership in the Luxembourg chapter. Unfortunately, with the Covid-19 situation around the world, we are sadly seeing an increase in domestic violence globally.” Elite+ asked Madame Louise what she enjoys most during her free time, and she answered, “Growing up in Sweden, I loved sailing and attended a naval training course at a young age and served as an officer on a training ship. Unfortunately, as Luxembourg is a landlocked country, I have not been able to pursue this hobby. Snow and skiing I’ve always loved and have passed on to my children on annual trips together.”

Touching on her views of Thailand after residing here for almost three years, Madame Louise said, “I visited Thailand and spent time in Phuket as a tourist in 1998. Both the Ambassador and I were very excited upon learning about his assignment to Thailand. As the ‘Land of Smiles’, I feel the country is beautiful and Thais are very hospitable. Apart from Thailand, Ambassador Jean-Paul is responsible for Indonesia, Malaysia, Myanmar, Singapore, Laos and Vietnam. In contrast to Thailand, Luxembourg is a small country. Our population has more than doubled since 1985 from 300,000 to currently 700,000 inhabitants, in a large part through immigration, and we are proud of our integrated society.”

“During the past three years, we have been able to explore Thailand. We have travelled to the north, visiting Mae Hong Son, Pai, Chiang Rai, Chiang Mai and Sukhothai while down south, we have gone to Krabi and went sailing in Phuket.. However, while staying in Thailand, I have missed the seasons in Luxembourg.” For the past two years, Madame Louise has participated in the annual “Thai Silk Road to the World” exhibition. Due to Covid-19 restrictions on international travel this past year, Thai design students from vocational colleges were assigned to work with the embassy, which she described as a ‘quite meaningful project’.

As our interview drew to a close, Madame Louise concluded, “For the past year, the Covid-19 restrictions and lockdowns have limited our social connections. I am looking forward to having more opportunities to meet Thai people from all walks of life. The Thai language is something I also hope to master someday.”