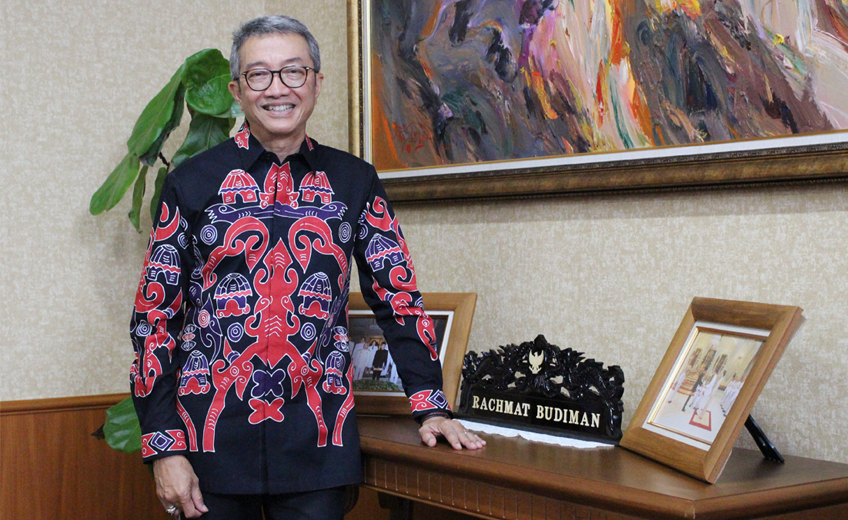 Indonesia and Thailand bilateral relations have spanned over 71 years since diplomatic relations between the two countries were officially established in 1950. HE Rachmat Budiman, ambassador of Indonesia to Thailand, recently sat down with Elite+ to discuss the expansive business, trade and cultural relations that have evolved over the years.

Ambassador Rachmat Budiman arrived in Thailand in December 2020 to assume his post after his already highly-impressive diplomatic career since 1986. His Excellency has served at the embassies of Indonesia in The Netherlands, Australia and Austria as well as at their mission to the United Nations in New York. Before Thailand, he was Indonesian Ambassador to Austria and Slovenia and concurrently Permanent Representative to UNODC, UNIDO, CTBTO, IAEA, OFID and IACA. At present, Ambassador Budiman is also serving as the Indonesian Permanent Representative to UNESCAP.

To begin, could you give us some background of the diplomatic relations between Indonesia and Thailand?

The relations between Indonesia and Thailand date back centuries through trade, religious contacts and exchange of cultural missions. Our relations were even further cemented by visits of King Chulalongkorn in 1871, 1896 and 1901 and King Prajadhipok in 1929 to Java. The late King Bhumibol Adulyadej and HM the Queen Mother Sirikit together visited Indonesia in 1960 as has HM King Maha Vajiralongkorn in 1986 when he was Crown Prince. Last year, Indonesia and Thailand celebrated our 70th Anniversary of Diplomatic Relations. Could you next explain your responsibilities as the Indonesia’s Head of Mission/Permanent Representative to UNESCAP?

My primary responsibility as the permanent representative to UNESCAP, or the United Nations Economic and Social Commission for Asia and the Pacific, is to serve as a connection between Indonesia UNESCAP and its related agencies. My duties also entail promoting Indonesian interests in international organizations, actively engaging in the decision-making processes of these organizations and providing information to the Indonesian Ministry of Foreign Affairs on the operations of these organizations.

Now, could you tell us about trade between Indonesia and Thailand as well as ASEAN?

Thailand is one of Indonesia’s major trading partners, and Indonesia is Thailand’s third-largest trading partner in ASEAN, after Malaysia and Singapore. Our trade relations have grown over the years. Before the pandemic, bilateral trade was quite positive. In 2019, total trade amounted to USD15.6 billion. Last year, like most countries, disruption to trade caused by the pandemic decreased our trade between Thailand by around 26%, registering USD11.5 billion. Trade between our two countries as of September 2021 has reached USD11.8 billion, already surpassing the 2020 total.

Indonesia’s exports to Thailand comprise around 35% in fuel lubricants, 35% raw materials and intermediate goods such as agriculture and fisheries products and the the remainder are consumer goods, automotive parts and capital goods respectively. For many years, we have had a trade deficit, but I expect in the future, trade between both countries will become more balanced. Indonesia is committed to enhance cooperation with Thailand to capitalize on trade commitments in a bilateral context as well as regional trade agreements such as in ASEAN, ASEAN+1 FTA and the Regional Comprehensive Economic Partnership (RCEP).

What advice would you give Thai entrepreneurs interested in investing in Indonesia or trading with Indonesian companies?

Indonesia is a great investment location with vital natural resources, a young and highly qualified workforce and a huge and growing domestic market, all of which are complemented by an improving investment climate and more extensive worldwide profile. Indonesia’s immense economic potential is prepared for take-off, with now 17 years of political, democratic stability.

The country’s investment climate focuses on Indonesia’s economic resiliency during and after the global financial crisis. For Thai entrepreneurs interested in investing or trading with Indonesian companies, I would suggest they contact the Embassy of the Republic of Indonesia. We can provide information on the rules and regulations on how to best do business in Indonesia as well as potential business partners and projects which could be of interest.

How big would you say the Indonesian community is in Thailand, and what businesses as well as activities are they involved in?

I would say that our community here is not as big as our communities in Malaysia and Singapore. Yet, it is big enough compared to the Indonesian communities in other ASEAN member countries such as Vietnam, Cambodia and Laos. Currently, there are approximately 2,000 Indonesians living in Thailand. Most are students or professionals working in international organizations or private companies. A small percentage are married to Thais.

The Covid-19 pandemic has had a profound effect on virtually all countries. I have seen in the news that Indonesia, like Thailand, appears to be bringing this pandemic under control. What would you attribute this to?

Indonesia has successfully been able to manage and control the spread of Covid-19 cases as shown by the steady decline of new cases and deaths during the past few months, starting in September. After a high spike in June-July this year to more than 40,000 cases daily, Covid cases have now dropped to between 300 to 500 cases per-day. As of November 2021, the number of active cases in Indonesia was around 9,000, which is quite low when compared to our population of 270 million.

The success of the Indonesian government in controlling the Covid-19 pandemic can be attributed to two important factors, namely, the implementation of a pandemic control policy, or large-scale restriction policy (PSBB), and our vaccination program. PSBB is a restrictive form of lockdown whereby non-essential and non-critical commercial activities are not allowed.  The Government started our national inoculation program in early January 2021 with the aim to get 208 million Indonesians vaccinated, 70% of our population, by the end of 2021. As of November 2021, 130.3 million, or 62.64% of the population had received their first jab, while 84.2 million, 40.48% had received their second dose. When you arrived in Bangkok, we were under a very strict lockdown. How difficult was it for you to assume your duties as ambassador and permanent representative? What adjustments did you and the embassy need to make?

I arrived in Bangkok in late December 2020 when Thailand was hit by its second wave of the Covid-19 pandemic followed by the third wave beginning in April. Before my arrival here, I had mapped out many programs and activities to be conducted, but the situation required us to make adjustments. We had to implement a 100% work from home policy. Another adjustment was that many of our programs had to be conducted virtually such as meetings with our community and counterparts here as well as our capital. I also chaired some UNESCAP meetings that were held online. Some activities such as Indonesian cultural promotions and seminars were also conducted virtually.

Now that Thailand has once again been able to lift restrictions, what type of cultural and investment promotional activities are you organizing?

The Indonesian Embassy organized a business forum on Unlocking Opportunities in Logistics to Support Trade and Investment on 9 November 2021. We are also planning to host the Indonesian Festival/Indonesian Day to further promote our art and culture. This is an activity we jointly organise with universities across Thailand. We not only showcase Indonesian traditional music and dance, but we also provide workshops so participants can directly experience our dance and music.

The Indonesian Embassy will organize a Trade, Tourism, Investment and Cultural Forum next year in September 2022. This forum aims to promote opportunities in these areas to different stakeholders in Thailand and the international community.

I had visited Thailand frequently before my posting as Indonesia’s ambassador. Other than its culture, what has impressed me most are its friendly people, beautiful landscape and delicious cuisine. In terms of culture, actually, Indonesia and Thailand share many similarities. We also have similar traditional ceremonies, particularly during harvest season when neighbours express their kindness by helping their neighbours in need. As far as food, almost all of the fruits and vegetables grown in Thailand can be found in Indonesia as well. Have you been able to travel much around the Kingdom and region? If so, what have been your impressions and where would you like to visit and what kind of activities would you now like to attend?

Unfortunately, as I arrived in Thailand during the second Covid-19 wave, my travels were very limited. However, after the recent relaxation in restrictions, I have been able to visit some provinces and cities such as Chiang Mai, Kanchanaburi, Krabi, Phuket, Surat Thani, Yala, Satun, Songkhla and others. Those visits were formal as the new Indonesian ambassador to Thailand I needed to pay a courtesy call to governors and related stakeholders to discuss issues of mutual interest to strengthen cooperation between our two countries.  My impression during these visits was that Thailand offers so many beautiful, natural landscapes and historical sites and, more importantly, its warm hospitality. Each Thai province also has unique characteristics and potentials that should be further explored.

The ongoing Covid-19 pandemic poses an unprecedented challenge for all countries, including Indonesia and Thailand. In this difficult time, as the newly-appointed Indonesian Ambassador to the Kingdom of Thailand, I am greatly honoured to be part of the endeavours to further strengthen mutually beneficial relations between Indonesia and Thailand that will enable our two countries not only to bounce back better in all walks of life, but also prepare for new challenges in the future.

I wish to convey my highest appreciation and gratitude to the Government, private sectors, and related stakeholders for the strong support in promoting and enhancing relations and cooperation between Indonesia and Thailand. With the continued support and close partnership, I am fully confident to be able to carry out this duty successfully.