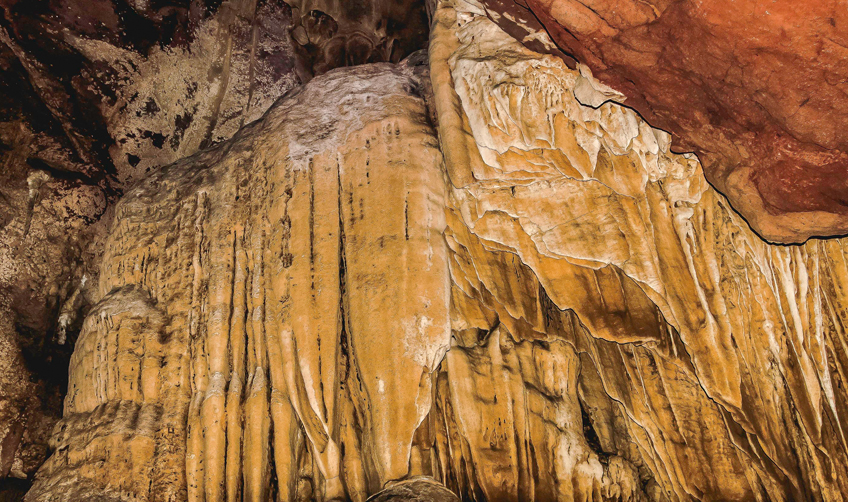 The third cave in Pang Ma Pha District in Mae Hong Son Province I’d like to share my adventure with you is Tham Pha Daeng or Cave Red Cliff located in Tham Plah-Namtok Pha Sua National Park.  It’s a through cave with a small stream running along its total length of 1,323 meters from the upstream entrance to the resurgence entrance.  To reach the cave entrance one must trek 430 meters up a mountain.

When I went to the park office to obtain permission to enter the cave and to request for a ranger to guide me, Khun Kiattisak, the park chief who coincidentally planned to explore Tham Pha Daeng on the same day, asked me to join him and his small group of rangers.  So I was fortunate to have the best company one could ask for in exploring this cave in the wilderness about one hour drive from the park office.

We entered the large cave entrance and followed the shallow stream planning to exit the cave at the resurgence or downstream entrance.  After five minutes I had my first excitement when a ranger led us to a section of the cave wall and showed us cave worm threads which I had never seen before.  What I was witnessing through our headlights were many sticky silk threads of 30 to 40 cm long hung from the cave ceiling by larvae of cave flies to catch prey consisting of mosquitos, moths, and other species of flies.  I learned later on with regret that the larvae were sensitive to light and disturbance. They would retreat to their nests and their bodies would stop glowing.

Nearby we spotted another living resident of the cave.  It was a green odorous frog or a copper-cheeked frog found in Southeast Asian countries and also in China and India.  The natural habitats of this frog species are moist tropical areas which include water caves such as Tham Pha Daeng where we discovered it clinging on the cave wall above the stream.  A male green odorous frog has a 41-55 mm body-length while a female is about twice as big measuring 80-100 mm.  We also sighted a few fish and shrimps in the clear stream.

As we advanced further, the cave became wider and with higher ceiling while the surrounding walls were adorned with flowstone cascades coming down from the ceiling to the cave floor.  I was fascinated by two groups of flowstone, each of which showed different colors of minerals, white calcite and golden-brown iron oxide, covering the flowstone.  Several million years ago before these two groups of flowstone were formed, both of them must have been spectacular waterfalls inside the cave. Another huge flowstone cascade close by caught my attention.  It comprised flowstone of different sizes rolling down on top one another from the ceiling to the floor.  A few steps away I was captivated by the sight of a magnificent flowstone with long streaks falling straight down to the floor.  Again this flowstone must have been another beautiful waterfall in the past before all the water evaporated away turning it into a dry, solid flowstone we were seeing to day.

In most limestone caves there are six kinds of speleothems which are usually sighted - stalactites, stalagmites, columns, soda straws, flowstone, and draperies.  So far we had seen only flowstone in different colors, sizes, and settings.  As we trekked further, we began to see the other kinds of speleothems, notably a special kind of draperies called bacon draperies which are not often spotted.  As I was photographing a large flowstone, next to it hanging straight down from an inclined ceiling were thin sheets of draperies which looked like strips of bacon.  They were indeed the rare bacon draperies!

Less than ten paces away I stared at an extraordinary sight of a large flowstone with streaks hanging down halfway to the floor.  Underneath it were countless numbers of small stalactites in the forms of soda straws.  Looking closely at the tips of those soda straws, I saw drops of water dripping down at interval from them indicating that the straws were ‘alive’ and would continue to create stalagmites on the cave floor.

Khun Kiattisak, standing a few steps away, shone his flashlight at the ceiling nearby and said, “Look at those soda straws!”.  I directed my headlight at a clump of soda straws half a foot to one foot long hanging down from the ceiling, then stared at the cave floor directly underneath.  I remarked, “I’m surprised not seeing any stalagmite on the floor!” “Where we’re standing is low ground and is flooded during the rainy season annually,” explained the park chief. “The high current would wash away any newborn stalagmite.”

We continued on a bank of the stream for a short while until we reached a spot where we saw a huge stalactite in the process of joining the floor.  When it succeeded a new column would be born and could withstand strong current during the rainy season.

We then approached a section of the cave where the floor was covered with mud.  A large curtain of stalactites hung down about two meters above the muddy floor.  In the background stood a few large sturdy columns. We casted our eyes ahead and stared in amazement at a wide solid wall of stalactites in golden brown color mixed with those covered with mud dropping straight down almost touching the cave floor.  We went to have a closer look at those stalactites and discovered that many of them resembled breast-shaped stalactites I sighted in Tham Lod (Elite Plus # 45).

Kiattisak commented that the heavy rains must have turned the soil above the cave into mud which seeped through several cracks in the cave ceiling and covered the speleothems in the section we were now.  Overhearing our conversation, a ranger told us to follow him to a large nearby boulder and pointed at its relatively flat surface.  He said, “Mud stalagmites!”  He then explained that these small stalagmites were in the early stage of stalagmite formation and were covered by mud.  The boulder was a part of the ceiling which collapsed long time ago and had become a base for stalagmite formation.  These young stalagmites growing on this high boulder were able to survive the flood which could not reach them and sweep them away. The path ahead became a narrow corridor both sides of which were lined with stalactites covered with mud until we reached a low tunnel.  A ranger who had been through this corridor before told us we had to crawl on knees for five meters to reach a large room.  He then led us crawling through that tunnel on the dry floor and emerged into a spacious room at the other side.  We scanned around and what looked like a work of art on a wall caught our attention.  We went closer and stared in fascination at a figure resembling a large sea fan under the sea.  I brought back a few images of this extraordinary figure to search for more information.

I learned from my research later on that the figure was a fugal mycelium which is a vegetative part of a fungus-like bacterial colony found in the subterranean environments such as caves with total darkness, relatively low temperatures, and scarce organic matter.  I found a study in 2020 on diverse subterranean fungi of an underground iron ore mine which stated that there was little understanding and knowledge on fungi that inhibited such subterranean environments.

Let’s return to our exploration of Tham Pha Daeng.  We crossed the room to approach the path which would lead to the resurgence entrance about twenty meters away.   However, to our dismay the narrow path was completely blocked off by the enormous volume of wood debris cemented by mud.  It was impossible with our limited manpower and insufficient tools to open up the path.  We then decided to retreat and trekked back to the upstream entrance we came in.

That ends the account of my adventure in the exploration of Tham Pha Daeng.

My next adventure would be in Pha Hom PoK National Park in northern Chiang Mai bordering Myanmar in search of the rare and endangered Mrs. Hume’s Pheasant and migrating birds from China and India.  See you in the next issue of Elite Plus.