From Good Health by Yourself to ‘Health Town’ 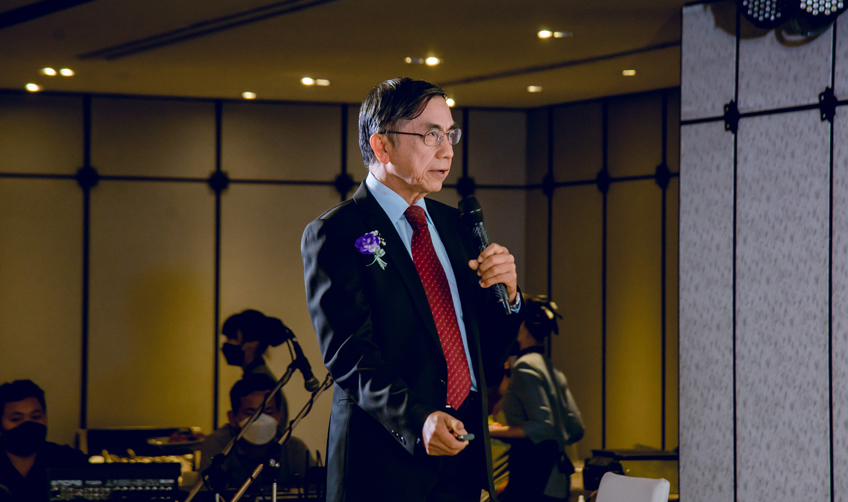 “From Good Health by Yourself to ‘Health Town’”,

A Journey to Sustainable Health and Peace

This article is based on the keynote address of Dr Sant Chaiyodsilp, MD, Chief Wellness Officer and Director, Wellness We Care Center, presented at the gala dinner to celebrate the 8th anniversary of Elite+ magazine and 60th anniversary of Praphansarn Publishing.

A heart surgeon who dramatically changed his life at the age of 55 when he began to suffer from ischemic heart disease and feared for his life, Dr Sant first conducted extensive research after rejecting the standard treatment of either balloon angioplasty or bypass surgery.

The first study was conducted by Dr Essie, a surgeon at the Cliff Land Clinic, one of the world's most prestigious hospitals for treating heart disease. He conducted research in which 24 patients with debilitated coronary artery disease were tested after beginning a low-fat vegetarian diet. They were then followed up for 12 years, with evidence of changes such as periodic cardiac catheterization and PET scan studies. The outcomes for this group of patients improved dramatically. The incidence of acute myocardial infarction was reduced to zero.

The second study, done by Dr Dean Ornish, comprised a sample of nearly one hundred people with coronary artery disease randomly divided into two groups. One group lived a normal life while the other totally changed to a plant-based, whole food, low-fat diet, regularly exercised, practiced yoga, mediation or tai chi and regularly attended a peer support group. After one year, it was found that the group who changed their lifestyle saw their coronary arteries become wider and their rate of chest pain decrease by 91% while the group, who carried on with their conventional lifestyle, had narrower blood vessels and their rate of chest pain increased by 165%.

After changing his diet and beginning to exercise, Dr Sant no longer felt chest pain and was able to stop taking antihypertensive and anti-cholesterol medication as his blood pressure and cholesterol levels dropped below those he had while taking his medicine. After this, he quit working as a cardiac surgeon and opened the Wellness We Care Center in Muak Let, a couple of hours north of Bangkok, where he began to teach lifestyle modification and following a plant-based diet.

Dr Sant then entered the world of lifestyle medicine and began to travel to meet other physicians and lay persons promoting this path. One of the men he met was Dan  Butner, a National Geography photographer who while in search of the oldest people anywhere, developed a practical index on the ratio of centenarians in communities around the world. At the end, he selected five communities, he called “Blue Zones” where people lived the longest: Barbagia, Sardinia, Italy, Ikaria, Greece, Cape Nicoya, Costa Rica, Okinawa, Japan and a Seventh Day Adventist community in Loma, Linda, California, USA. Their common factors included eating a moderate, mainly a plant-based diet; moderate alcohol consumption; moving a lot and walking throughout the day; living a fulfilling life, what the Japanese call “ikigai”; being spiritual; finding ways to release stress and having a tight family connection and community culture.

Based on these findings, a number of communities have now adopted the Blue Zone concept to make their homes and lifestyles healthier as part of the “Blue Zone Project”, which has as it slogan, “Make healthy choices to be an easy choice.” As 90% of the time people spend their lives within a 30-km radius, they begin by making their communities safer with healthy food available everywhere. There are many walkways and lots of natural sites to be enjoyed. They promote spirituality and a close-knit community.

Currently, there are 25 communities in the US that have become Blue Zone towns, Boulder, Colorado ranked at the top. Dr Sant is now attempting to make Muak Lek Valley where he lives the first Blue Zone community in Thailand. All is now in the primary stage, but visitors are welcome to come and experience this wholistic, life-altering lifestyle practiced there.