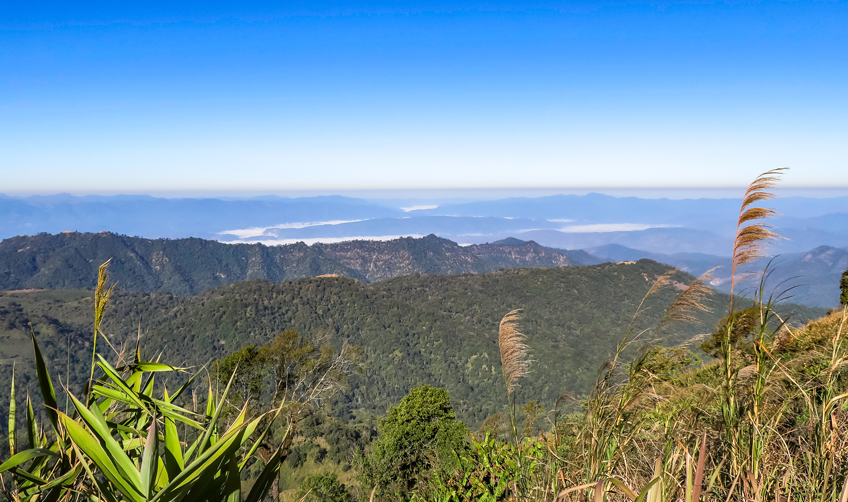 As a birder living in Chiang Mai, I’ve always been interested in exploring top birding locations in the province.  I learned from a fellow birder that Doi Pha Hom Pok National Park, the northernmost national park in Thailand bordering Myanmar, is the habitat of several rare resident birds and a favourite destination for migrating birds from China and the Indian subcontinent during winter.  The most popular birding spot in Doi Pha Hom Pok at the moment is Doi Sunju, located about 1,250 metres above sea level.  It’s where one can find those birds which prefer a temperate climate at 1,000 to 2,500 metres sbove sea level and are rarely spotted anywhere else in the country. The most distinctive bird which has attracted birders, local and foreign, to Doi Sunju is Mrs Hume’s pheasant, also known as the bar-tailed pheasant.  I saw my friend’s photographs of this pheasant and immediately decided to go to Doi Pha Hom Pok in search of Mrs Hume’s pheasant and other rare resident birds as well as migrating birds that can only be found at this high-altitude area.

In the first week of January, I embarked by car, driving two and a half hours from my home in Doi Saket on the outskirts of Chiang Mai city to Fang district where Doi Pha Hom Pok National Park is located.  I reached the lush green premises of the park headquarters and checked in at a comfortable bungalow.  Upon my request for a birdwatching guide, the park kindly assigned a female ranger named Aom, an experienced birder, and a four-wheel-drive vehicle with a driver named Seri to take me around Doi Sunju and adjacent areas to pursue my quest. By the way, “Doi” is a Thai word for Mount.

We left after lunch, driving up the mountain range to reach the top of Doi Sunju at the altitude of 1,250 metres and then continues on a single road on Thai soil that marked the border between Thailand and Myanmar.  We stopped at a spot overlooking a valley which belonged to Myanmar.  The road we were on was constructed for a defensive purpose, allowing the Thai army to patrol this sensitive area.  The now peaceful situation on Doi Sunju in recent years has turned this mountain top into a popular birdwatching spot.

Learning of the first priority on my birdwatching list, Aom told me that Mrs Hume’s pheasant usually came out from the forest to forage on this road at daybreak.  Tomorrow we had to leave the park office at five-thirty to reach this spot before daybreak and wait for the pheasants to appear.  It was reported that yesterday a group of birders sighted two male and four female Mrs Hume’s pheasants on this road.  So there was a very good chance that we might see them tomorrow morning.  Aom mentioned that the Mrs Hume’s pheasant is a rare species and considered endangered in Thailand because they are hunted for food by villagers, although the IUCN has classified them as near threatened.

While we were here and there was still plenty of sunlight, we looked for some resident and migrating birds which frequented the area.  Aom suggested that we would do better on foot while Seri followed far behind in the car.  Aom’s suggestion worked.  In less than five minutes, Aom pointed out a middle-sized bird with colourful plumage jumping from rock-to-rock foraging near the road.  “It’s a Silver-eared Laughingthrush,” said Aom and explained that it was a resident bird often spotted at an altitude between 1,065 to 2,565 metres.  “It was formerly a subspecies of the Chestnut-crowned Laughingthrush found on the Indian subcontinent,” added Aom. “Being its own species, it’s habitat is in southern Yunnan, Vietnam, Laos, Myanmar and Thailand.”

Not too far from that spot, Aom excitedly pointed at a small blue-headed bird on a branch of a roadside tree.  “That’s a rare one!” She exclaimed. “It’s Blue-fronted Redstart that has migrated from either China or the Indian subcontinent.  It’s a male.”  She continued, “Let’s look around for a female.  Should be one nearby.”  Aom then pointed at a bird the same size as the male Blue-fronted Redstart but with brownish-grey plumage and said, “That’s the female!”

Further up the road, we sighted another rare, migrating species called Slaty-blue Flycatcher, a small bird of 12.5-13cm in size, on a rock near the road.  It breeds in the Indian subcontinent and winters in Southeast Asian countries. We called it a day and returned to the park headquarters.  The next morning, we left at five-thirty with Seri driving us up to Doi Sunju and stopped at a spot where Mrs Hume’s pheasants have been frequently spotted.  Aom told me to stay in the car which would serve as our hide.  If we moved around on the ground and were seen by the pheasants, they would immediately flee into the woods and might not return until late in the morning.

We sat patiently until daybreak and another ten minutes passed by.  Then, to my delight, two male Mrs Hume’s pheasants slowly emerged from the woods and began foraging on the grass by the road.  I carefully lifted my camera and quietly photographed the two pheasants which now moved to the middle of the road.  A few minutes later four female Mrs Hume’s pheasants approached the road from the other side and joined the males to forage.  The two males began to confront each other and act belligerently as if to skirmish over a female.  Then, one male decided to retreat and returned to foraging, allowing his fellow suitor stand beside a female.

As we were watching the pheasants, a small bird of 15cm in size flew from the woods and landed on the road searching for grass and weed seeds.  Aom said it was an Olive-backed Pipit, a long-distance winter migrant that flies from India to Southeast Asia.  I asked whether it was a male or female.  The reply was that both sexes looked alike.

We continued on the border road passing an army outpost as we headed in the direction of Doi Lang about 45kl away, looking for birds.  Seri stopped the car near a roadside tree on which a small bird was spotted.  Aom said, “A male Grey Bushchat, which could be either a resident bird or migrant.”  “Is there a female around? Are they alike?” I asked.  Aom looked around and then replied, “A female’s on the ground. While the male has a dark blue head, the female’s head is dark brown.”

Seri made another stop and pointed at a large brown bird with a long, curved bill on a branch of a nearby tree.  “A Rusty-cheeked Scimitar-Babbler, a common resident of the park.  It’s found only in the north at 1,200 to 2,000 metres.”  I nodded in submission, realizing that all the birds I’d seen so far lived above an altitude of 1,000 metres.

We reached a Border Patrol Police checkpoint at Doi Lang and got out of the car to stretch our legs and look around.  Aom and Seri greeted two policemen whom they knew personally.  Aom came to me and asked, “Have you ever seen a spectacled barwing?”  I replied with a head shake.  Aom led me to a nearby shack where in front was a bamboo pole with a large piece of banana pierced at the top.  She pointed at a bird about 24cm in size with a white ring around its big black eyes and striking long tails and identifying barwings.  The bird had a small piece of banana in its beak.  This bird and a group of Dark-backed Sibia had been keeping these policemen company.

“Where are the Dark-backed Sibia?” I asked. “I’ve never seen them before.”

Aom pointed at a low branch of a large tree a few steps away where two small birds were eating a piece of papaya.  “Dark-backed Sibia,” said Aom. “There’s one more bird, a very rare one, to show you before we leave Doi Lang,” remarked Aom.  She led me to a large bush surrounded by bamboo with a long wooden bench situated about ten metres away from it.  We sat down on the bench, and I had my camera with a 100-400mm zoom lens attached.  I didn’t have to wait long until a tiny bird with a very short tail appeared at the bush opening.  I swiftly took three shots before the bird disappeared into the bush.  “That’s Chestnut-headed Tesia, a rare local resident of the north.  Its body length is only 8.5-9.5cm.”

The next day, I departed Doi Pha Hom Pok National Park with the intention of returning this coming winter for a longer stay to enjoy more birdwatching at Doi Sanju and Doi Lang.