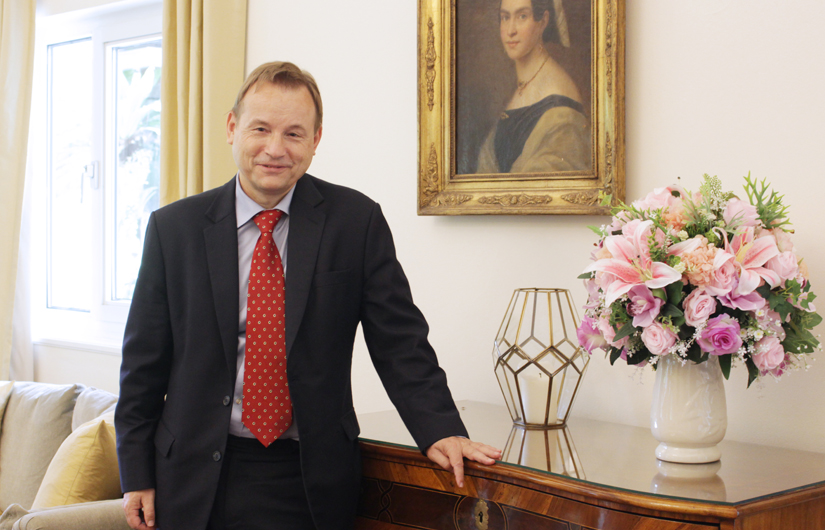 HE Georg Schmidt, Germany’s ambassador to Thailand, arrived in Bangkok in 2018. He was born in Freiburg, a medium-sized town in the south of Germany close to France, home to one of the country’s oldest universities. Ambassador Schmidt showed a strong interest in Asia and its culture early in his life. A fluent Mandarin speaker, he has followed China since the 1980s. A graduate of the University of Hong Kong in 1990, he majored in History and Economics and paid for his studies by translating and teaching German. At that time, the number of Europeans studying in Hong Kong was quite low. In 1995, Ambassador Schmidt joined the German Foreign Service. During eight years in the President’s Office, he served three different German Heads of State, advising them in Asian and African affairs. His overseas postings have included Japan, Mali and Sri Lanka while in between postings, he travelled frequently to Asia and Africa. Germany is an important partner to Thailand. Ambassador Schmidt explained, “A treaty was signed in 1862 between the then Kingdom of Siam and a group of German states (Germany as a country was not yet founded). That year is considered the kick-off date of government to government relations. This treaty is the founding document of our diplomatic relations. The motto for this year’s anniversary celebration is “Partners for Sustainable Development” during which we want to celebrate the numerous interactions between Thais and Germans in all walks of life”.

Due to the pandemic, Ambassador Schmidt admitted organizing activities to celebrate this milestone has been difficult. “We started planning in 2021, when Thailand experienced a prolonged lockdown. We had to be flexible and creative, organising online events and smaller activities with many partners. A few highlights that I would like to share include students from Silpakorn University redecorating our embassy wall, developing a German-Thai Friendship Trail in Khao Yai National Park, a River City exhibition and publishing a new book, Berlin Bangkok, which covers German vestiges in Bangkok and Thai evidence in Berlin. More information about this can be found at #160 Thai German Activities.”

According to Ambassador Schmidt, “Germany is Thailand’s most important trading partner in the European Union. In 2021, we exported goods and services valued at 4.9 billion Baht to Thailand while Germany’s imports were valued at 6.9 billion Baht. Germany exports machinery, chemicals, electronics and automobiles and parts to Thailand while Thai exports to Germany include smaller electronics, Thai food and processed products and textiles. Bilateral trade has revitalised very quickly since the pandemic, which is encouraging. We see lots of promise as well if Thailand can diversify further.

German companies are at the forefront of the high-tech industry, and Germany is extremely advanced in terms of technological development. I hear a lot of generalisations about a declining Europe, but just look at German technology today and see for yourself.  Facing the challenge of climate change, we are now seeing increased technological and knowledge transfer from Germany to Thailand.”

Ambassador Schmidt proudly shared, “We were the first EU country to donate vaccines to Thailand. We donated a lot of medical supplies and mobilized our resources at the time Thailand was in need of this equipment. This underlines the strong relationship between our two countries.”

When asked for advice for Thai entrepreneurs who may be interested in trading with Germany, Ambassador Schmidt said, “They should look for German partners and do their research properly. We also tell German companies interested in doing business in Thailand to find Thai partners.  Here, we have a very strong German-Thai Chamber of Commerce with both German and Thai board members. Over 600 German companies are active in Thailand, employing some 200,000 people. Some German companies have a long, established history in Thailand such as B Grimm Group. Germany has an open economy and we welcome investment. The Thai Central Group holds 51% of the KaDeWe-Group, which also owns the department stores Alsterhaus in Hamburg and Oberpollinger in Munich.”

Ambassador Schmidt further elaborated, “We often advise German entrepreneurs to consult existing German companies here, as they can provide the best testimonials for doing business in Thailand.  One good example during the pandemic is how the German government supported Lufthansa. As soon as travel began to revive, Lufthansa made sure that they repaid the government quickly to regain their independence. It should be remembered that the German government does not play such a strong role in business..”

The Covid-19 pandemic has restricted many regular trade and cultural activities between Germany and Thailand. “Both Germany and Thailand serve as hosts for many international trade fairs. During the trade seasons before, our embassy would be serving numerous trade missions coming to Thailand. Aside from trade, 160 years is not just about business; every year we host a German Language Competition where students from all over the country come to practise their German. For the past two years, this event was held online, and it was different from when students could be physically together to promote cultural exchange. We hope these activities can gradually come back.”

Ambassador Schmidt pointed out, “Apart from the challenge we face with the pandemic, there is the current global issue of the Russia-Ukraine war. It has overshadowed many activities. The war has implications for Thailand as well. We can see energy costs are rising. It is very difficult for the Thai government to maintain food prices as the Russians are blocking the Black Sea to prevent shipments. The war affects everyone, and we encourage people to understand that there cannot be ‘business as usual’ as long as this war continues.

“Geographically, we are closer to the war. Ukraine to Berlin is only a two-hour flight. Psychologically, we have thought we would not see another war like this. The European continent has faced many wars. The European Union is a project of peace; it is not just about economic integration, but political as well. The members’ destinies are inter-locked and we must compromise to survive. The EU has been about peace, and now this war has become a new reality for our younger generations. War has now come back with full vengeance. . People from one day to the next are losing their homes and livelihoods. Emotionally, it is very hard for Europeans to ignore this fact, and many have shown great compassion, opening their homes to welcome total strangers. It also brings back very bitter memories for the older Europeans who experienced war before.”

Ambassador Schmidt continued, “Putin said, “We have to de-Nazify Ukraine.” He is calling the Ukrainian leadership “Nazis”. Germany has thus become involved in a much stronger way as German history is being dragged into the argument. All the more ridiculous since President Zelenskyy is in fact a Jew from a family of holocaust survivors. It gets even more ridiculous. Recently, the Russian foreign minister even alluded that Hitler himself might have been partly Jewish.

“We are also feeling the economic impact, and our government has to do a lot of explaining on why we should support Ukraine. Putin’s war of aggression will not stop at Ukraine. The Ukrainians are paying with their lives to defend freedom, while we are only paying with money. If we look at German history with Russia, it has been difficult for us to take a tough stance. The German army caused terrible suffering to the former Soviet Union during the Second World War. This includes – among others – the territories of Russia and Ukraine. So we feel there is a historical responsibility towards Ukraine as well.

Since then, we have tried to build bridges with Russia, taking into account their hurt pride. Now, though, Russia has become quite aggressive towards its neighbours. The reality is that it is acting like a big bully towards its smaller neighbours.

“I was very happy that Thailand joined the vote to respect the territorial integrity of Ukraine, and the non-use of force.”

Ambassador Schmidt has spent nearly four years in Thailand and when asked what had impressed him, he said, “I have really enjoyed travelling outside Bangkok and seeing the beauty of the landscapes. However, what impresses me most is the diversity of Thailand. I see how many cultural influences have shaped the country and how so many different people have integrated so well here. Thailand has managed to accommodate Chinese, Muslim, Indian and European influences, picking and choosing and ultimately making something uniquely Thai out of it.  We have between 30,000 to 60,000 Germans living in Thailand. They must find the country very tolerant if they choose to set up their homes here.”

As our interview drew to a close, Ambassador Schmidt shared some final thoughts, “I am very impressed by the compassion shown by the Thai Red Cross and Thai people to the Ukrainians in their plight. I hope this is something that also links our countries as the Germans also feel strong compassion for those who suffer from the war in Ukraine.”