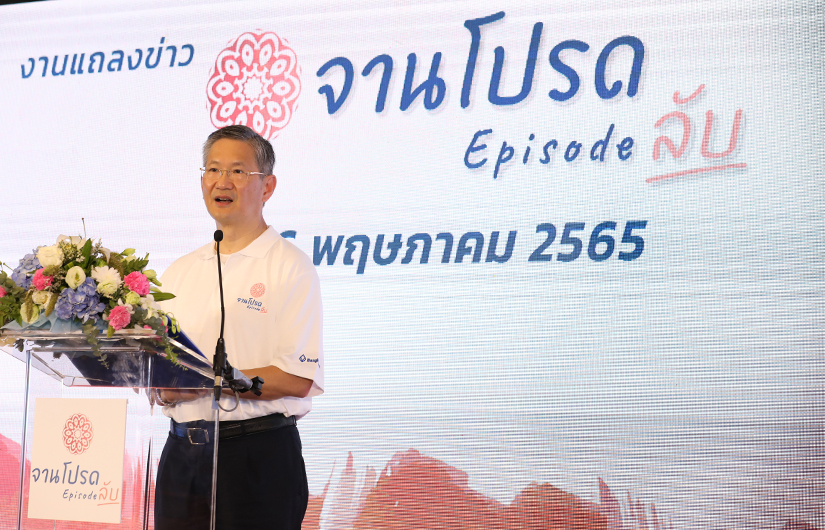 attract tourists to help restaurant owners to recover after Covid-19. Participants are invited

to create content in the “Favorite Dish, Secret Episode” and will have a chance to win

Bangkok Bank is organizing the “Favorite Dish, Secret Episode” project, inviting Thai people to create content to promote local restaurants. Total prizes for winner in this project are 400,000 baht. The winner from the project will be the first “Little Director” in Thailand. This project aims to offer support to stimulate grassroots economy, attract tourists and help restaurants to recover. Five well-known directors will join the activity to provide intensive training and share their experiences and techniques in making clips and short films.

Bangkok Bank Director and Senior Executive Vice President and Corporate Secretary Kobsak Pootrakool said the Bank organized the “Favorite Dish, Secret Episode” project inviting Thai people to create a short video clip under the theme of “Favorite Dish” to promote local dishes and restaurants in communities nationwide. This is one way to support the local economy and help SME operating restaurants and travel businesses to gain exposure and get more attention in a time of economic recovery after a two-year recession caused by the Covid-19 outbreak. This project invites students, university students and the general public to form a team of up to 5 persons to create a video clip to present the “Favorite Dish” from great restaurants in their provinces. Video clips can be made using a mobile phone or other devices with a length up to 3 minutes and can be sent to www.จานโปรด.com. The competition is divided into 2 categories: (1) students and university students (2) the general public. The 50 teams that are selected will join the “Little Director” course to learn about filming principles and hear experiences in creating short films from five well-known directors including Mr. Thanit Jitnukul, director of Bang Rajan, Mr. Prachya Pinkaew, director of Tom Yum Goong, Mr. Bandit Thongdee, director of Pumpuang, Mr. Rashane Limtrakul, director of Loke Tung Bai Hai Nai Khon Diew and Mr. Napat Tangsanga, a short film director who has won awards from many competitions.

“Story telling is an important way to add value to products and stimulate word of mouth. Thailand has more than 300,000 restaurants run by SME. Only some of them can create a story to promote their products, as their profession focuses on cooking. So, this project is one of the ways we can provide opportunities to customers and the new generation to help create stories on behalf of the restaurant owners and recommend their favorite dishes to others. Meanwhile, this project is an opportunity for those interested in making films, especially students and university students who like this type of work, as they can learn and gain experience from leading Thai directors. It’s a rare opportunity to learn directly from these five well-known directors,” said Mr. Kobsak. Mr. Thanit Jitnukul, representing the five film directors participating in this project, said he was excited to pass on his knowledge and experience to the new generation and those interested in film directing.

This is the first time that the “Little Director” award will be given in Thailand. He also believed that this project would help spark interest in film directing among a new generation. It will also provide a platform for students to showcase their talent and learn by doing. In addition, this project will offer an opportunity to help those who have a passion for film directing fulfill their dreams.

Mr. Thanit further said that: “Film directors need to be well-versed in a variety of topics. This intensive training course will provide the knowledge for the 50 finalists which covers thinking of new ideas, writing scripts that tell a character's story in a limited time as well as the preparation of the work from casting, location scouting and props, to the process of filming including the basics of photography, camera setup, using light and color to reflect the mood and tone of an image, camera movement, directing, image and lighting control, soundtrack, sound recording, and film editing. In addition, the course will also explain about the management of people, time and budget which is another role that the director needs to understand.”

“I think it's great that Bangkok Bank has come up with this project to help support restaurant owners in different communities. From my experience shooting movies in many places, I often came across restaurants that offer delicious food, some of which are small restaurant that many people don't know about, but they are well known among local people. Those who are interested in participating in the "Favorite Dish, Secret Episode” contest will have to make an introduction clip and pass on the story of your favorite dish to make the restaurants in your community more widely known. I believe that helping each other like this may seem like a small thing, but it will help our country move forward,” said Mr. Thanit.

Interested persons can check more details and conditions, at www.จานโปรด.com