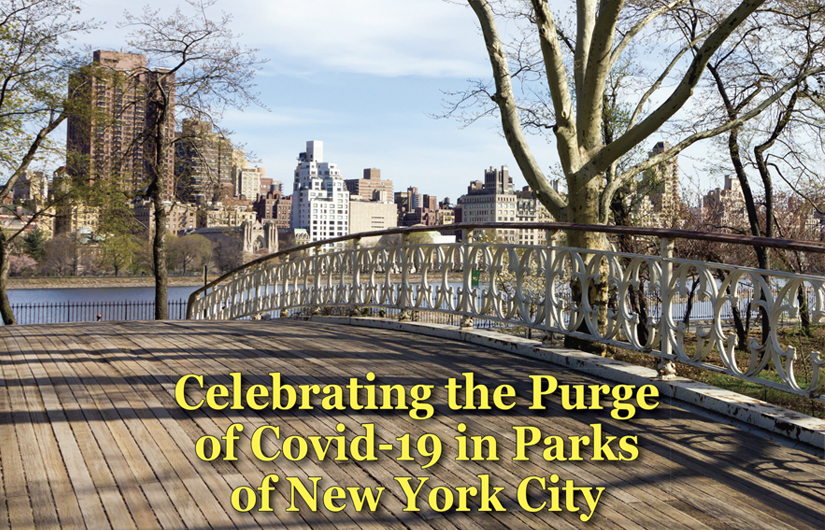 I'm back in New York City, where I grew up, after two and a half years - since New Year’s 2019-2020 - and before Covid kept me from travelling home to visit family and friends and indulge in all The City offers. And it’s incredible. Summer is upon us. The solstice is about to be celebrated, but already New York is in a festive mood. It feels like a possibly premature commemoration for “Victory Over Covid” with masks now off nearly entirely outdoors and less than half the population still wearing them indoors, but these numbers also appear to be dropping quickly.

The weather is also contributing to this party ambience. Beautiful, comfortable, sunny days. A Strawberry full moon, as it is closest to earth, like a giant spotlight above the city’s skyscrapers, brightening up the night even with all the neon shimmering along Broadway in Times Square. But it’s been during the idyllic days when visitors and locals alike are flocking to one of New York’s many wonderful parks. First though, beside the park are horse-drawn carriages lined up, the horses and drivers all decked out. I have in the past hired one to enjoy a romantic interlude when I was still living here. I also went on some tours through the park with my family when I was a child, and my memories remain fresh of those delightful afternoons. Now, to be sure you can hire a carriage when you want, it is best to make a reservation and then you can contribute to deciding the route you will take.

Across from the park is the famous ultra-luxury Plaza Hotel first built in 1890. Not long after, it was demolished and the current structure was constructed and opened in 1907. Through the years, the hotel has been immortalized by films beginning in 1958 when it was featured in Alfred Hitchcock’s North by Northwest. By 2000, the hotel had become the city’s most popular film site. The accommodations, which range from a series of deluxe rooms to resplendent suites, are exquisite. While the décor reflects the classic furnishings of New York’s gala past, they also offer every modern amenity you could hope for. Reopened in May 2021 after closure because of the Covid-19 pandemic, it can be fun to take a quick look in the luxurious, chandelier-crowned lobby.

But enough of that as I was here for the park, and while daylight savings means it staying light until after 8.00 pm right now, I had a lot I hoped to see. So, I began my leisure promenade up the winding path from Columbus Circle watching the kids and adults play in Hecksher Playground and Ball Fields, the grass a deep, lush green as is the broadleaf foliage shading the pathway. I then took a left and headed to the iconic Tavern on the Green where I have had some extraordinary family meals. First built by Calvart Vaux in 1870 to house the sheep that grazed the meadows when the park first opened, it was converted into a rustic tavern where it has been serving celebrities, visitors and locals since 1934. But this time, I just looked in and then continued walking north past Strawberry Fields and next the shimmering indigo Lake. After this, at the north-end of the lake is the Shakespeare Garden where I have seen some great free performances presented by the Public Theater, which has its home located back where I stay with my  family in the Village. Since I’m sorta on vacation, it’s easy for me to get there early in the morning on the day I want to see a play as everyone is required to wait for the distribution of two free tickets per person for that evening’s performance. Just behind the theatre is the Belvedere Castle sitting atop a small hill. Designed and built by Calvert Vaux and Jacob Wrey Mould in 1867, it has some interesting exhibits, but what is best is the observation deck where you can view the expanse of this mammoth rural, urban wonderland. On this walk I next headed east, stopping by the Turtle Pond, a favourite retreat of mine when I want to get away from the crowds that can really fill the park on weekend days or holidays. After saying my hello, I headed to The Met, The Metropolitan Museum of Art, one of the most extraordinary museums I have ever visited, always finding something new to see in the vast, great, high ceilinged halls and galleries. Set at the southern end of Museum Mile along 5th Avenue, just up the road is the Guggenheim Museum and many others. On another day, I’ll visit the more northern regions of the park and most definitely stroll around the mesmerising Jacqueline Kennedy Onassis Reservoir where segments of the Marathon Man were filmed and I would also run the circuit to keep in shape. Towards the west, you can see the Dakota where John Lennon once lived and was fatally wounded in its archway. Moving again towards 110th Street, I will rediscover the lush, undulating Meadows, The Lock and The Ravines. If time, I would love to visit the Conservatory Gardens where we would often go to see flower and orchid shows. In winter, I also often went there to spend some time in the tropics when missing Thailand, recreated in the majestic greenhouse.

Earlier this year, the city celebrated the bicentennial of one of the key landscape architects of Central Park, Frederick Law Olmstead, considered a creative genius as he combined his love for rural America with a sense of democratic idealism in an urban environment, designing this and other parks to give the new arrivals to the city as the industrial revolution unfolded an equal opportunity to indulge in nature and the peace and space it could give to those living in tiny tenements in addition to the more established and elite.

On another day, I visited one more of my favourite greens, this one located between 5th Avenue and 6th, or the Avenue of the Americas, and 40th to 42nd Street, Bryant Park. I have often come here to visit the New York Public Library set along 5th Avenue. I love to sit at one of the long wooden tables lit by antique-style lamps with their classic green glass shades while surrounded by rows and rows of towering bookshelves holding the answers to so many of the mysteries I came here to solve.

The library also serves as a stunning backdrop for the Parisian-style Bryant Park Grill known for its sophisticated dining room and menu, and what I especially like is its wide selection of single malts and whiskeys I can sip as I watch the happenings in the verdant expanse beyond the massive windows. For something much more casual, from April through maybe November, depending on the weather, you can dine al fresco in Bryant Park Café on the western edge of the park along 6th Avenue. Here they serve an American menu and a vast selection of wine, as many as 26 labels sold by the  glass, over half of which are from California.

The park named after William Cullen Bryant, an American romantic poet, journalist and long-time editor of the New York Evening Post, a centrepiece of the park is the monument dedicated to this great man. All throughout the year, but especially during the warmer months, the park is continuously organising activities for people of all ages. There is an ancient white carousel with its rising and falling, colourfully painted horses that the children love to ride. Close by is an activity corner offering what seems like hundreds of free games for children to play at their own miniature tables and chairs. Meanwhile, on many afternoons and early evenings, there are concerts, jazz, classical, hip hop and rock, as well as performances and readings, lectures and discussions. Some Thursday afternoons, they even play bingo with breaks for dancing so no one gets stiff and tense watching their cards and listening for their numbers. And all of this immersed in this verdant oasis in the midst of chaotic, captivating, cosmopolitan mid Manhattan. New York is all you could ever ask for and more…