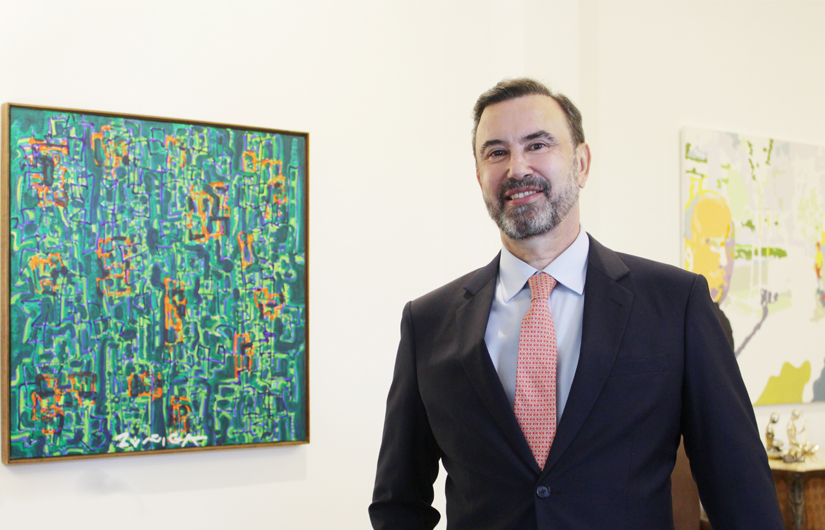 HE Mr Jose Borges dos Santos Junior, Brazilian Ambassador to Thailand, arrived in Thailand in September 2021. Elite+ was recently given the opportunity to interview the ambassador to learn about the bilateral relations between Brazil and and his hopes for post Covid-19.

Ambassador Jose is a career diplomat. He was born in Boa Vista, the capital of the state of Roraima in the extreme north of Brazil, and graduated from the Brazilian Diplomatic Academy in November 1980. He was previously the Consul-General of Brazil in Houston, Texas (2018-2021), and before that the Ambassador of Brazil to the Swiss Confederation and the Principality of Liechtenstein (2016 – 2018). His long list of diplomatic experience includes being the Deputy Head of Mission at the Brazilian Financial Office in New York (2006-2008), Deputy Consul-General of Brazil in Los Angeles, California (2005- 2006), Deputy Head of Mission at the Brazilian Embassy in Bogota, Columbia (1998-2002) as well as postings at the Brazilian Embassy in Brussels, Belgium (1993-1996), Canberra, Australia (1986-1989) and London, UK (1983-1986). He came to Thailand last year with his spouse, Madame Danielle Marquardt Bayer, and his nine-year-old, twins, Ines and Felipe,

Ambassador Jose is a career diplomat. He was born in Boa Vista, the capital of the state of Roraima in the extreme north of Brazil, and graduated from the Brazilian Diplomatic Academy in November 1980. He was previously the Consul-General of Brazil in Houston, Texas (2018-2021), and before that the Ambassador of Brazil to the Swiss Confederation and the Principality of Liechtenstein (2016 – 2018). His long list of diplomatic experience includes being the Deputy Head of Mission at the Brazilian Financial Office in New York (2006-2008), Deputy Consul-General of Brazil in Los Angeles, California (2005- 2006), Deputy Head of Mission at the Brazilian Embassy in Bogota, Columbia (1998-2002) as well as postings at the Brazilian Embassy in Brussels, Belgium (1993-1996), Canberra, Australia (1986-1989) and London, UK (1983-1986). He came to Thailand last year with his spouse, Madame Danielle Marquardt Bayer, and his nine-year-old, twins, Ines and Felipe,

As Brazil will be celebrating its 200th Anniversary of Independence on 7 September 2022, what activities do you have planned for the bicentennial celebrations?

We began our celebrations on this past fourth of April with a webinar organized by the embassies of Brazil and Portugal in Bangkok, in cooperation with Chulalongkorn University, titled “200 Hundred Years of Independence: From the Portuguese Royal Family in Brazil to Brazil’s Independence”. This two-hour-long program included historians from the Federal Fluminense University of Rio de Janeiro, the University of Coimbra in Portugal and Thammasat University in Bangkok.

A second event held on Saturday, 18 June at the Bangkok Art and Culture Centre was the screening of the film “Private Desert” by the Brazilian director Aly Muritiba.


We are also planning a special event to celebrate Brazilian National Day on the seventh of September, which should include a concert by a Brazilian pianist. Bilateral trade between Brazil and Thailand had been averaging around USD 3.5 billion for some time, until these numbers started to rise in 2020. In 2021, trade reached more than USD 5 billion according to Thai statistics (a little less according to Brazilian numbers), and it is on its way to surpass this mark in 2022. Brazil’s exports to Thailand reached USD 3.38 billion in 2021 and imports were valued at USD 1.96 billion.

Brazilian exports to Thailand are still mostly soybeans and their sub-products, and we remain the largest exporter of these products to Thailand, which sustain most of the country’s chicken and poultry production. While this sector appears to be slowly decreasing, our total trade is increasing, which means other Brazilian products such as cotton, leather, shoes and medical devices, are now reaching the Thai market in greater numbers.

Meanwhile, Thai exports to Brazil are very diverse and growing. They include industrialized goods that are part of the value chain such as motors, auto parts, rubber and hard disk drives. So we are fortunate to have a very beneficial trade relationship for both of us.

Brazil’s trade with ASEAN as a whole reached USD 28.8 billion in 2021, USD 19.3 billion in exports and USD 9.5 billion in imports. Those numbers alone show how important the region is for Brazil’s trade, and despite Brazil’s surplus, the imports are also very important for the countries in the region because they comprise oil, cotton, food and many other types of materials that supply industries in the region,generating jobs and development. Thailand is the third largest destination of Brazilian exports in ASEAN.

What advice would you give Thai entrepreneurs who may be interested in trading with Brazil?

Brazil is a huge country, so you can find opportunities in many places, not just the more well-known cities, Rio de Janeiro and São Paulo. Thai investment in Brazil is actually well distributed, with companies present in states as diverse as Rio Grande do Norte, Amazonas, Bahia, Pernambuco and Minas Gerais, as well as São Paulo. Thus, my advice would be to look for opportunities in some of the other regions, including the Amazon, Centre-West and the South.

How big would you say the Brazilian community is in Thailand and what businesses are they involved in?

We estimate that the Brazilian community in Thailand is around 500 people, well inserted in the local society despite the low number. There are some high-profile cases, like the coach of the Thai national football team as well as a number of football players and fashion models. Brazilians are also entrepreneurs in the restaurant and hospitality sectors, and some CEOs directing multinational companies in sectors such as beverages, logistics and gems. There is also a considerable number of Brazilian women married to high-level executives of companies from other countries which operate in Thailand. How has the coronavirus pandemic affected Brazil and relations between Brazil and Thailand as well as ASEAN states?

Surprisingly, the pandemic made it very clear how interdependent countries have become through globalization. Food security has become a prime concern, and many countries, especially major food producers and exporters have come to realize they can profit from Brazilian expertise in agribusiness.

The coronavirus pandemic has hit every country in the world in a hard way as we have all witnessed. Direct contact between countries became more difficult, and cultural events I consider a key element for people to get to know one another and deepen ties have been very limited. Part of the Brazilian community returned to Brazil, and tourism from Brazil to Thailand, which had been growing steadily in the years preceding the pandemic, had a dramatic set back. Brazilians had just begun to discover Thailand as a tourist destination, and I am sure they will start flocking back as soon as life returns to normal.

The good news is that, despite all this, Brazil’s trade with Thailand has actually managed to grow, a consequence of our agribusiness never stopping. We are aware of the importance of Brazil’s food and raw materials to the global economy and have worked to continue to provide for our trade partners. Since arriving in Thailand last year, what has impressed you most about the country and its culture?

The natural beauty of the country and how friendly the Thai people are would probably sound like a cliché, but my wife and I have also been impressed with the quality of services, especially in the tourism and hospitality sectors. It is something not experienced in the same proportion elsewhere.

During your travels around the Kingdom, what has impressed you most?
One of the outstanding aspects of life in Thailand, in my opinion, is the sense of security. I do not remember even one single instance during these nine months in the country when I could say I did not feel entirely safe. The other admirable aspect of this country is how disciplined the Thai people can be. I am surprised to see most people are still wearing masks in public, even if it is no longer compulsory.

It is only natural that you should primarily be interested in the Asian countries that surround you, but I challenge you to be curious enough to research and explore beyond your region. I can promise you would be pleasantly surprised, not only by how much diversity and cultural richness a country like Brazil can offer, but also discover some many similarities in family values and joie de vivre.