Celebrating 60 Years of Bilateral Relations between Chile and Thailand 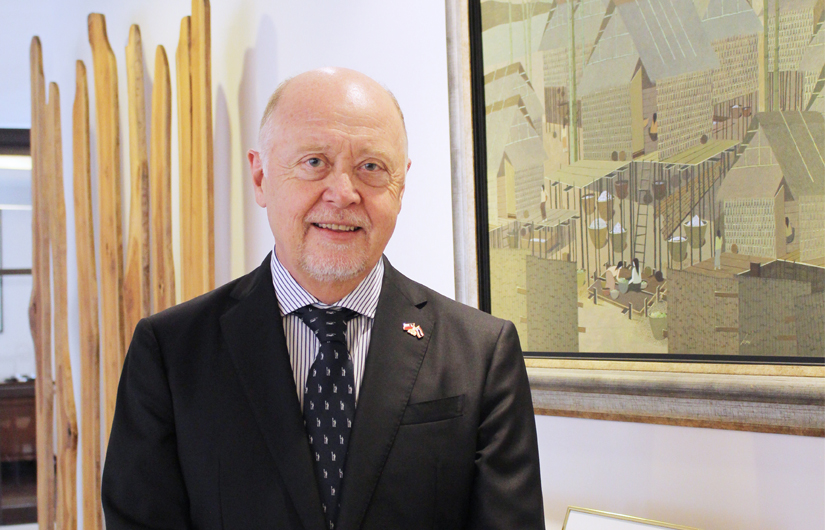 Celebrating 60 Years of Bilateral Relations between Chile and Thailand

This year marks the 60th anniversary of bilateral relations between Chile and Thailand since officially established in 1962. HE Mr Alex Geiger, ambassador of Chile to Thailand, was kind enough to sit down with Elite+ to discuss the expansive business, trade and cultural relations that have evolved between the two countries over the past six decades.

Ambassador Alex Geiger arrived in Thailand from Santiago in September 2021, to assume his post after an already impressive diplomatic career that he began in the early 1980’s as Third Secretary at the Embassy of Chile in Lebanon, his first diplomatic assignment. He has also served Chile in Canada, France and the United Kingdom. More recently he represented his country as their ambassador to Morocco for five years and witnessed the Arab spring uprising in Egypt during his ambassadorship there. He´s married to Aline Faddoul, originary from Lebanon, and they have two daughters Tracy and Jocelyne. The official 60th anniversary of Thai-Chilean bilateral relations will be celebrated on 29 October of this year. In July 1981, Chile opened its resident embassy in Bangkok while Thailand established its resident embassy in Santiago in 1994. A major event in the bilateral relations was the Official Visit of the then Crown Prince, HM King Maha Vajiralongkorn Phra Vajiraklaochaoyuhua, in October 1996, when he met the highest authorities of Chile and visited cities like Valparaiso, Viña del Mar, Antofagasta and Santiago.

Ambassador Alex remarked, “Since the beginning of our diplomatic relations in the 1960’s up to the present, our partnership has been built on a very strong and solid foundation based on political, cultural, economic and trade cooperation.”

Chile has recently elected a new president, Gabriel Boric, and a new constitution is being discussed to address the new challenges ahead of the country. Ambassador Geiger shared, “Chile is doing its upmost to improve the quality of our democracy and next September the people shall vote on a draft for a new constitution more in tune with the century’s challenges. However, our foreign policy has been traditionally a state policy; hence, do not foresee major changes as far as relations with the world, even though I see an emphasis in the protection and promotion of human rights. If changes are to come, they will only bring about fairer and more sustainable trade between Chile and other countries. Both Chile and Thailand are committed to a sustainable model to recover from the Covid-19 pandemic through environmentally friendly directives, for example, the use of non-fossil energy. Chile is heavily involved in renewable energy, solar, wind and green hydrogen. Chile also strongly supports Thailand´s leadership in APEC this year.

Chile’s open market economy focuses on its natural resources – agriculture, mining and fishing - and trading with the world. Chile ranks well in human development and income when compared to other emerging economies in our part of the world.

In 2021, Chile was Thailand's third largest trading partner in South America with a bilateral trade volume valued at USD 1.3 billion. The Thailand – Chile Free Trade Agreement signed in November 2015, is a key trade mechanism between the two countries under which tariff rates for all products are to be lowered to 0 percent by 2023.

Despite the two years of pandemic challenges facing the world, our Trade Office highlighted that there has been a jump in trade volume between Chile and Thailand this year. “Chile is the second largest exporter of salmon consumed in Thailand after Norway, and Chilean wine, the perfect complement to amazing Thai gastronomy, is fast becoming popular in Thailand.” The Embassy has also identified opportunities for both countries in the digital economy, and we plan to build future cooperation between Chile and Thailand through seminars, workshops and online platforms.

The Chilean community in Thailand is rather small, around 300 persons. About 20,000 Chileans were visiting Thailand each year before the pandemic. “We have a visa waiver program in place so our citizens don’t require a visa. We welcome Thais to visit Chile, as our beautiful country has much to offer. Poets have described Chile possessing ‘a crazy, extreme geography’. In the north, we have a hot, desert climate where our solar energy industry thrives. Our central, or lake, region offers favorable conditions for vineyards while the extreme south is the glacier Antarctica. Chile has been chosen as one of the best destinations for world tourism. Lastly, there is the Easter Island of the Polynesian Triangle.” Ambassador Alex proudly stated, “The recent second episode of the Netflix aired documentary narrated by former US President Barack Obama on Our Great National Parks was dedicated entirely to Chile”. We are very proud that for the sixth consecutive year, the prestigious World Travel Awards has recognized Chile as the World’s Best Adventure Tourism Destination.

Touching on the coronavirus pandemic, he sadly commented, “The world has lost a lot of wealth due to the pandemic. Financial resources that could have helped many social issues were diverted to combat this challenge. Chile is a democracy, and we have always worked to fight poverty. It is human tragedy that many lives were lost to Covid-19. On a positive note, we have seen many humbled by this situation. We must remember the fragility of our ecosystem to protect our energy resources and food security.”

As restrictions are lifted with recovery from the Covid-19 pandemic, Ambassador Alex has started planning to host a number of activities to celebrate the 60th anniversary of Chilean-Thai bilateral relations. “We are looking to promote Chile from astronomy to gastronomy. It is not only our clean skies that make the country one of the best places to study astronomy, our significant infrastructure is also a key. Many professional observatories are located in northern Chile where they investigate the universe in optical, infrared, sub-mm and radio wavelengths. We have planned a seminar with NARIT astronomers and an activity with the Bangkok Planetarium later this year”

Chile is a long, narrow country on South America’s western coastline whose dramatic landscapes may have played a part in the country’s production of great poets. The country is affectionately known by its inhabitants as the “país de escritores” or “country of writers”. This is because two of the country's most well-known and beloved literary figures are the writer and poet Gabriela Mistral and Pablo Neruda, both of whom won the Nobel Prize in Literature.

“To signify our love for literature and to pay tribute to our 60th anniversary, we are presenting to our Thai friends a special edition of some of the works of our famous Chilean Nobel Prize Laureates in the Thai language. The embassy is also sponsoring a painting contest among school students on their interpretation of Chile.”

Since Chile joined APEC in 1994, the bilateral relationship between the two countries has been strengthened by deepening ties in areas of common interest, political, economic and trade, particularly in international forums. Chile and Thailand have signed numerous cooperation agreements in areas as diverse as science and technology, education, culture, visa-free travel and avoidance of double taxation as well as cooperation in agriculture and sanitation. All told, Chile and Thailand have developed bilateral relations that will only grow stronger in the years ahead.