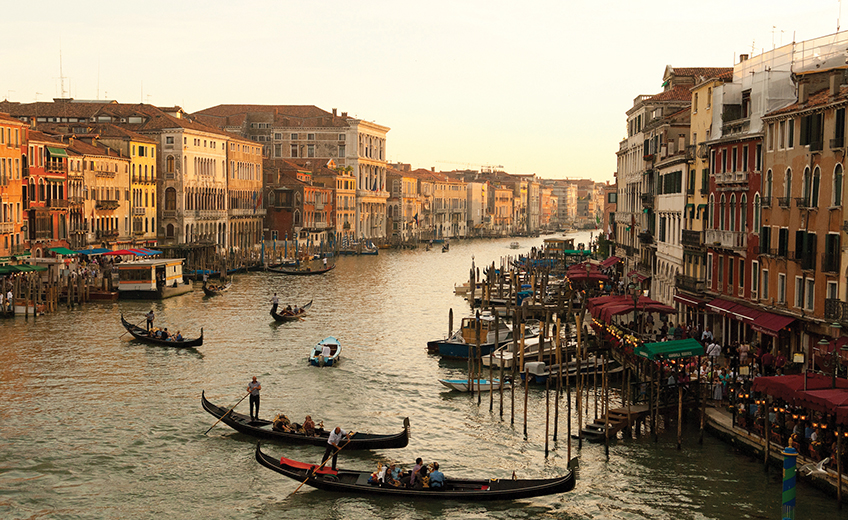 After checking into the Hotel Palazzo Giovanelli, we dropped off our bags and headed on foot towards the Rialto Bridge. We navigated the maze of narrow alleyways guided by signs posted at street corners pointing the way to important landmarks. The labyrinth of shady passages soon released us into the crowded enthusiasm of modern Venice. Cries of uniformed boatmen rose above the din of tourist commotion as we consumed our first excited look at the iconic 50-metre span. Thousands of people, boats, gondolas, cafés and restaurants lined the bustling canal. Couples of all ages posed for digital snapshots as proof of their presence in Europe’s most romantic city.

I’m not a romantic guy. So when my wife suggested we spend our 20th wedding anniversary in Venice, I feared her expectations might be way too high. But after years of following me to remote locations where dung is still being used as a building material, this year I had no choice but to follow Barbara’s romantic muse. We climbed to the centre of the bridge to take our turns admiring the famous views amid the crush of tourists. Below us, barges delivered supplies, water taxis ferried passengers and gondoliers entertained as they have since the 11th century. We enjoyed only a glimpse down the Grand Canal before being gently repositioned by the next wave of enthusiastic gawkers. Overwhelmed by the theme park atmosphere, we decided to escape the crowd and take a quiet stroll through the nearly empty neighbourhoods just a stone’s throw away. The area around the Rialto Bridge takes its name from rivo alto (high bank), and was one of the first parts of Venice to be settled. The city was founded in 421 CE following the dedication of the San Giacomo Church on what was then the islet of Rialto. At first, Venice was a group of united lagoon communities fleeing invaders from the north during the last years of the Western Roman Empire. Over the centuries it grew into an improbable place, built on more than one hundred small islands interconnected by four hundred bridges. Millions of closely spaced foundation timbers driven through soft layers of sand and mud support the many baroque and renaissance buildings.

The city is divided into six administrative districts or sestieri . The district directly west of the Rialto Bridge, where Barbara and I went wandering, is known as San Polo. It was historically the commercial quarter, once lined with stalls selling exotic spices, fabrics from the East and bounty from the sea. Today it is primarily a residential area dotted with churches and piazzas (public squares). It wasn’t long before our jet lag caught up with us and we were hopelessly lost, tired and hungry. In the distance we noticed a row of square tables draped with white cloth next to the glow of an open doorway. “Food,” we announced simultaneously. It was still a bit early for dinner so we weren’t sure if the restaurant was even open. A handwritten sign posted at Trattoria Antiche Carampane read: “No Lasagne, No Pizza. No Menú Turistico.”

“Perfect,” we agreed. A smiling, slightly balding  middle-aged man appeared in the doorway as we attempted to sneak a peek inside. “Ciao … please … come in,” he said in heavily accented English. He proceeded to ask where we were from and led us to a small table in a back room.  No doubt we looked like lost and confused tourists. During  a slight pause in his review of the night’s menu, I glanced over at Barbara and said, “We will have whatever you recommend.”

“Va bene,” he replied with a wink of approval and turned towards the kitchen.

Soon a bottle of wine and a small paper cone arrived overflowing with tiny fried shrimp. Within a half hour, several groups were seated and the small dining room was almost completely filled. I was nearly shoulder-to-shoulder with an older Italian gentleman named Piero, who commented that this was his favourite restaurant in all of Venice. The tables were so close together, it was almost impossible not to greet and share the experience with neighbours. We lingered for over an hour laughing and sharing stories with a small group before making our way back to our hotel.  By the time we left the tratorria, the sun had dipped below the horizon, leaving only the soft hue of twilight and eerie pockets of orange/yellow light to illuminate our retreat. The streets were quiet. Day-trippers had long ago returned to their beach resorts or found their way back to their cruise ships. We walked the quaint cobblestone corridors virtually alone.

Our night was intentionally short. We woke with the sun on the morning of our anniversary and left the hotel without even taking a moment to explore the 16th-century palace that would be our luxury base camp before boarding our ship for a Mediterranean cruise. We chose the newly renovated four-star hotel because it was far away from the tourist craziness of the Rialto and next to the San Stae stop of the public water bus known as the vaporetto. Different lines of boats travel up and down the Grand Canal, making convenient stops at well marked docks along the way. Visitors can buy a single-ride ticket or passes of different durations that allow unlimited use from one day to one week.

We shuttled back to the Rialto Bridge on the vaporetto just minutes after sunrise. The bridge was empty of tourists. For a moment, Barbara and I had a private platform to witness the subtle splendour of Venice. A sprinkling of gondolas dotted the peaceful canal, leaving a small ripple in their wake as they glided across the calm waters. Cafés served steaming cups of cappuccino to early risers. The city’s workers began to arrive and shopkeepers prepared for the daily onslaught of visitors. The banks of the Grand Canal are lined with more than  170 buildings, most of which were built between the 13th and 18th centuries. Many combined a residential palace with a business office and a warehouse at water level. At the peak of its power and wealth in the 13th century, Venice was the most prosperous city in Europe and controlled a vast sea-empire in the Mediterranean. During this time, the wealthiest families vied to build the most spectacular palace along the Grand Canal. As the first light of day touched the historic old palaces, we were given a hint at this glorious past.

The Venetian Republic survived for over a thousand years until it fell to Napoleon in 1797. After the fall,  construction of housing in Venice was suspended. The cinematic scene unfolding below us would have looked very much the same to couples standing on the bridge at sunrise for the past two hundred years. From a distance, the elegant decay of what could easily become an overcrowded tourist trap is eclipsed by the sentimental fantasy to escape into the romantic pre-modern world of our imagination, even if only for a few short hours.

We slowly made our way back to the vaporetto and rode a short distance to Piazza San Marco (Saint Mark’s Square). Dozens of gondolas lined the edge of the canal, cloaked in their protective royal blue coverings. We passed local art students sitting in the golden glow of the rising sun sketching the timeless landscape at the mouth of the Grand Canal. Before entering the famous square, we detoured into the back streets of the San Marco district. Small bridges led us to rows of sleeping houses adorned with colourful flower boxes below shuttered windows. Peeling plaster and weathered brick added texture and context to the ageing façades.

By the time we returned to Piazza San Marco, there was a small but growing line of people waiting for the first tours of the spectacular Palazzo Ducale (Doge’s Palace). Piazza San Marco is the most famous public square in Venice and contains two of the city’s most important sights: the Basilica di San Marco and Palazzo Ducale.

We didn’t plan to stay long in the square. We had plenty of time to do the tours another day, so this morning we found a small café for a cup of cappuccino and to admire the exterior sights of the piazza. Throughout the long history of the grand square, it has been the social, political, and religious gathering place of the city. The Basilica of Saint Mark’s is the most famous church in Venice and is considered one of the best known examples of Byzantine architecture. Built in the 11th century, the present church is the third on the site and said to have been decorated with the booty of returning sea captains. For centuries, merchant ships were required by law to bring back a precious gift for the so-called “House of Saint Mark”.

We escaped back to our hotel just before the massive cruise ships dumped camera-laden newcomers into the piazza. The bulk of the cruise ship passengers arrive in Venice along with tours from mainland hotels at around 10am. By then, Barbara and I were safely back at our hotel having a late breakfast and planning the remainder of our day. After our mid-day siesta, we made the mistake of returning to Piazza San Marco a bit too early.

Roughly 22 million tourists come to Venice each year and almost all of them find their way to the piazza. When we arrived via the crowded vaporetto, we were pretty sure all 22 million were in the square that day. We returned to the piazza for a very specific purpose. Barbara had spotted some jewellery stores off the piazza in the morning and wanted to shop before our early anniversary dinner. We quickly found what she was looking for, a small gold gondola pendant for her bracelet.

The gondola is an unmistakable symbol of Venice. For centuries, gondolas were the chief means of transportation. To prevent an ostentatious competition of individual wealth, an official decree in 1592 called for all gondolas to be painted black. It is estimated that there were 8,000 to 10,000 gondolas on the waters of Venice during the 17th and 18th centuries. Today, along with being able to  manoeuvre the gondola through the tight spaces of Venetian canals, gondoliers must possess foreign language skills and pass a comprehensive exam on Venetian history and landmarks.

Ever since we arrived, we had considered whether or not we would take the expensive boat ride. We watched as stripe-shirted singing gondoliers manoeuvred the traditional flat-bottomed boats in and out of tight canals. We witnessed irritated boatmen negotiate traffic jams to the amusement of tourist onlookers, and we waved at slightly embarrassed kids as they passed by us on the Grand Canal. It looked like fun, but not the charming and romantic experience of myth and legend.

A ride was probably inevitable, but it wasn’t high on my “must-do” list as we once again strolled through the maze in the direction of the Rialto Bridge. To our surprise, we suddenly hit a dead end. The ally we had ventured down stopped at a stairwell leading to a gondola station with two boats sitting empty. It was an impossible coincidence. Barbara looked at me and smiled from ear to ear. Serendipity had intervened. I summoned my inner Casanova as a gondolier approached. After settling on a time and a price, we entered the charming back canals for our 40-minute float in Europe’s most romantic city.