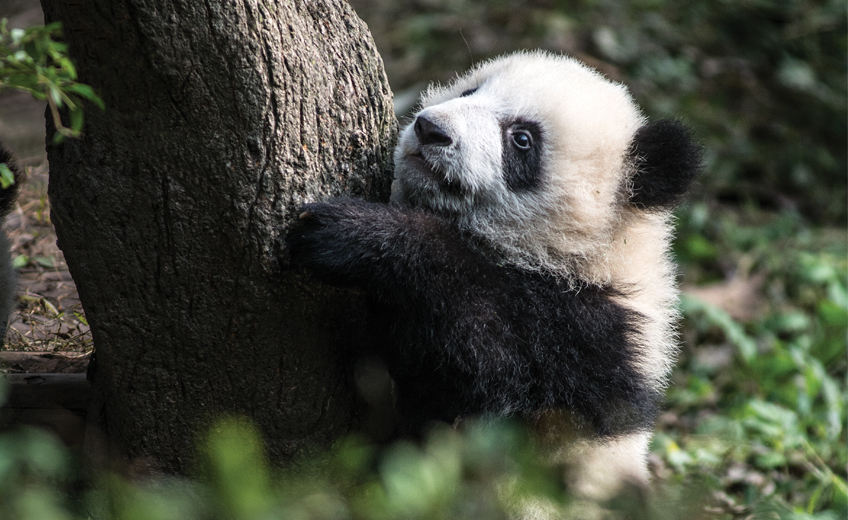 With its stunning natural beauty and long cultural traditions, Sichuan Province of southwest China boasts numerous world-class tourist attractions. The fertile Sichuan basin was one of the first areas settled in China and named for four of the nearly 80 rivers that flow through the province. Sichuan is the most populous province, with approximately 10 per cent of China’s population, and is home to the iconic giant panda.
The capital city of Chengdu has managed to maintain its old-world charm while modernizing at blazing speed. Glass and steel buildings increasingly tower over the colourful streets, hutongs, parks and teahouses of antiquity. Home to over 12 million, Chengdu is one of the fastest growing cities in the world and is slowly being discovered by tourists seeking to explore China beyond its more famous cities of Beijing and Shanghai.

Chengdu Research Base of Giant Panda Breeding
Sheltered in the bamboo forests in the mountainous western and northern parts of Sichuan Province live the majority of the remaining wild panda populations. Estimates range from a little over a thousand wild panda to 1,864, as reported by the Chinese government in its recent National Giant Panda Survey. There is a growing network of research centres, sanctuaries and breeding facilities in Sichuan Province, but the Chengdu base is the only one open to the public. The Chengdu Panda Base has become one of the major research bases and international breeding programmes for giant panda.

Wuhou Temple
Named after the famous military strategist, Zhuge Liang of the Three Kingdoms period (220-280 AD), Wuhou Temple is divided into five sections: the Gate, the second Gate, the Hall of Liu Bei, the Corridor and the Wuhou Temple (Hall of Zhuge Liang). The front shrine is dedicated to Liu Bei, the Shu Kingdom’s first emperor. There are also more than 40 carved wooden statues of generals and famous personalities from the Han and Shu periods. The temple complex is an oasis in the middle of the city, covering 37,000 square metres of interconnected paths through gardens and wooded areas with old cypress trees.

Du Fu Thatched Cottage
Located in one of Chengdu’s most upscale neighbourhoods, the tranquil Du Fu Thatched Cottage is a park and museum in honour of the celebrated Tang Dynasty (618-907) poet. Du Fu fled to Chengdu in 759 during the An Lushan Rebellion. The four years he lived in his humble hut were among his most productive, producing 240 poems. The original thatched hut of Du Fu was destroyed. Today the 24-hectare grounds are dotted with traditional Chinese gardens, bamboo and plum trees, winding streams, bridges, pavilions, a reconstructed thatched cottage and Du Fu Memorial Hall. The historical and cultural area of Chengdu known as Wide and Narrow Alley consists of three parallel ancient city alleys: Wide Alley (Kuan Xiangzi), Narrow Alley (Zhai Xiangzi), Well Alley (Jing Xiangzi) and the 45 courtyards along and between them. Once a city within Chengdu called Mancheng City during the Qing Dynasty (1644-1911), the area was turned into a new shopping and tourism magnet in 2008, lined with cafes, tea houses, bars, restaurants, numerous shops, crafts, snack vendors, food stalls and street entertainment.

Anshun Bridge (Dongmen Bridge)
Winding through Chengdu on its way south to the Yangtze River is the Jin River (Brocade River). Once a commercial corridor, the river is now a peaceful reminder of the city’s once-thriving brocade industry during the Eastern Han Dynasty (25-220). Spanning the river is the reconstructed Anshun Bridge, which was destroyed by flood in the 1980s. Beautiful from a distance on an evening walk, the glowing covered bridge houses a large restaurant specializing in Sichuan cuisine and connects popular restaurants and bars on either side of the river.

Pingle Ancient Town
Located in Qionglai City, 64 kilometres southwest of Chengdu on the Baimo River, Pingle Ancient Town is a historical and cultural experience developed to generate tourism. Ancient towns have become popular weekend retreats for fast-paced city dwellers over the past 20 to 30 years. Pingle Ancient Town was an essential wharf in the past, dating back more than 2,000 years. Many of the buildings lining the 22 ancient streets date from the Ming and Qing dynasties. The tourist area of Pingle contains restaurants, gift shops, hotels and cultural activities just a short distance from a glimpse of local life in the narrow cobblestone alleys across Leshan Bridge. Wannian Temple, Mount Emei
Wannian Temple, which means “Temple with Thousands of Years of History”, is located in the wooded forests on Mount Emei. Mount Emei sits at the western rim of the Sichuan Basin, and at 3,099 metres is the highest of the four sacred Buddhist mountains of China. Wannian Temple is one of the eight main temples at Emei Mountain. Legend claims that the mountain was where Buddha Samantabhadra gave lectures on Buddhism. Originally built during the Eastern Jin Dynasty (265-420), Wannian Temple is famous for its Song Dynasty (960-1279) Buddha Samantabhadra statue, which weighs over 60 tonnes and stands 8 metres tall.

Qingcheng Mountain
Considered one of the birthplaces of Taoism, Qingcheng Mountain is a scenic area at the far eastern edge of the Tibetan Plateau that covers 200 square kilometres, and is one of the most important Taoist centres in China with 11 well preserved Taoist temples. The mountain is famous in Chinese history as the place where 2nd-century philosopher Zhang Ling founded the doctrine of Taoism. One of the most popular ways to ascend the mountain is by taking a ferry across Yuecheng Lake to a cable car that ends near the top of the mountain, with just a 20 to 30-minute walk to Shangqing Temple.

The Leshan Giant Buddha
Built between 713 and 803, the 71m-tall Leshan Giant Buddha was carved out of the cliff face of Xijiao Peak overlooking the confluence of three rivers (the Min, Qingyi and Dadu) in the Mount Emei Scenic Area. A monk named Hai Tong initiated the project believing that Buddha could calm the turbulent rivers that were a constant problem for shipping vessels. The Leshan Giant Buddha is the largest Maitreya Buddha statue carved out of a cliff. In December 1996, the location of the Buddha was included by UNESCO on the list of the World Heritage sites along with Mount Emei.