CITY OF LIFE AND DEATH 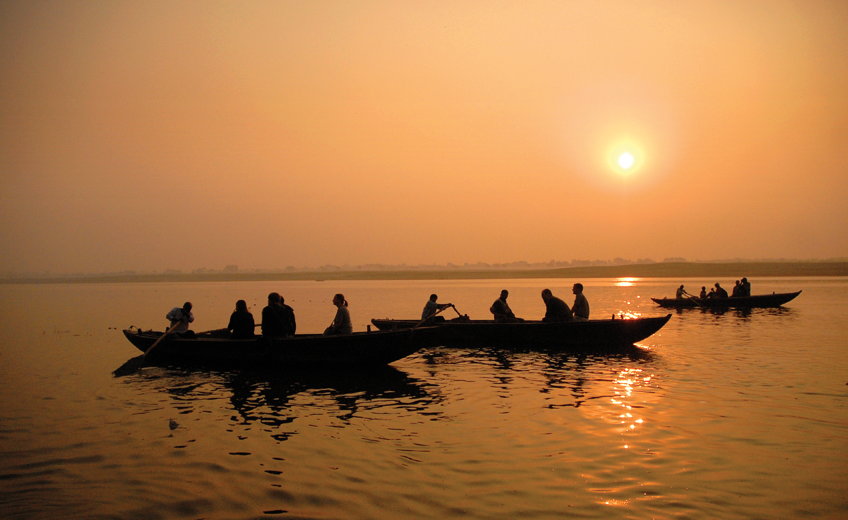 It was only my first full day in India but I was already beginning to appreciate the beauty and rhythm nestled amidst the seeming chaos that surrounded me. As the last bit of daylight surrendered to eerie pockets of neon illumination, I mounted a cycle rickshaw near my hotel and was quickly swept through a narrow meandering maze of tiny alleyways. Cars, rickshaws, scooters, bicycles, pedestrians and sacred cows all competed for space in a disorderly ballet. Women dressed in saris created a colourful mosaic to accompany the cacophonous blare of honking horns that together turned the crowded streets into a noisy, swirling sea of humanity flowing towards the holy River Ganges.

After weaving my way through the growing crowd of pilgrims, tourists, beggars, hawkers and homeless to the famous ghats along the river, I boarded an old wooden boat with several other curious foreigners. We were each handed a small candle packaged in a paper cup with orange marigold flowers to present as an offering to the river. Slowly our two young boatmen manoeuvred us forward until we reached an area where a dozen fires burned brightly in the blackness, their reflections dancing gently on the waves. As we neared the cremation ghat, Manikarnika, we joined several other boats filled with people silently witnessing a thousand-year-old drama unfolding before us. The only movement interrupting the respectful stillness was a young British couple carefully placing their fragile flames on the dark river in hopes that the gods might receive their prayers.

We didn’t get close enough to see detail in the flames, but the unspoken reality of what was burning in the distance left us without words as our boatmen turned back towards the bright lights of the central ghats. While it is obvious that death is the most unavoidable of human realities, it is welcomed in Varanasi without the fear or trepidation that can be so disturbing to Western sensibilities. Death is also an unavoidable part of the Varanasi experience. There are few places on earth where life and death are so easily embraced as two parts of a single whole, and tourists are confronted with an almost constant overlap of the physical and spiritual worlds. It is impossible to remain untouched by the atmosphere of devotion that defines Varanasi.

Before I had time to fully comprehend the unfamiliar sights and sounds, we found ourselves back at Dashashwamedh Ghat where a mass of faithful were gathered for the nightly aarti ceremony. A Hindu priest raised and lowered a glowing offering of open flames as the sounds of bells, chanting and hypnotic song washed over us from unseen loudspeakers. As I steadied my camera to capture the spectacle, I felt completely overwhelmed by an intoxicating mix of adrenaline and jet lag. Nothing in my travels had prepared me for the intensity I was experiencing or the utterly bizarre collection of people that had somehow found their way to this particular place on this particular day.

For thousands of years, India’s Hindus have been making the pilgrimage to Varanasi to be seen by the gods and to purify their souls in her holy waters. Also known as Benaras and Kashi (City of Light), it is considered among the oldest living cities of the world. According to legend, the Hindu deity Lord Shiva founded the city around 5,000 years ago. He is called Mahadev, the greatest of the gods, the one the gods themselves worship, and he is thought by many to still live here, walking the streets of Varanasi in disguise. For Hindu faithful, Varanasi is the most sacred place on earth and the River Ganges the holiest river. To bathe in its waters is said to lead one on a path to Moksha (liberation). To die within sight of it is to be blessed and to be cremated and have your ashes scattered in the river is the final salvation in the endless cycle of birth and rebirth that is at the heart of Hindu philosophy.

People from all over India come to live out their lives in Varanasi. But it is not the physical act of dying in Varanasi that liberates an individual from the cycle of endless births; it is the wisdom delivered by Shiva at the moment of death that releases the soul from suffering. It is Shiva himself who whispers the secret of Om, the verbal encapsulation of the “Supreme Reality”, into the ears of the dying. This ultimate revelation of God, delivered by God, happens only in Varanasi where the sacred city, the home to Shiva, and the River Ganges form a triple blessing found nowhere else on earth.

The modern city of Varanasi is a city of poverty and wealth, joy and suffering, and life and death. It is also home to one million residents who have built houses, schools, parks, cyber cafes, businesses and luxury hotels, among the temples, markets, mosques and ashrams of antiquity. Just south of the city, the Benares Hindu University is a centre of Sanskrit learning and Hindu philosophy that has been attracting students and scholars since the early 1900s.

For Buddhists throughout the world, nearby Sarnath is as sacred as Varanasi is to Hindus. The fifth century Dhamekh Stupa is said to have been built on the site where the enlightened Siddhartha Gautama, who came to be called Buddha, delivered his first sermon to five ascetics in 500 BCE. But by the time Buddha shared his Four Noble Truths at Deer Park, just 10 kilometres northeast of Varanasi, the city was already a sacred gathering place and vibrant commercial centre renowned for its weavers and spectacular brocades. Today visitors still shop in the markets and fine textile shops for cotton weaves, saris and scarves.

While Varanasi increasingly takes on modern textures, the city is largely an 18th-century creation with a 13th-century infrastructure. By the late 1700s, the holy city came under British administration and was substantially rebuilt through the patronage of the Maharajas and India’s princely states after a long period of neglect under Mughal dominance. Many of the city’s most important temples and ghats date from this era, but the Varanasi we now visit was built in stages. Over hundreds of years, talented stone workers from Rajasthan and Maharashtra engineered an architectural masterpiece. For some 6km, hundreds of sandstone steps run from the top of a 20 metre-high escarpment to the base of a temperamental river that swells every year from monsoon rains to swallow the great ghats.

I returned to Dashashwamedh Ghat before sunrise the next morning. The streets were already filled with women wrapped in magnificent colours, assorted shopkeepers, children selling trinkets and beggars of every description. The sacred river lay peaceful as the first light of the rising sun revealed the domes, minarets, temples and nearly 90 ghats that identify the famous Varanasi skyline. The mood and atmosphere along the river were very different than just a few short hours before. The intensity of the evening aarti, the chanting crowds and haunting glow of distant cremation pyres were replaced by the subtle beauty of picturesque masonry, soaring stairways and the faded pastel paint on the walls of temples and riverfront palaces stretching as far as the eye could see. Hundreds of people began to emerge from the labyrinth of alleyways making their way down the steep stone steps to begin their day at the river’s edge. I again boarded a boat powered by a young oarsman for what would prove to be an unforgettable dawn tour. Men and women of all ages performed their morning rituals while others waded into the river, carefully caressing the water with an unexpected tenderness. As the crowd grew larger the lower steps began to fill with the glorious colours of India. One by one, women entered the river fully clothed for a ritual “dip”, displaying an elegant modesty, unaffected by the floating onlookers equipped with digital cameras and video recorders.

The intricate complexity of Varanasi’s sacred landscape flows and changes with the currents of time. Every god and every ghat has transcendent importance. There are different ghats for different gods, different religious sects, different castes and pilgrims from different regions of India. The sacred zone of Varanasi is bound by the Varana River that flows into the Ganges in the north and Asi River in the south where the 2,510km mother river of India makes a sweeping curve and flows northwards back towards its icy origin in the Himalayas before continuing to its terminus in the Bay of Bengal. The Hindu name for the Ganges is “Ganga”, used for both the river and the goddess mistress of Shiva. The Ganges and its tributaries drain a 1,000,000 sq km basin that supports 300 million people in an area with one of the world’s highest population densities. But the Ganges is much more than a river; it is symbolic of an Indian culture intertwined with spirituality, history and tradition unaltered by the constant advance of modernity. What is to many visitors an unbelievably dirty and irreversibly polluted waterway is considered by Hindus to have “ritual purity” and the power to erase many lifetimes of sin.

After floating past dozens of bathing ghats where priests known as “pandas” sit under mushroomshaped bamboo umbrellas administering to the needs of pilgrims, I again returned to the northern part of the sacred zone and the Manikarnika Ghat. Gone were the beautiful saris and the pious crowds beginning a new day with the rituals of life. The “burning ghat” is a solemn, colourless place under the exclusive dominion of the Doms. For hundreds of years Dom Raja and his family have been collecting fees for funeral wood, shroud cloths and even for access to the eternal flame, without which no pyre may be lit. As my boat approached, I could see the shrouded form of a body lying on a bed of logs as a man (presumably the eldest son) dressed in a simple white garment circled the deceased with twigs of holy kusha grass lighting the pyre in an ancient cremation rite. Once again I was challenged to suspend judgement and simply experience the spectacle of life and death displayed so publicly along the banks of the Ganges. As I began to look past the filth and see beyond the broken and disfigured beggars, I began to sense the powerful lure that has drawn pilgrims, poets, writers, philosophers and intrepid travellers to Varanasi through the ages. Along the left bank of the Ganges, between the Varana and Asi rivers, the entirety of human spirituality has played out for nearly 3,000 years. It is a place where the past and present have always collided, and the boundaries between life and death are blurred for the devout in search of liberation. It is the birthplace of new ideas, new beliefs, and a repository of ancient rituals. Varanasi has absorbed numerous outside influences, survived countless definitions of “modern” and has also been the victim of destructive forces in a world with different gods and contradictory truths. Throughout history, from the earliest Aryan nomads from the Ural Mountains and Caucasus who laid a foundation for the Indian social system in 1500 BCE, through often confrontational influences of Arabs, Persians, Mongols and the British Empire, customs and traditions have been moulded and shaped, created and destroyed, but have always emerged as something uniquely Indian. Varanasi is still gripped by centuries-old intolerances and like all of India, struggles to reconcile Gandhian principles of simplicity and austerity with a growing middle class that has an appetite for wealth and the desire to exploit new economic opportunities in the world’s largest democracy. Invariably, Varanasi will remain an enigma to Westerners and a paradox for Hindus, but for those who believe, it is where suffering ends through the soft whisper of a living God.