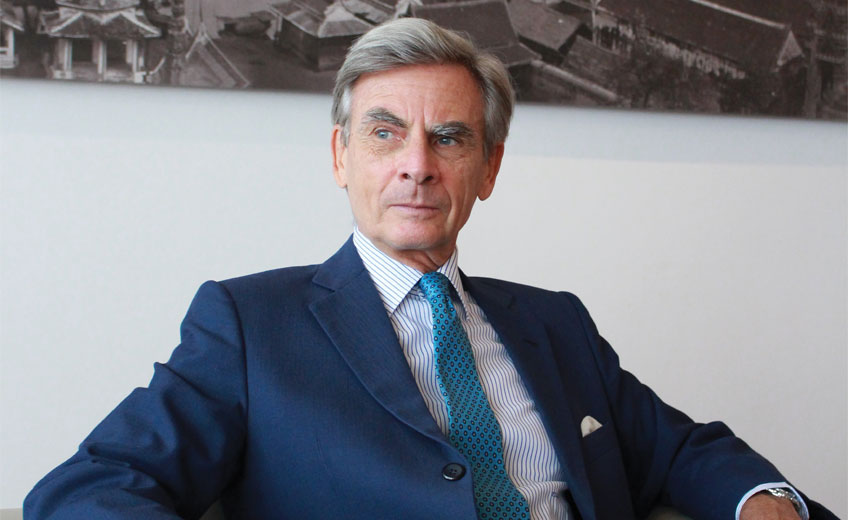 Despite the distance across the globe, Thailand and Italy have maintained a long, cordial friendship and diplomatic relations. Now in its 150th year, the Thai-Italian relationship has expanded from trade and commerce to arts and culture, bridging two countries from different continents. Italy’s ambassador to Thailand, Francesco Saverio Nisio, who has been in Thailand since 2013, gave Elite+ insights into the long, illustrious relationship from past to present and onward into the future.

2018 marks 150 years of diplomatic relations between Thailand and Italy. Please give us a little insight on how they started and flourished.

The first Italian to visit the Kingdom of Siam was Nicolò Conti in 1430, but official diplomatic ties between Italy and Thailand were only established with the Italy-Siam Treaty of 1868, which basically dealt with trade issues and the concession to the Kingdom of Italy of a diplomatic legation in Bangkok. Significant exchanges at political, economic and cultural levels soon took off, also thanks to the remarkable way in which King Chulalongkorn was able to modernize his kingdom and pave the way for friendly relations with other countries. In fact, he was the first Siamese king to officially visit Europe and Italy was the very first country he stopped over at on his European tour. Relations between Italy and the Kingdom of Thailand further flourished in the first half of the 19th century due to exchanges in various fields, especially artistic ones.

We are proud to list the names of the numerous Italian architects and painters who were invited to the Court of Siam and commissioned to create illustrious works of art that are still of immeasurable value today. At the beginning of the last century, for instance, Galileo Chini and Carlo Rigoli respectively frescoed the Throne Hall and the Borom Phiman Palace. Another eminent Italian of note is Corrado Feroci (Silpa Bhirasri), founder of Silpakorn University in 1943 and regarded as the father of modern Thai art. Much later in 1960, important opportunities for strengthening ties further arose from the official visit of King Bhumibol and a series of important treaties that followed in the last decades.

What strengthens this long and lasting relationship?
It is no coincidence that Italy and the Kingdom of Thailand, despite the geographical distance, can count on a long-lasting friendship well rooted in a combination of common values and traditions. Firstly, both countries are products of thousand-year-old civilizations based on promoting peace, stability, justice in political relations and loyalty. It is not surprising that Italy and Thailand are therefore natural allies, remarked the Honourable Angelino Alfano last February – the first minister of foreign affairs of a European country to pay an official visit to Thailand after the announcement of the resumption in political visits between the Kingdom and the European Union (a gesture promptly reciprocated by Minister Don Pramudwinai in coming to Rome in March). Secondly, our two peoples basically like each other and share a respect for history and tradition, a love for family and elders, as well as a welcoming attitude to foreign visitors. Furthermore, Italy and Thailand are blessed with incredible and diverse natural landscapes, full of landmarks such as mountains, lakes, sparkling coastlines, countryside, as well as tightly packed cities on offer to millions of tourists.

Trade has been one of the most important aspects in Thai-Italy relations. Please give an overview of what’s been exchanged between the two countries in the past few decades.
Trade is indeed one of the most important elements in our economic relations. According to data from Thai Customs, Italy’s largest exports in 2017 were machinery and parts. As for Thai exports to Italy, it is mainly automotive parts and accessories.

Over the past decades, we have exchanged a variety of products, ranging from machinery and their components to precious stones and jewellery, from chemicals and pharmaceuticals to food products and luxury cars and motorbikes. Most recently, there have been some important purchases in the aviation industry too. In order to better promote and support trade and investment, a top-level appointment for the biggest commercial exponents of the two countries has been established and held annually since 2015 in the form of an Italian-Thai Business Forum. The 40 large- and medium-sized company members represent approximately $500 billion in financial assets. Large investments such as Ducati and Danieli in Thailand were finalized for both countries, plus let us not forget the acquisition of the La Rinascente luxury retail chain in Italy by Central Group. What about education and cultural collaborations? What major projects or initiatives have governments of the two countries shared so far?


The Italian Festival in Thailand 2018 is by far the Embassy of Italy’s biggest initiative in 13 years. On the year that marks our 150th anniversary in bilateral relations, this special edition of the festival has been designed to celebrate such an achievement in an unprecedented way. A total of 69 events spanning 299 days have been programmed in all kinds of genres: classical music, jazz, opera, cinema, literature, dance, cuisine, promotion of our “Made in Italy” brand and lots more. Indeed, the aim is to bring to Thailand the best that Italian culture has to offer, since we believe that cooperation between our two countries should naturally develop through a mutual understanding and appreciation of each other’s heritage and cultural identity. For the occasion, the Embassy of Italy has requested the Italian composer Arnaldo de Felice to compose an original piece to mark this anniversary, one whose premiere was held in February at the Prince Mahidol Hall and performed by the Thailand Philharmonic Orchestra conducted by Maestro Alfonso Scarano. Another important project worth mentioning is the donation by the Embassy of Italy to the city of Bangkok of the “Italian-Thai Friendship Sculpture”. Created by the Italian-Thai Artistic Foundry “MonzArt”, which is based in Rayong, the sculpture was funded by the generous contribution of Central Group, as well as by the cooperation of BMA, which enabled its installation in Lumpini Park. The Embassy of Italy has also been a founder and strong supporter of the Italian Thai Youth Orchestra. I deem this project to be of great significance, because their first performance will coincide with the 150th anniversary of the signing of the first treaty between the kingdoms of Italy and Siam on October 3, 1868.

Italy is home to 53 World Heritage Sites, the most in the world, and is the fifth most visited country. How does the Italian government preserve and at the same time promote them for tourism? Is there anything that Thailand can learn from?
Tourism bound for Italy has grown at an accelerated pace over the last few decades with around 55 million tourists travelling there each year. The 53 sites on the UNESCO World Heritage list are spread throughout 18 of the 20 regions which make up Italy and have proven to be a powerful factor in attracting tourists. At the same time, tourism also plays a key role in the protection and enhancement of these sites. Italy wishes to focus on high-end tourism products and services that will encourage responsible behaviour in foreigners visiting our countless heritage cities, historical assets and natural beauties. We believe that our wonders belong to everyone and should be preserved for future generations, a principle on which the World Heritage Convention is based. The challenge ahead is how to merge our convictions with our greater concerns over the impact had by tourism. The answer is through sustainable tourism, which represents the only way to ensure the safekeeping of our natural and cultural heritage. The future of tourism in Thailand will equally come to rely on sustainable practices, the offer of environmentally and nature-friendly itineraries, full respect of local economies and the promotion of a slow, emotional and conscious journey. I am sure that Thailand possesses substantial capacities in addressing this big challenge.

How is the tourism exchange between the two countries? What do we like most about each other?
After eight years of year-on-year growth, in 2017 we counted about 265,000 Italians visiting Thailand. That same year the Embassy of Italy issued almost 33,000 visas in favour of roughly 70,000 Thai citizens travelling directly to Italy or via other Schengen countries. Therefore, I would say that tourism exchange between our two countries is quite impressive. This is the reason why the Italian Tourism Authority ENIT is planning to open an office in Bangkok. I think Italians love Thai culture, food, beaches and weather, while Thai people are attracted to Italian cities for their art, food, wine, fashion and design.

How do you see relations between the two countries looking forward?
In my opinion, the achievement of a 150th anniversary in diplomatic relations already reflects a deep-seated friendship between our peoples and nations. I am confident that bilateral relations will continue without difficulty. Italian and Thai people are committed to the same values and have a very compatible approach to life. The exchange of official visits has remarkably increased and this year has been packed with meetings and new opportunities. This image of a closer relationship between Italy and Thailand should be reflected in the increased value of bilateral trade as well. As the country heads towards the Thailand 4.0 era, I am certain that opportunities in trade and investment will be capitalized on by both of our business communities, while the Italian expat resident community is growing year after year.