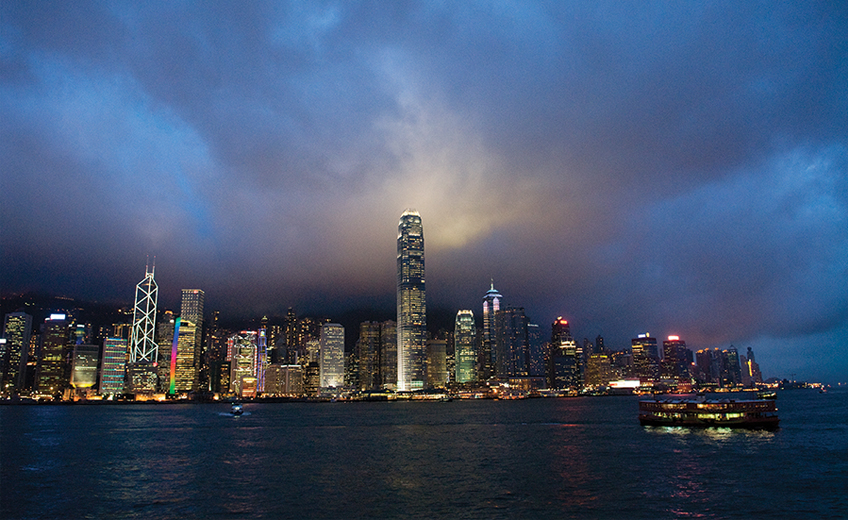 It was my first night in Hong Kong. I found a perfect spot along the Tsim Sha Tsui waterfront promenade and sat patiently with my camera, humbled by one of the world’s great panoramic views. Below me, rusty Chinese junks, barges and the ubiquitous green and white Star Ferry boats criss-crossed Victoria Harbour as the distant lights of Hong Kong Island’s towering skyscrapers began to outshine the fading daylight.

I watched as the already spectacular skyline came alive in a brief but impressive performance to celebrate the energy, spirit and awakening of Hong Kong. Synchronized to a lively soundtrack, brilliantly coloured neon searchlights and laser beams danced above, around and within buildings on both sides of the harbour in the world’s largest multimedia extravaganza. For many, the Symphony of Lights has become one of the “must see” events on any visit to the increasingly accessible Jewel of the Orient. For me, it was an unexpected introduction to a complex city where cultures overlap and ancient values collide with a prosperous modern world.

As I wandered the streets of Hong Kong for the first time, there was something surprisingly familiar about the city. It was at first a bit overwhelming, but as I began to appreciate the rhythm of the western style metropolis, I grew increasingly comfortable navigating the public transportation system and exploring the colourful winding alleyways tucked beneath the soaring glass and steel. While the dignified transition of sovereignty back to the Chinese in 1997 is for most a distant memory, the British colonial history of Hong Kong has shaped the territory into one of the most unique political, economic and cultural contradictions in the world. Glittering shopfronts, shopping centres, global brands and having English infused into every part of life contribute to a cosmopolitan blend of East and West that was a century in the making. The modern history of Hong Kong begins with the 19th century Opium Wars. To balance a trade deficit, the British East India Company began exporting opium into China from Bengal. In 1820, the Chinese emperor banned the drug trade, inspiring Great Britain to send warships and soldiers from India to seize Guangzhou. In January of 1841, the British flag was raised over Hong Kong.

Following a second Opium War, the British consul secured a lease for Hong Kong and Kowloon in perpetuity. This was later expanded at the Second Convention of Peking in 1889 to include the New Territories and hundreds of islands for a period of 99 years. As the handover grew closer, it became impractical to separate the three areas and only return the New Territories.

In 1941, the Japanese invaded Hong Kong from the north, forcing the British to surrender. During the three years of Japanese occupation, nearly two-thirds of Chinese living in Hong Kong fled to mainland China. Following the end of World War II, and continuing during the reign of Mao Zedong, the Chinese population in Hong Kong again swelled. By the 1960s, the garment, textile and manufacturing industries were well established, and Hong Kong’s prosperity grew rapidly. Finally, in June of 1997, the British Union Jack was forever replaced with the now-familiar red flag of the People’s Republic of China. Now home to almost 7 million people, Hong Kong is divided into four distinct areas: Hong Kong Island, the Kowloon Peninsula, the New Territories and the Outlying Islands. Most visitors spend a majority of their time shopping, sightseeing and dining in densely populated Kowloon and Hong Kong Island. While it is probably quicker to get between the two areas on the convenient Mass Transit Railway (MTR), the Star Ferry has been shuttling back and forth across Victoria Harbour for more than 100 years. The inexpensive eight-minute trip is a Hong Kong tradition and an exciting way to take in the harbour views.

From my hotel in the central district of Hong Kong Island, I spent a full day easily traversing the island on the MTR, spending much of my time between the ordered chaos of Des Voeux Road and the narrow “lanes” lined with shops and stalls selling clothing, fabrics and discount fashion accessories. Just north of the shiny malls and shops, the unique Central-Mid-Levels Escalator brings residents and tourists into traditional Chinese neighbourhoods. Completed in 1993, the world’s longest outdoor escalator is comprised of 20 sections, starting at Queens Road Central and running halfway up Victoria Peak to residential towers above the revitalized area known as Soho (South of Hollywood Road), famous for its cafés, restaurants and nightlife.

After mastering the MTR, I was determined to experience the double-decker fleet of electric trams known locally as the “ding ding”. On what I called “tram day”, I left my hotel just after morning rush hour and went to the local tram station. I watched and learned as scores of people got on and off the eclectically painted icons of the city. My goal was to ride all the way across town to Causeway Bay to visit Times Square and the street markets on Canal Road. After going in the wrong direction, I redirected myself and settled into a seat on the top floor of the tram for an unforgettable city tour. Following a couple days exploring Kowloon and Hong Kong Island, I took an early morning taxi to Outlying Islands Pier No 6 to catch the 50-minute “ordinary ferry” to Lantau Island. As we left Hong Kong Island, the weather turned cloudy, creating a mysterious silhouette of Victoria Peak and the skyscrapers that define the skyline.

After disembarking on the largest of Hong Kong’s islands, I joined a tour group to Tau O, a gritty and authentic fishing village on the northwestern coastal edge where locals build their homes on stilts. The village has become popular among tourists as a living glimpse into Hong Kong’s historic past. I wandered the small streets and markets for more than an hour before taking Bus No 21 to the Giant Buddha and Po Lin Monastery.

The central spine of Lantau is dotted with small Buddhist monasteries. Dating back to the 1920s, Po Lin Monastery is one of Hong Kong’s top attractions. But the big draw to Po Lin is the 34-metre bronze Buddha that sits majestically atop Ngong Ping plateau. Weighing 250 tonnes, the Big Buddha was unveiled in 1993 and quickly turned the serene mountain monastery into another “must see” tourist attraction. Visitors are invited to climb the 268 steps to the platform where the Buddha is seated.

My excursion to Lantau ended with an exciting 25-minute cable car ride on the Ngong Ping 360 Skyrail to Tung Chung village and an MTR station where I made my way back to Hong Kong Island underground. As the Big Buddha slowly disappeared behind the lush mountains of the plateau, it was replaced with breathtaking views of the South China Sea and Hong Kong Airport. For several days I had hoped for a clear afternoon – without much luck. I arrived on a sunny beautiful day, but the days since were a mixed bag of overcast and drizzle with occasional sunny moments that lasted just long enough to get me excited. My last night in Hong Kong had arrived, and I had yet to take the Peak Tram to view Victoria Harbour from the Sky Terrace. I had no choice but to go.

Rising 396 metres above the sea, the Peak Tram has been in operation since 1888. Built originally to transport privileged residents to their mountain retreats, the funicular railway hasn’t had a single accident in its long history. From 1904-1947, the Peak was an exclusive residential community for colonial expatriates escaping the summer heat of the city below. Today, the touristy Peak Tower attracts nearly 7 million visitors a year. It was renovated in 2006 to include new shops, restaurants and attractions like Madame Tussaud’s waxworks and EA Experience for interactive gamers.

Rising another 30 metres on the top of the Peak Tower is the Sky Terrace. I arrived an hour before sunset and found a pretty clear view of Victoria Harbour. Several other photographers also claimed spots along the railing and set up tripods as darkness consumed Hong Kong. There was no sunset to speak of, but as the electronic signature of a modern city emerged from the night, an awe-inspiring vista again left me humbled as I attempted to capture the enormity of the man-made landscape below.