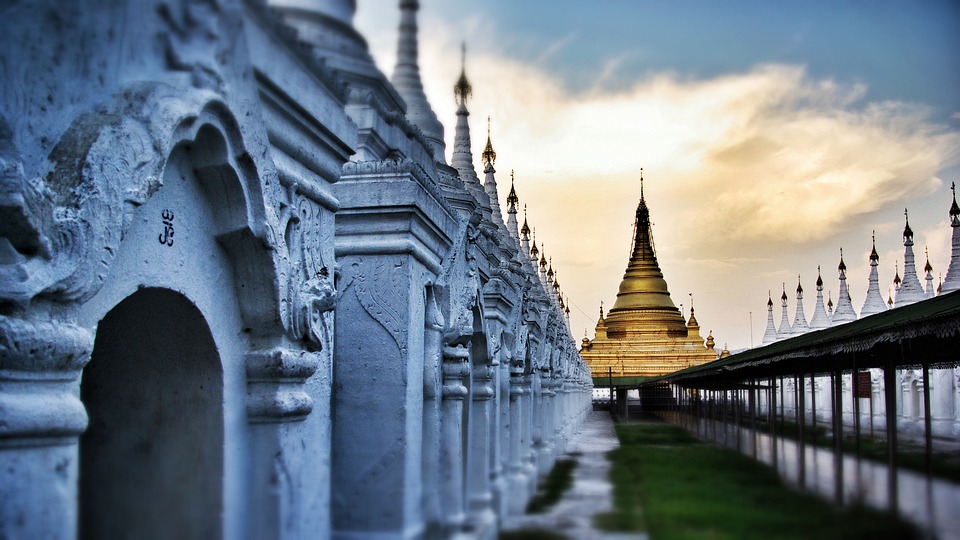 A pilgrimage destination for all Myanmar Buddhists

This is an excerpt written by James Haft from the e-book, Borderless Thailand, produced for the Tourism Authority of Thailand. Myanmar’s second largest city, Mandalay, was Myanmar’s last royal capital and remains the country’s cultural center. It’s not very old, established in 1857 by King Mindon who chose to move his capital from nearby Amarapura to below the watchful gaze of Mandalay Hill. Known then as Yadanabon, i.e., “City of Gems”, it still has the largest jade and gem trading markets as well as neighborhood grinding out marble Buddha images. Set along the eastern bank of the Irrawaddy River, the port is still quite active. Not as romantic as Kipling made it sound, the British laid out the city in a very organized grid once they made it their northern colonial seat; however, most of it was laid to waste by aerial bombing during World War II. Rebuilt after the conflict and now bursting up and outward with new construction, particularly from Chinese investment, the city remains dusty and clogged with motorcycles, cars and trucks. Still, it has some of the most sacred ancient teakwood monasteries and glittering gold pagodas as well as Hindu temples and mosques. The best time to visit Mahamuni Temple is at 4.00 am. when the venerated, nearly four-meter-tall seated “Great Sage” Buddha image has its face ceremoniously polished. Reverence towards the Mahamuni seems to permeate through the pagoda, even during the walk through one of the four, long, congested passages crammed with stalls. While thousands of faithful Myanmar Buddhists are attending this rite, outside the paya, with its multi-tiered gold roof, sparkles in the dark and then as daylight ascends. Throughout the pagoda, the soft chanting of the faithful softly fills the air. It is said this image is over 2000 years old and one of five true likenesses of the Gautama Buddha. It was seized from Mrauk U by King Bowdapaya who had it dragged to Mandalay in 1784. This legend is depicted in a series of 1950 paintings on display at the northeast corner of the courtyard. Below the serenely smiling face of the Buddha image, his somewhat feminine torso has grown more than six inches thick and knobby over the years as men, women are not permitted, affix gold leaf as an act of devotion. After all the glittering gold, the serene Shwenendaw Kyaung is a welcome change. Constructed of teak with intricately carved bas-reliefs of Buddha images, the Jataka tales, deities and angels, this 19th-century structure was originally the royal apartment of King Mindon at his palace in Amarapura. When he moved his capital to Mandalay, he brought his residence with him. But after he died, his son, King Thibaw, fearing it could be haunted, had it moved from the palace grounds, thus, its name in English, Golden Palace Temple. If it wasn’t for this, we would not have this rare example of pure Myanmar architecture, as the original palace was destroyed by bombing during World War II. Once gilded in dazzling gold that has all disappeared, it has been left natural in soothingly dark and warm contrast. Inside, a Buddha image sits quietly in what appears to be enlightened contemplation. As an active monastery since 1880, a small community of monks resides here in the shaded tranquility of a massive Bodhi tree. Close by is the reconstructed Atumashi Monastery, which is quite impressive because of its size. Billed as the “Largest Book in the World”, the Kuthodaw Paya, which means Royal Merit Pagoda, comprises 729 Dhamma Ceti that each enshrine a marble tablet with both sides inscribed with a page from the Tripitika in Pali language, recounting the teaching’s of the Lord Buddha. Started at the same time as the Mandalay Palace at the foot of Mandalay Hill, it took eight years to complete this act of devotion. At the same time, the central gilded stupa that stands 57 meters tall was constructed. When the British seized Mandalay, they turned the Kuthodaw into a garrison and vandalized the monastery, stealing gold and jewel-studded ornaments. Following World War II and the British leaving, restoration began, taking several decades to complete. Also known as the White Monastery because of its columns of ivory shrines lined up like soldiers. They are accessed through four ornate gateways with multi-tier Pyatthat roofs and long corridors from each direction. Faithful Buddhists come daily at all hours to pay homage to the gilded Buddha image at the end of the walkways before or after strolling through the pages of the world’s biggest book. At sunset, when the lighting is best, the mood on U Bien Bridge, the world’s longest teakwood footbridge, is one of romance as couples of all ages stroll leisurely hand in hand caressed by the evening breeze. At sunup, the foot traffic will be lines of monks leaving their monastery, Maha Ganayon Kyaung, on the eastern shore to beg for alms while villagers commute to work. Sweeping gently 1.2 kilometers across Thaungthaman Lake, named for an ogre that came in search of the Buddha, the bridge was built between 1849-1851 with wood reclaimed from the former palace in Inwa. This was actually just before King Mindon began to move his capital from Amarapura, “City of Immortality”, now a quiet suburb of Mandalay. The bridge is erected on 1086 posts. Originally, teakwood pounded two meters into the lakebed, most have been replaced by concrete pillars. During the dry season, they stand as many as four meters above the shallow body of water and vegetable patches while during the monsoons, the lake rises so high that it laps the slats of the bridge. At any time of year, it is a sight to behold and contemplate where you have been and will be going.