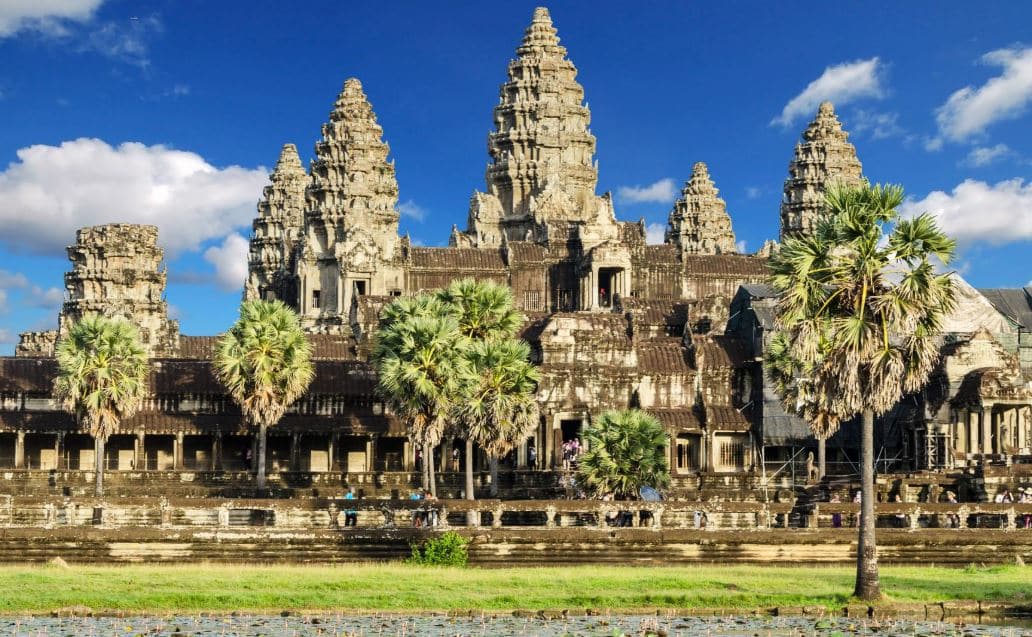 This is a revised excerpt from the e-book, Borderless Thailand written by James Haft for the Tourism Authority of Thailand. A short drive on Highway 6, about 30 kilometres, from the Aranyaprathet-Poipet Thai-Cambodian border brings you to Serei Saophan, formerly known as Sisophon, the tiny capital of Khaet Banteay Meanchay, the Fortress of Victory. Here, you will be greeted by “The Good Wife”, a giant, shapely, relatively young sculpture that reflects the perfect Cambodian spouse. Since the 13th century, Serei Saophan has served as an important crossroads and trading post under the control of the Khmer, then Thai, French and once more Cambodians. If you continue east on Highway 6, you’ll arrive at Siem Reap and one of the “wonders of the world”, Angkor Wat. The road south, Highway 5, leads through the lush, verdant paddy fields of Cambodia’s rice basket to Battambang, the very quaint capital of the khet, or province, of the same name, praised for its preservation of French-Indochine architecture with French villas lining the banks of the Sankhae River. With these attractions, few people head north on National Highway 69 to discover the ancient ruins of Prasart Banteay Chhmar, the Citadel of the Cat, and the sleepy town that has sprung up around it. Built by King Jayavarman VII in the 12th century as a memorial to his late son, Prasart Banteay Chhmar, the fourth-largest Angkorian complex, was one of the largest Buddhist monasteries of the period. Today, under the supervision of the Banteay Chhmar Community Based Tourism organization and the assistance of the Global Heritage Fund and Heritage Watch, it has slowly been restored. And with just a few thousand visitors compared to the many millions visiting Angkor Wat, it is one of the most serene and least disturbed ancient Khmer settings where you can imagine what once might have been. Within the confines of a nine-kilometre-long moat and wall are internal galleries with intricately carved bas-reliefs on stone walls depicting court and village life at that time. After these come renderings of the Khmer defeat of the invading Cham in battles on sea and land. Most impressive are the two remaining Bayon-style, four-faced, eight-armed statues of the Avalokiteshvara Bodhisattva of Compassion at the western gallery wall. Rising above the ramparts are ten of the once 56 towers, half of which had four faces. Growing in and around the ruins are massive broadleaf trees, the ancestors of those that provided a similar welcoming shade when Angkorian culture reigned. In addition to the Banteay Chhmar Community Based Tourism temple tour, homestays and restaurant, the organization is also promoting the preservation of a delectable treat, Dalambok, or Pounded Flat Rice. The preparation process can be quite arduous after dry-frying the rice in a wok as usually two women pound and pound the rice flat before it’s served or possibly mixed with coconut and banana. Dalambok is the special treat served on Bon Om Touk, the Cambodian water festival which, like Thailand’s Loy Kratong, was just celebrated on the full moon of the 12th lunar month when the rice is harvested and the currents of the Tonle Sap reverse their flow. The holiday is also celebrated by holding exciting longboat races. Another very interesting, local attraction is the Soieries du Mekong Silk Centre. Soieries can be translated from French as silk factories, and it is here that local women are trained in the art of preparing and weaving silk fabrics as well as making clothes. At the centre, you can watch as silk is cleaned, dyed, warped, knotted and woven, mostly into scarves after which the ends are fringed. While some women stay at the end of their course to continue to do the prepping and finishing, most are given looms so they can work at home. Established by two NGOs – Enfants du Mekong and Espoir en Soie in 2001, this enterprise has provided a means to supplement the income of hundreds of families. Before departing Banteay Chhmar, a visit to Prasat Ta Prohm is a must. Discovering the prasat in the jungle offers insight into what it must have been like when the Portuguese Capuchin Friar Antonio da Madelena first saw Angkor Wat in 1589 or when Henri Mouhot rediscovered it nearly 300 years later in 1860 shrouded in jungle. After walking along a short, narrow trail, you will be greeted by an enigmatic face gazing through the dense foliage. The roots of banyan and kapok trees grow through, in, up and over the stone ruins. There are holy trees wrapped respectfully in old saffron robes with the residue of white talcum powder sprinkled as worshippers sought lucky numbers to play the lottery. Inside the tower, there is also a stone alter with melted candles, burned incense and offerings to the ancient spirits that are believed to still reside here. What is most remarkable about Banteay Meanchay and Banteay Chhmar is how quiet and undisturbed the towns, ruins and life remain. There is no hustle or bustle or crowds to deal with like in Seam Reap and Angkor. It gives you a chance to see the past and how the local Khmer are preserving their traditional way of life.