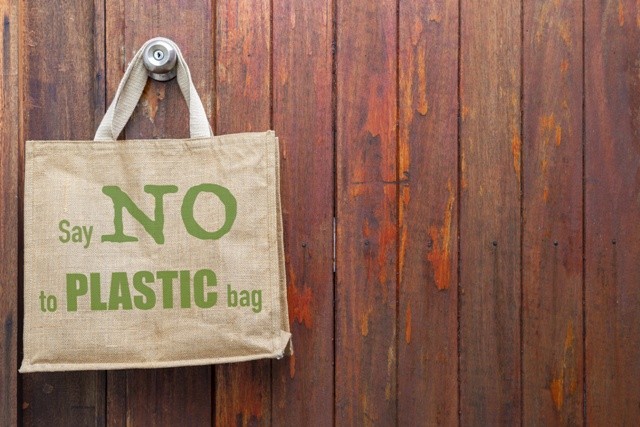 The clock struck twelve. The fireworks filled the sky over many parts of the Chao Phraya River as well as Central World. The revelry seemed to reverberate throughout the Kingdom. At the same time, as people celebrated the New Year, there were many applauding the ban on single-use plastic bags that came into effect at midnight with the Thai Retailers Association campaign, “Every Day Say No to Plastic Bags”.

This is just the first phase with all 75 members of the association no longer giving free plastic bags with purchases at their approximately 24,5000 distribution channels. The Government says a complete ban will be enforced a year from now in 2021. A number of news stories about the death of land and marine wildlife, a deer, a dugong, sharks, whales and sea turtles, caused by them ingesting plastic waste helped to increase public concern. Public awareness was also raised by both government and private sector campaigns.

On New Year’s day, after handing out reusable bags, Minister of Natural Resources and Environment Varawut Silpa-Archa told reporters, “Thailand was ranked sixth among the world’s top countries that dump waste into the sea. During the past five months, we dropped to 10th ... thanks to the cooperation of the Thai people.”

Last year, after the Government began encouraging the public to voluntarily refuse accepting plastic bags when shopping, according to Reuters, the Ministry of Natural Resources and Environment said the number of plastic bags distributed dropped by 2 billion, or as much as 5,765 tonnes, which is valued at approximately 400 million baht. Through a campaign launched by the owners of 7-Eleven, CP All, much of the money saved has been donated to hospitals.

Now, many more major retailers, superstores and supermarkets have stopped giving plastic bags to customers to carry their purchases away. Villa Supermarket began training their customers last year by not giving single-use plastic bags on the fourth and fourteenth of every month. They did sell a reusable cloth bag then, but it cost 20 baht. After the New Year, they began selling less substantial reusable bags for 5 baht, which shoppers said was much more reasonable. While 7-Eleven convenience stores say they no longer give customers plastic bags in accordance with the new law, employees have been heard asking customers whether they want a bag or not, possibly trying to help people adjust their behaviour.

Minister of Natural Resources and Environment Varawut Silpa-Archa said the next big challenge will be educating and encouraging the rural populace to give up plastic bags, particularly at the fresh markets. According to Reuters, these areas account for as much as 40 percent of Thailand’s plastic waste. France 24 reported a new concern voiced by Pichmol Rugrod of Greenpeace when she explained that the cheaper reusable bags that are being distributed are produced with fibre spun from microplastics which will create another problem, as this has a negative, polluting effect on the soil and water because of the chemicals they are produced from.

Meanwhile, on Friday, 3 January, Starbucks Thailand said it will begin providing paper straws to customers in all stores nationwide on 6 January. The company said this has been planned for a while. Still, it does seem quite apropos in support of the campaign to reduce single-use plastic. Starbucks Coffee also said they plan to eliminate plastic straws in all their stores worldwide during the coming year.