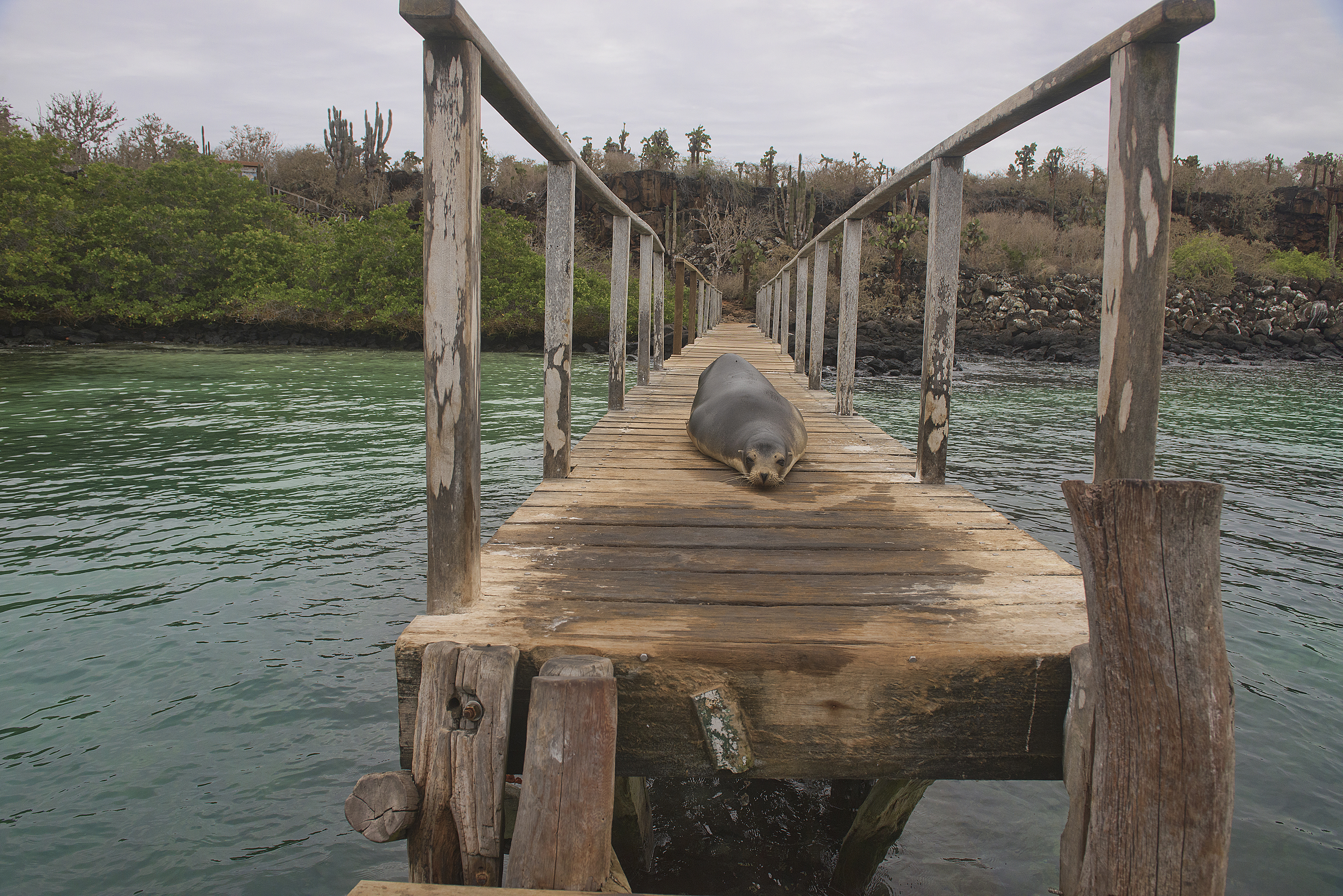 After a few weeks in the Galápagos Islands, you become somewhat immune to the epic proliferation of absurdly tame wildlife. Where else on the planet will bull sea lions waddle up to your beach towel, as if trying to take over your sunbathing spot? Where else can one stroll down to a beach bar for happy hour, only to find the best seats taken by snoozing sea lions or perhaps pelicans drying their wings? It seems that on the enchanted isles, you’re constantly tripping over your heels to avoid stepping on marine iguanas, dodging rainbow-coloured Sally Lightfoot crabs (most charmingly named after a Caribbean nightclub dancer!), or having to join a queue of stalled hikers or cyclists while an immense giant tortoise leisurely makes his way across the road. Most folks think that a journey to the Galápagos is the trip of a lifetime, or at least the dream of a lifetime, due to the need to either win the lottery, rob a bank, or cash in a year’s worth of pay checks in order to afford the prohibitively expensive cruises to get to the remote Pacific isles far off the coast of Ecuador. Yet while the cruises are quite exorbitant, few know that the Galápagos do have several islands with human habitation and development, and it’s just as easy to base oneself on one or two of them, take day tours out to other islands, and see plenty of wildlife and stunning scenery, without having to face bankruptcy. My wife and I spent several weeks on Santa Cruz, San Cristobal, and Isabela islands, constantly amazed on a daily basis not only by the endemic bird and marine life populations (many of the species here are found only in the Galápagos), but even more by just how tame and fearless they are (something visitors have been astounded by since Darwin first noticed it in 1835, on the HMS Beagle’s first journey here). It’s not just the frolicking sea lions. We had manta rays with fins the size of the great white in Jaws surrounding our boat, sharks swimming just metres below our feet while snorkelling (yet completely ignoring us), and unbelievably charming blue-footed boobies hatching their chicks just a few feet away, seemingly unperturbed by our presence. Fierce-looking primeval marine iguanas sit en-masse along bike paths or walkways, daring you to step on them, and even the tiniest finches come right up to your feet – or even your face – curious above anything else. While all of the species here are protected as part of the national park, our guide Maria tells us that the animals themselves have also adapted to “being safe”. On an island with almost no predators, there is no need to build up defences or even have a flight or fight response. Skittish creatures, while well-programmed for escaping, use a lot of energy, and that energy would be wasted here. Instead, the Galápagos inhabitants use their daily calories for sitting in the sun, doing elaborate mating dances, and drying their wings and fur. Outside of a period of whaling in the 1500-1600s, the Galápagos have been pretty much left alone, and even when predators such as goats or rodents were introduced, National Park authorities were quick to step in – for example, eradicating all the islands’ goat populations several years ago to ensure the survival of other species. The Galápagos first received their name “Las Islas Encantadas” (the Enchanted Isles) from early visitors who thought the islands appeared as if by magic, as they were constantly shrouded in fog, and would suddenly appear as if by miraculously conjured into existence. Yet the islands weren’t always such a magical place. The heavy mist made for the perfect escape route or staging area for pirates, and Ecuador couldn’t even get buyers when they oft tried to sell the islands to Europe and the US through the early 19th century, as they were not well populated nor easy to exist on, comprised of cacti and black volcanic rock, with dense spiny forests, sharp stony beaches, and heavy surf barring access to many of the islands and their interiors. All this changed of course after Charles Darwin arrived and marvelled over 13 species of finches, which are still seen on the islands today. On one island, finches otherwise similar to those on another, had longer beaks, which Darwin surmised were used for catching insects, which were not as abundant on another island where the beaks were larger and more adapted for cracking open nuts. These observations led to his theories of evolution and natural selection, and put the Galápagos firmly on their way to being the world’s premier eco-tourism destination. While only 3% of the islands are allowed to be inhabited by humans, a rise in Galápagos tourism by close to 15% the last few years means the islands are approaching the limit in terms of what the fragile ecosystems can withstand (last year 250,000 visitors arrived). The park service and government do a decent job already, with practices such as banning plastic bags from the islands’ supermarkets and shops to having the Galápagos Airport on Isla Baltra running solely on solar and wind power, yet it remains to be seen how the Ecuadorian government can strike a balance between wanting more tourist dollars and the need to ensure that the Galápagos don’t go the way of many other World Heritage sites. For now, the islands remain one of the world’s most magical spots. On our last day on Isla Isabela, we took a small boat out to Los Túneles, a series of surreal lava tunnels home to some of the best snorkelling we’d experienced, with sharks, seahorses, and even giant tortoises swimming within an arm’s length. Even more impressive was what waited for us on the surreal cacti and lava-strewn land, as we came across a male blue-footed booby (so named for their big clumsy blue feet). This one was busy doing a courtship ritual, in which he did an extremely foolish dance much like a Monty Python silly walk, showing off his webbed extremities, and then proceeding to offer the female a stick as a token of his love! The female accepted, and as we rounded the bend, others obviously had as well, as we came across several females sitting on their eggs, and even a couple of several day-old chicks struggling to try and walk. Oblivious to us, the beautiful birds got on with life as we jostled for camera positions. Moments like these were priceless, and I pondered buying a few lottery tickets just in other hope of being able to afford to return.