The Evolution of Swiss Cuisine 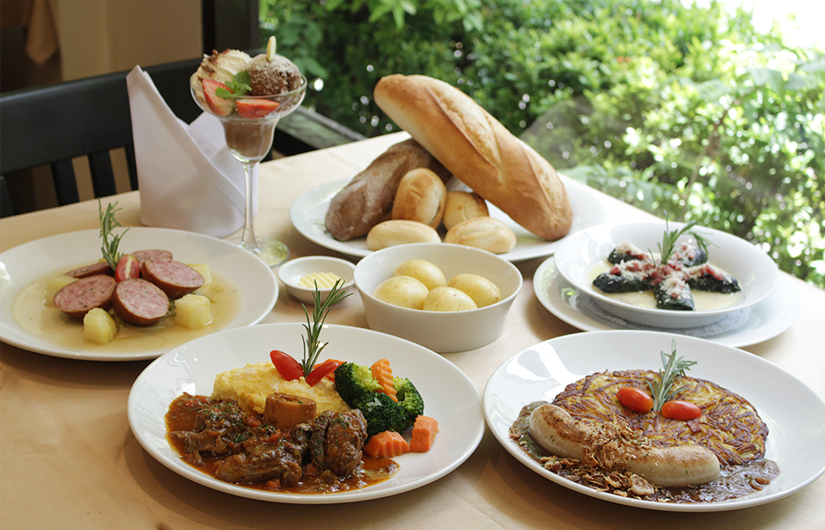 The Evolution of Swiss Cuisine

When it comes to Swiss cuisine, there is a big chance that besides chocolate, Swiss cheese pops up in people’s minds, especially its most representative dish: the fondue. Without getting into a debate about which cheese dish between fondue and raclette represents Swiss cuisine the best, it is true that people do connect fondue with Switzerland. The association is so strong that, in 2019, a red fondue pot with a white cross was entered into the digital age pantheon of the collective universal language, the emojis. After Roger Federer, the fondue is undoubtedly Switzerland’s most popular soft power tool. As is often the case, Switzerland is full of surprises and doesn't always match its stereotype. Swiss cuisine is no exception to this principle. I was very honored to have the opportunity to sit down with HE Ambassador Helene Budliger Artieda of Switzerland at Chesa Restaurant to discuss some unexpected facets of Swiss culinary heritage, focusing on the fondue, but “with a twist” this time. The owner of the restaurant, Mr René Kuhn, prepared a fantastic fondue mixed with Thai spices - a real treat: a successful marriage where Swiss cheese and Thai spices bring out the best in each other. Not on the menu, this “fondue with a twist” is our inside tip of the day.

We began by discussing the history of Swiss cuisine as Ambassador Helene explained, “Our culinary story is influenced by Germany, France and northern Italy. As a landlocked country, the traditions of Swiss cuisines have also evolved, influenced by climatic conditions and farming methods.  Moreover, our different regional traditions have resulted in various unique specialties. It is also interesting to note that many famous Swiss dishes are the results of creativity due to a lack of different ingredients. In the mountainous regions, for instance, the rural population, often poor in comparison to the industrial cities, rely more on products they produce locally such as milk, cheese, meat, vegetables and cereals. Meanwhile, over the years, gastronomy has managed to flourish in the Swiss cities. Innovative chefs have been creating new and delicious dishes such as refined pastries and our world famous Swiss chocolate.”

When asked about the popularity of Swiss cuisine, Ambassador Helene candidly commented, “Aside from fondue, Swiss Chocolate is well known worldwide and appreciated everywhere. This famous treat is renowned all over the globe. The popularity of Swiss milk chocolate is undisputable among chocolate lovers. We have many brands available in the markets, with Toblerone one of our best known. The brand was created in 1908 by Theoder Tobler by mixing milk chocolate with honey and almond nougat for its unique taste. It is believed that the name Toblerone is a combination of its creator’s surname. Tobler, with the Italian word “torrone”, which describes a honey and nut nougat treat. Toblerone is thus a good example of Swiss cuisine being influenced by a neighboring country, in this case, Italy.” I asked Ambassador Helene, “What makes Swiss cuisine unique?” Her simple answer was, “Swiss cuisine is a combination of basic, natural products and simple cooking techniques, mixed with creativity”. She elaborated further, “The spirit of Swiss cuisine can be found in the Betty Bossy cookbooks. Many Swiss families have at least a few of these in their kitchen. However, please do not be confused as Betty Bossi does not exist.  In fact, she is a fictional character.  The story behind this is the brand originally started off as a leaflet of recipes which  gradually grew to be a successful magazine that expanded further into cookbooks and TV and radio programmes, and even their own brand of foods. Hence, Betty Bossi is recognized as a leading authority on Swiss cuisine with their recipes prepared in households throughout Switzerland and beyond.” Ambassador Helene went on to say, “Swiss cuisine may not be as famous as French, Italian or German cuisine, but innovative Swiss kitchen aids are found in kitchens across the globe! One iconic Swiss gadget is the Rex vegetable peeler, which was invented and patented by Alfred Neweczerzal in 1947. There are also numerous products that many have probably never heard about, for example, Aromat, the Swiss national spice. It comes in a yellow powder form and has a salty taste. It is made from marine salt and different dehydrated vegetables such as celery. In Switzerland, every household will sprinkle it on all their dishes, be it vegetables, eggs, pasta or meat. Many Swiss people consider Aromat as the star of the Swiss kitchen and will even take it with them when they travel. Another very Swiss product is Rivella, a soda drink made from milk serum. Rivella is quite popular among the Swiss population and unlike other soft drinks, it requires more of an acquired taste. And finally, there is Cervelat, which is considered our sausage. It can be eaten both cooked and raw, which probably explains its popularity.” As the ambassador mentioned earlier, Swiss food is influenced by its neighbours while there are also many regional differences. “While we have four linguistic regions, French, German, Italian and Rumantsch, each of our 26 cantons has its own specialities such as Longeole from Geneva, which can actually be quite difficult to find in other areas. For those who love Capuns, a dumpling made of Swiss chard, bacon, onions and cheese in a creamy sauce, they almost certainly must travel to Graubünden.” Swiss cuisine has inevitably seen changes over the years. Ambassador Helene disclosed, “Traditionally, the food served in a household was dictated by its wealth and social status. Gradually, industrialization in the 19th century was followed by democratization of food in the 20th century. An abundance of food came about in the second half of the 20th century, but lately, with our facing climate change and giving an emphasis to sustainability, new generation consumers who feel a responsibility towards the environment are looking for healthier and sustainable options. Despite the fact that Switzerland is traditionally a meat-eating country, it also has a history of healthy and vegetarian dining. One example can be found in Zurich that boasts the oldest vegetarian restaurant in the world, Haus Hilti, which is listed as such in the Guinness World Records. It was founded in 1898, and its history is entwined with “Muesli”, another world famous, healthy Swiss dish. Suffering from bad rheumatism, the founder of Haus Hiltl, Ambrosius Hiltl, followed the vegetarian diet prescribed by the famous Swiss doctor Maximilian Bircher Benner, the inventor of “Muesli”.

When listing the key representative Swiss dishes, next to Muesli and Chocolate, there is Rösti and, of course, Cheese, especially Fondue and Raclette. But did you know that the history of fondue is only about a hundred years old? It came about when cheese started to become a commodity and readily available to the general public. Nowadays, fondue is considered a key representative Swiss dish. In general, it is prepared with cut garlic clove, corn starch, white wine and a mix of grated cheese. A piece of bread is pierced at the end of a long skewer or fork and then dipped into the tasty melted cheese served in a heated fondue pot. A heavenly indulgence, there are probably as many recipes as Swiss people. A lot of variations can be found, for instance, in the region of Fribourg, where Vacherin and Gruyère cheese are mixed to make a “fondue moitié-moitié”. The “Appenzeller fondue” contains Appenzeller, a very salty and spicy cheese. You can also find in many places the “tomato fondue” which is made with Gruyère and Emmental cheese and crushed tomatoes and wine.

As our interview drew to a close, Ambassador Helene emphasized, “Switzerland is a multicultural country, and we have a  vast selection of fusion cuisine. Many restaurants are innovative and blend new ingredients with Swiss traditional dishes. For instance, the Chesa restaurant, where we conducted this interview, prepared a fondue “with a twist”, using Thai spices. This dish is a statement for multiculturalism as it brings the best out of Swiss cheeses and Thai spices. Our Swiss nature is innovative, so next to fusion cuisine, Swiss menus of the future shall see creativity combined with sustainability, using resources such as insects, for example, there already is the Essento insect burger @Hitzberger shops or insect balls @Coop supermarkets. These are isolated examples, but who knows what the future holds?”