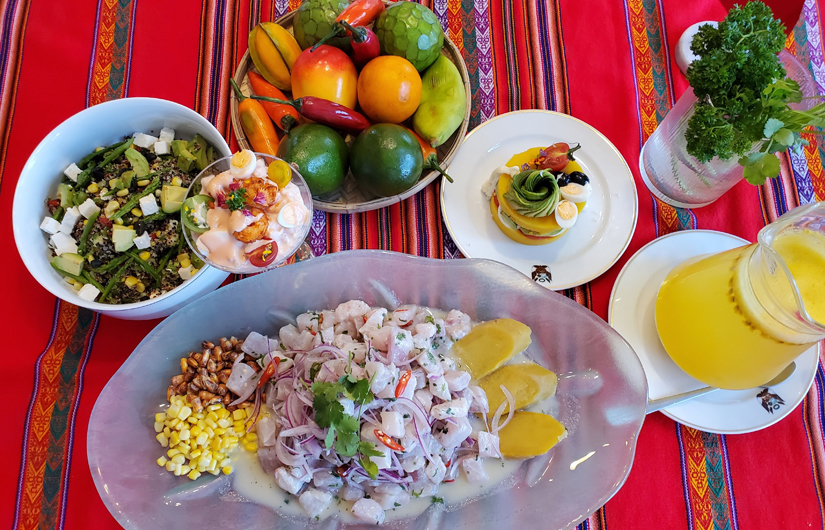 Peruvian cuisine is taking the world by storm with many restaurants in Peru now ranked among the World’s 50 best restaurants. Probably less known in Asia, documentaries on Netflix and cable food channels have started to raise awareness of Peruvian food culture. I recently spoke with Madame Ximena Rios Hamann, spouse of H E Fernando J A Quiros Campos, Ambassador of Peru to the Kingdom of Thailand, to learn about delicious Peruvian gastronomy. When thinking of Peruvian food, the dish that will probably come to many people’s minds is the famous ceviche. However, Peruvian cuisine has so much more to offer as Peru boasts a wonderful biodiversity with 84 of the ecological 103 life zones on the planet found in Peru. Separated into three regions —the Andes highlands, Amazon jungle and a 3,000-kilometre long Pacific coast to the Ocean— the country has also been influenced by European cultures, especially Spanish, Italian and French, along with Asian, Chinese and Japanese, and African. Each of Peru’s dishes has a unique history and distinctive flavours.

One of the staples of Peruvian cuisine is the potato, one of the greatest gifts of ancient Peruvians to the world. 99% of potatoes cultivated worldwide can be genetically traced back to the Andes Mountains. Today, Peru has more than 3,500 varieties of potatoes, the largest in the world, and Lima is headquarters for the International Potato Centre.

In the last 30 years, there has been an increase in the popularity of many traditional and new Peruvian dishes. This boom is due, in large part, to a group of Peruvian cooks led by chef Gastón Acurio who believes that Peru is a “…great nation, with a great living culture, the result of centuries of métissage, mixed cultural integration, and it is precisely this that has made our cuisine a diverse proposal that is now captivating the international public.”

Today, Peruvian cuisine is recognised the world over, with many Peruvian restaurants included in the top of the World’s 50 Best List. In addition, Peruvian embassies around the globe are actively promoting the brand, “Super Foods Peru”, which consists of foods - capsicum, fruits, vegetables, grains, herbs, roots and fish - that are exceptionally high in nutrients. Some of these foods from Peru are not yet so well known in Thailand while others, such as quinoa, blueberries, grapes and avocados, are important products exported to Thailand. Additionally, Pisco, or the Spirit of Peru, is another flagship product that Peru has been introducing to the world. Peru has been named the World's Leading Culinary Destination by the World Travel Awards for eight consecutive years, from when the awards were introduced in 2012 until 2019 and again in 2021.


Peruvian cuisine reflects the country’s history, with its exclusive variety of dishes. Madame Ximena explained, “The history of Peruvian cuisine dates back to the pre-Columbian, Inca and pre-Inca periods. The Incas, known for their unique agricultural and preservation methods, developed their skills growing a variety of grains, potatoes, tubers and legumes on terraces, and these farming techniques have influenced Peruvian dishes up to the present. During the Spanish Viceroyalty, the Spanish brought African slaves to the Americas, and over the years, African culture influenced Peruvian culture. The slaves were talented in creating delightful dishes from discarded ingredients, and many of their creations have become well-known Peruvian dishes such as Tacu Tacu, frijol colado, and anticuchos, the meat of the heart roasted on a metal or wooden skewer.”

Madame Ximena continued, “The real gastronomic revolution of Peru actually began  when immigrants from Asia began to arrive. First were the Chinese, who introduced new frying techniques and ingredients like soy and ginger. Peruvian classic Lomo saltado is possibly where their influence is most evident as it is also found in Arroz chaufa, a rice-based dish that originated from the fusion of Chinese and Peruvian tastes. Later in the 20th century, when Japanese immigrants arrived in Peru, they introduced ways to prepare and cook fish and seafood, which has been elevated to an art form, as seen with ceviche, Peru's national dish, and tiradito, which is similar to sasimi smothered in a spicy sauce .” Madame Ximena proudly declared, “Peruvian cuisine is one of the world’s best. Many dining venues in Peru are ranked among the World’s 50 Best Restaurants (https://www.theworlds50best.com/list/1-50). ‘Central’ in Lima ranks fourth in the world; ‘Maido’, also in Lima, is seventh and ‘Astrid y Gastón’ is listed 4th in Latin America’s 50 Best Restaurants (https://www.theworlds50best.com/latinamerica/en/the-list/1-10/astrid-y-gaston.html). There is a long list of Peruvian restaurants around the world that are publicised in the Michelin Guide.” Peruvian cuisine has resulted in an explosive growth of culinary tourism in Peru. The cuisines of Lima, the North Coast, the Amazon, Arequipa and the Andes as well as Novo-Andean dishes are waiting for all adventurous tourists who come to Peru as Peruvian food offers spectacular cultural and biodiverse combinations of cooking techniques and ingredients, brought to the land from across the globe during centuries of migration.


While Lima is fast becoming the culinary capital of Latin America and a new global gastronomic epicentre, Peruvian restaurants are also mushrooming around the world. Famous Peruvian chefs are building recognition on the world culinary scene. One well-known example is Pía León, who was recently named the World’s Best Female Chef 2021.


Madame Ximena explained, “Peruvian cuisine is also about family, where recipes are prepared by grandmothers who hand them down to mothers or fathers and then daughters and sons. Families tend to meet very frequently and often at a table. La sobremesa, the time after a meal spent at the table, is a precious time as well. It’s the opportunity for everyone to talk and most probably about food.”

Peruvians possess real talent in conserving their traditional culture while seamlessly adapting to modern culinary styles. Peruvian food is characterised by variety. The more popular world cuisines, like Chinese and French, pose no threat to the diversity and richness of Peruvian cuisine. Madame Ximena explained, “Traditional Peruvian cuisine is Andean food. The most common dish that has been prepared the same way for 500 years is pachamanca. Pachamanca means, ‘earth oven’ in Quechua. It is magical and serves as a tribute to mother earth. What makes it most interesting is its cooking method. First, the oven is built by digging a hole in the ground where stones are layered to create a dome shape; then, they are heated by burning logs. After this, ingredients are added in layers: first, sweet potatoes, potatoes and oca; then, more hot stones on top, followed by a variety of marinated meats, after which come the beans and guinea pigs, cuy. Finally, the oven is sealed with leaves, cloth and soil and left to cook and simmer for around three hours.”

Due to the country’s geographic diversity, traditional Peruvian cuisine can be classified into three main regions: the coast (la costa), the mountains (la sierra), and the jungle (la selva). Peruvian food is often referred to as “fusion cuisine”, or comida criolla, due to its blend of Spanish, Asian, Incan and other European influences, which are integrated into the cooking. When asked about modern Peruvian cuisine, Madame Ximena introduced Gastón Acurio, the most important Peruvian celebrity chef who has contributed to making Peruvian cuisine known worldwide. In a CNN travel interview, Acurio stated that Peru is a mix of indigenous cultures, Spanish colonisers and immigrants— Italian, Japanese and Chinese. He famously declared that he wanted “our people to feel that we were not condemned to imitate others’ cultures or others’ cuisines. We have a beautiful cuisine that deserves to be celebrated around the world.” Chef Acurio has achieved this goal with his empire of over 30 restaurants spread across a dozen countries.

Madame Ximena went on to say, “One modern Peruvian fusion cuisine is known as Nikkei, a combination of Japanese and Peruvian cooking, using Peruvian ingredients, but crafted by Japanese techniques. Peruvian and Japanese cuisines share common ingredients such as rice, vegetables and fish, which help create a natural fusion between the two. Nikkei cuisine is a unique blend of the meticulousness of Japanese preparation and presentation and the relaxed nature of Peruvian culture.

“Novoandina is another modern Peruvian-style cuisine. Dishes contain traditional, native ingredients such as quinoa, maca and yacón prepared in a modern way. One of the first restaurants to introduce Novoandina cuisine is ‘Las Brujas de Cachiche’ in Lima, which only serves dishes originally prepared in the Inca period.”


Madame Ximena said, “The most authentic Peruvian specialties are to be found back home. Popular Peruvian dishes are divided into four main groups, namely potatoes and roots fish and seafood; quinoa and other cereals; and cuy (guinea pig), which is part of our dietary tradition.” For centuries, potatoes were an important staple and primary energy source for Andean cultures. It is estimated that there are over 3,500 varieties. They differ in colour, shape, size, skin texture and taste, but all play a vital role in Peruvian cuisine. Known as Causa, derived from the old Incan Quechua word kausaq, potato, its name means ‘giver of life’. In the most basic form, potatoes are served cold and mashed, layered like lasagne, with avocado, hardboiled eggs and tomatoes, for example. Ceviche is Peru’s national dish, which can be found in almost every Peruvian restaurant. There are lots of variations, but the original is sea bass soaked in lime juice, onion, salt and hot chillies. It is then served with a side dish of sweet potatoes and corn. Peru is one of the most bio diverse places on earth, producing a vast variety of unique and nutritious foods. The most well-known is the ancient Inca crop quinoa. Although often mistaken as a whole grain, it is in fact a pseudo-cereal, a seed that acts like a grain. A goosefoot, the plant is more like spinach and the whole grain wheat. It is often labelled as a superfood since it is not only gluten free, but also contains more protein, minerals, vitamins and fibre than many usual grains and seeds.

Flamed guinea pig has been a part of Peruvian traditional cuisine for around 5,000 years. The whole guinea pig is often barbecued or baked over an open fire, which creates smoky and crispy skin outside with juicy and tender meat inside. It is the staple meat of many households in the Andes while it seems unconventional to Western tourists who see this indigenous animal more as a domesticated pet. Peruvian cuisine with its fusion of local and international flavours has gained a foothold in the global culinary scene. Although rooted in indigenous traditions, Peruvian cuisine has eagerly embraced influences from other cultures including European, African and Asian over the past several hundred years. The result is an exceptional fusion cuisine that reflects the nation's multicultural history.

As our interview draws to a close, Madame Ximena wants to encourage all readers to visit Peru, “Apart from Machu Picchu and our iconic scenery, please come and enjoy the pride and joy of South America, Peruvian cuisine.”